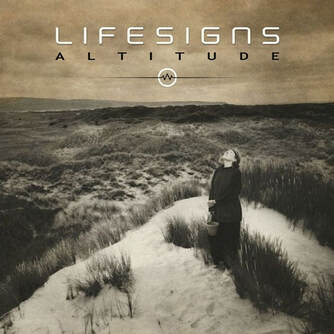 On the album title face of it, Altitude follows the above the clouds musical formwork of previous Lifesigns album Cardington, which featured a long-form title track about the airship world that never came to be.

The 16 minute title track opens proceedings in peaceful and airy fashion, paralleling the quiet beauty of being alone above the clouds ("as far as my touch can feel, of the air that surrounds me now… float like a cloud on the breeze") before dipping, banking and pitching through a musically aerobatic display of softer and more intricate passages that merge prog, balladeering and jazz (Zoltán Csörsz’s background in the latter allows the band to stretch a little further).
Additionally there are some lovely choral and classically framed moments, courtesy of guest vocalist Lynsey Ward (of Exploring Birdsong) and cellist Juliet Wolff, respectively.

There’s also more going on in the lyrical skies than would first appear (John Young’s lyrics tend to be left open for listener interpretation or, as is the case here, carry a story with a twist).
The beauty of flight and view from above themes act as a seemingly peaceful introduction only for it to become apparent the story is being told by a drone, whose destination and directive is far from peaceful ("target destroyed… nothing escapes me").

The lyrical arc of Altitude however is a questioning one, leading to an optimistic and uplifting long-form piece that nears its end on a fabulous, melodically crying guitar solo from Dave Bainbridge before returning to the delicacy of the number’s opening remarks via keyboard atmospheres and the emotive violin of a third guest,  Peter Knight.

The atmospheric 'Ivory Tower' (an older John Young song) clearly carries personal meaning for its composer.
Indeed the lessons learned lyrical theme, along with the song’s delicate introduction (featuring Robin Boult on acoustic guitar) point to a soul-baring John Young in solo singer-songwriter mode but here in the company of his Lifesigns bandmates, who kick in on the second half of the number with a punchy groove that complements and supports the "I Fall down!" vocal cries.

'Shoreline,' built atop Zoltán Csörsz’s shifting rhythm and Jon Poole’s distinct bass lines, is the jazziest number on the album yet remains wholly accessible through reflective passages, melodically charged chorus cries of "Save me!" and Dave Bainbridge delivering in fine six-string style atop the pacey, Csörsz-Poole driven conclusion.
'Shoreline' is also a fine example of Lifesigns being able to conjure up moments of Lukather/Toto one minute and a band such as UK (there are definite comparisons to the latter) the next.

The ten minute 'Fortitude' hearkens back to the band’s progressive yet melodically accessible style (to the point of being delightfully popgressive in places) of the self-titled debut.
Good news for the more prog orientated fan then that such melodically driven rise and harder edged fall (along with well-placed backing/ counter-vocal arrangements) remain part of the band’s repertoire.

The band drop from altitude to sea level to close out on safe harbour ballad, 'Last One Home.'
Preceded by the short instrumental 'Arkhangelsk' (a nod of tribute to John Young’s work with John Wetton on the latter’s Arkangel album) 'Last One Home,' originally performed by the short-lived Qango (featuring Wetton & Young, Carl Palmer and Dave Kilminster) has since become a fan favourite set closer.
A genuinely moving and highly emotive number ("you’ll be the last one home… the sea won’t get you tonight"), the fully Lifesign’d version features one of Dave Bainbridge’s finest and beautifully expressive solos to date.

As 'Last One Home' fades out on seagull cries, a short reprise of 'Altitude' fades in to end on its more hopeful conclusion ("and I could be so much better… in this empty space").

Altitude requires multiple plays to get the best out of its subtleties and shades, but the end result is an album that’s as lofty as its title.

Ross Muir
FabricationsHQ
Altitude is available now as a Digital Download to all Pledge funding subscribers.

The CD version of Altitude will be released in March; a Vinyl edition will follow in May.

You can pre-order Altitude on CD or Vinyl, plus other Lifesigns & John Young solo merchandise, here:
https://lifesignsmusic.co.uk/lifesigns-merch

Please note MP3 and FLAC downloads will also be available to purchase when the CD is released in March (and the Vinyl edition in May); CD and Vinyl pre-orders will remain open until those times.
Additionally, anyone pre-ordering will also receive an MP3 download, so you won't have to wait for the physical copy to listen to the album.