Mott - Without any of The Hoople-la
"And now take notice!"

Those were the first four words uttered by Mott singer Nigel Benjamin on the band's 1975 debut album Drive On.
Unfortunately not enough people did take notice and Drive On and follow up Shouting & Pointing became two of the most under-rated and under-the-radar rock albums of the 1970s. 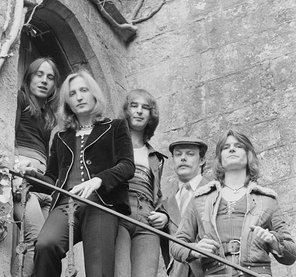 The great British rock and glam band Mott the Hoople had, in effect, disbanded at the end of 1974 when their legendary and charismatic front man Ian Hunter left to form a collaborative partnership with guitarist Mick Ronson, who had joined the Hoople earlier that same year.

It would seem impossible that any form of Mott the Hoople could continue without Hunter, such is his association with the band since their 1969 debut, but in 1975 the Hoople-less Mott surfaced to continue a brand of glam hard pop and roll that their predecessors had so successfully performed during the early 70s.

Replacing Hunter and Ronson were Nigel Benjamin and guitarist Ray Major, while original Hoople musicians Pete "Overend" Watts and Dale "Buffin" Griffin remained to drive the rhythm of bass and drums respectively.
Keyboard player Morgan Fisher, who had joined Mott the Hoople in 1973, completed the quintet.

Mott released two albums in two years but with punk just around the corner and many believing the Hoople story to be over when Hunter left, they were never given the recognition they deserved.
Drive On charted, but charted low (#45 in the UK, #160 in the US), a poor showing in comparison to Mott the Hoople’s last two studio albums, which had been Top 10 and Top 20 UK successes respectively.

However numbers can be deceptive and good, or quality, don't always equate with fashionable, or successful.
Whatever the success, or lack thereof, there is no questioning the level of high-energy fun rock and roll contained within the grooves of Mott's two records.
Nor was either album short in the great hooks and catchy chorus departments.

Drive On and Shouting & Pointing are excellent albums and primary songwriter Overend Watts came up with some great hard pop, a ballad or two and a few proto-punk pieces.
All backed by a pretty able band.

Nigel Benjamin’s vocal could be an acquired taste truth be told, although high tenor singers would soon be more than acceptable in rock and roll.
Although he never had the range of the Geddy Lee’s of the rock world and was perhaps a little thin in overall delivery, Benjamin wasn’t as shrill as the Rush vocalist, certainly when comparing Lee’s vocal from the same time-frame.
(It should also be noted however part of the vocal sound came from the fact most of the tracks were sped up, a decision not of the singer's making and one he was far from happy about). 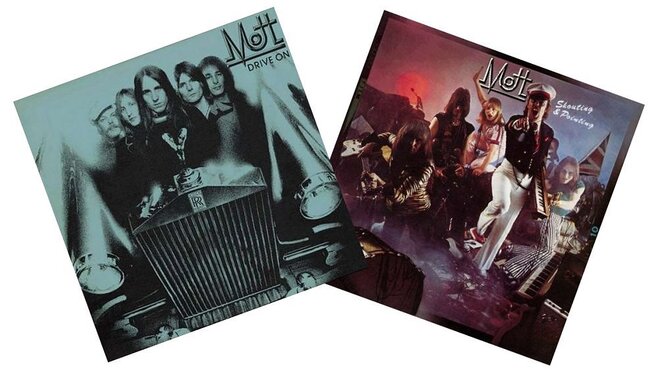 Drive On and Shouting & Pointing, two of the most under-rated and under-the-radar rock albums of the 70s.
It’s hard to make a call between the two albums.
Drive On probably edges it in consistency but Shouting & Pointing contains Mott's finest musical moments, such as the highly-charged title track.

Shouting and Pointing - from Shouting & Pointing (1976)
Drive On varied between in-your-face rock songs and the melodic pop rock and roll of tunes such as ‘Stiff Upper Lip,' which musically, lyrically and title-wise only a British rock and roll band could have come up with.
The album also featured the the wonderful ‘Monte Carlo,’ a catchy little number that in a different era would have been a great soundtrack for the classic British "cops and robbers" comedies of the 1950s.

Mott also delivered some great rock ballads, including 'I’ll Tell You Something' and 'Here We Are,' but the pick of the balladeering bunch is ‘Career (No Such Thing as Rock and Roll)’ from Shouting & Pointing.

Shouting & Pointing also contained little gems such as the acoustic sing-along number 'See You Again,' which borders on country rock, and the ridiculously infectious honky tonk rock of 'Too Short Arms (I Don't Care).'

But with Shouting & Pointing a non-charter the writing was on the wall; Nigel Benjamin left later in 1976 and was replaced by John Fiddler.
The band, with Fiddler, became the British Lions, but they had even less success than Mott during their short performing and recording life.

First, Mott’s material received a deserved re-release via Wounded Bird Records, who re-issued both albums in CD some ten years after the unheralded CD issues of the late 90s.

Then, in October 2009, the original members of Mott the Hoople got together for a select number of highly successful reunion shows, with the 70 year old Ian Hunter out front to Roll Away the Stone and the years.

Joe Elliott, Def Leppard’s front man and a huge Mott the Hoople fan, put together the Down ‘n’ Outz to open for Hoople on the last of their London reunion shows.
Such was their own success that in 2010 Elliott recorded an album with the Down ‘n’ Outz featuring tracks by Ian Hunter, the British Lions and Mott – including 'By Tonight.'

It's nice to think that when Mr Elliot declared "And now take notice," many people did, some three and a half decades after not enough had for Mott to make a career out of it.

With thanks to Nigel Benjamin for additional information.

Audio tracks provided to accompany the above article and to promote the work of the artist/s.
No infringement of copyright is intended.