​The Journey That Time Forgot 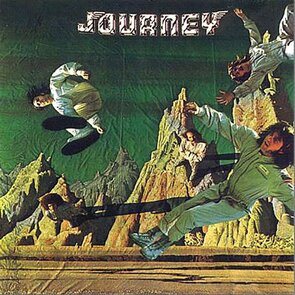 ​A significant musical journey began in 1975 with the release of an eponymous debut album.
The band responsible for the album would go on to become a household name in melodic rock and a feature of the 80s Billboard charts and arena shows.

But, unlike the more common occurrence these days where we have countless remastered or re-released versions of early albums by classic bands, there was to be no updated reissue for that debut album in 2010, thirty-five years on from its original appearance.

Nor had there been any special treatment for Journey in 2005 when the album celebrated its 30th birthday, even though songs from the album featured in Journey set lists during the Generations 30th Anniversary tour.

Sadly, those early tunes were not well received on the tour and had been met by most American concert going fans with extreme apathy, confusion or even complete ignorance of the material.
The early fusion songs were long gone from the set by the time the Generations tour got to Europe.

That's a shame, but maybe not a surprise when you consider Journey’s greatest musical successes (and the line-ups that achieved those successes) were far removed from the Journey that time forgot…

When Journey was released it showcased the precocious talents of guitarist Neal Schon, who had already played live alongside Eric Clapton and had been part of the Santana band for two years.
Manager Herbie Herbert hand-picked the musicians he wanted for his post-Santana management project and ex-Santana musos Schon and vocalist/ keyboardist Gregg Rolie were major components of the Journey that began in 1973.

The songs featured on Journey were honed on stage and in studio rehearsals throughout 1973 and 1974, but by the time recordings took place for the album Prairie Prince had jumped ship permanently to The Tubes.
Aynsley Dunbar replaced Prairie Prince behind the kit and was a great fit; technically proficient, Dunbar was more progressive than mainstream in his percussive musicality.
He became the final piece of the jigsaw in Journey’s original, prog-fusion period.

Journey was released in April 1975 but didn’t set the charts alight; it had estimated sales of around 100,000 in its first year.
It was however a critical success and featured some blistering six-string work from Neal Schon.
But sales should never be taken as a measure of quality and Journey’s debut album is so much more than just a footnote in the discography of the band.

The seven tracks on Journey served up a feast of fusion delights, with opening number ‘Of a Lifetime’ setting the musical tone.
Beginning with a soft intro featuring a Gregg Rolie vocal and Neal Schon melody line, the introduction lulls the listener into a false sense of security as the song builds to a heavy rock chorus before stepping up the tempo for a Schon solo run backed by synth remarks from Rolie.
The song finishes with a heavier version of the melody line that opened the song.

The more mainstream musicality of Journey could be found on songs such as ‘In the Morning Day’ and ‘To Play Some Music.’
‘In the Morning Day’ starts innocently enough with an almost balladeering feel, Gregg Rolie singing over a piano and organ backing, before the song kicks into gear featuring great Hammond organ runs from Rolie and a relatively short but blistering Neal Schon solo.
‘To Play Some Music’ opened side two in old record vinyl terms and was Journey’s statement of intent.
It's a great little rock number, with a self-explanatory title.

Adding further contrast is ‘In My Lonely Feeling/ Conversations,’ which starts as a heavy blues before the song segues to a slowly building instrumental section written by Ross Valory, who plays piano on the track.
(The melodic theme of ‘Conversations’ would be revisited and orchestrated to form part of an instrumental piece for Journey’s Dream after Dream soundtrack album five years later).

Album closer ‘Mystery Mountain’ cranks up the fusion vibe over a standard rock tempo.
Gregg Rolie emphatically delivers the volcanic lyrics while George Tickner weighs in with big, chunky guitar chords; Neal Schon and Aynsley Dunbar then drive the latter half of the song to its fade-out finish.

The other two numbers that feature, 'Kohoutek' and 'Topaz,' are the pick of the Journey bunch; both are prog-fusion instrumental classics (they were also highlights of early Journey shows).

‘Kohoutek,’ like ‘Of a Lifetime,’ starts quietly before stepping up both in power and tempo; at its core is the duelling instrumentation of a seriously fret burning Neal Schon and fast fingered synth-runs of Gregg Rolie.
Ross Valory and George Tickner hold down the main riff of the song while Aynsley Dunbar throws in a few fills and chops of his own before the song returns to its opening remarks.
‘Kohoutek’ was still a feature of Journey shows in 1980, well after the band's transformation to exponents of quality melodic rock.

‘Topaz,’ the other instrumental on Journey, beats out ‘Kohoutek’ as not just the best instrumental on the album, but also as the best track on the album.
It's also one of the most creative songs Journey ever recorded or performed.
Another song starting innocently enough with an atmospheric build up and almost eastern feel, 'Topaz' shifts to a rock shuffle (and pseudo-funky chords and rhythm from George Tickner) before unbridled lead work from Neal Schon kicks in over Gregg Rolie's Hammond washes.
Aynsley Dunbar again has his moments with big, beefy fills while Ross Valory spreads some rippling and funky bass lines around when the song hits its highest gear, before the downtempo fade-out.
​'Topaz' was written by George Tickner and indeed Journey's 'other' guitarist deserves special mention...

George Tickner was the foil to Neal Schon’s rapier like six-string work but he brought so much more to Journey – he knew more chords than most other guitarists out there and was a superb arranger and songwriter.
The usual comment attributed to George Tickner’s departure – that he didn’t like touring and left to pursue medical studies – is correct, but it’s only half the story.

George Tickner was throwing such clever and sometimes complex chord shapes around there were times Neal Schon didn’t know when or where to come down after his solos.
With Neal Schon being such a talent and huge part of the sound it’s perhaps no surprise there was sometimes a clash when Schon met another creative force bringing different six-string shapes to the table.

In Neal Schon’s defence however it can be argued, in hindsight, George Ticker was perhaps the fifth wheel.
With such a solid rhythm section in Ross Valory and Aynsley Dunbar, along with Gregg Rolie’s ability to put a keyboard layer behind Schon’s solos or match/ duel with those solos, Tickner became redundant.

Be that as it may, the part George Tickner played in the sound of that original Journey should not be forgotten or underestimated; he may also have been the best songwriter/ arranger of the band in that fusion era. (Tickner co-writing credits appeared on the two similarly fusion based albums that followed the debut).

And as regards the talents of Neal Schon?
The renowned guitarist will always be known, first and foremost, for six-string work such as the beautifully simple, melody line solo on ‘Who’s Crying Now’ and other outstanding melodic deliveries on later Journeys.
Yet the fact remains that while Neal Schon's most noted solos are associated with the post-fusion Journey era some of his best, unfettered works are in the grooves of albums such as Journey.

As just about every rock fan knows, by the late 70s it was a very different Journey; one that became a chart topping, melodically rocking success fronted by one of the greatest ever rock tenor voices.

But where the Journey started should not be forgotten.

Journey is one of the best rock-fusion albums of the era, standing shoulder to shoulder (in strength of songwriting, arrangement and musicianship) with records by the likes of British fusion band Colosseum II, who featured such luminaries as drummer Jon Hiseman, keyboardist Don Airey and a guitarist by the name of Gary Moore.