Putting the ART in Artist...
Muirsical Conversation with Steven Lindsay 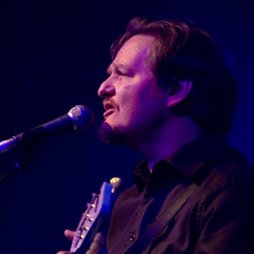 In the span of around half-a-dozen years, from the early to late eighties, a host of Scottish and Scottish-based bands launched moderately to highly successful careers, primarily in the rock and pop genres.

Acts that formed part of what became known as the "Jock Rock" movement included Lloyd Cole and The Commotions, Big Country, Love and Money, Hue and Cry, Deacon Blue, Texas, Del Amitri and The Proclaimers.

One of the most musically notable band’s of that era were The Big Dish, but sadly they were also notable for never achieving the commercial or chart success the songs penned by songwriter and Dish front man Steven Lindsay deserved.

But in 2012, some twenty-one years after disbanding, The Big Dish played two sell out reunion shows, proving great bands and great songs are appreciated and remembered beyond specific eras or particular musical genres.

And Steven Lindsay’s talents don’t start and end with his songwriting skills or abilities as a music artist; he is also a very talented artist with brush in hand.
If you think he’s a good songwriter, you should check out some of his paintings.

Steven put his brush down for a few minutes to talk to FabricationsHQ about The Big Dish, then and now…

Ross Muir: Thanks for taking time out to talk to FabricationsHQ, Steven.
How’s life treating Mr Lindsay these days?

Steven Lindsay: Good, thanks. Can’t complain. Lately I've been very busy painting towards two exhibitions, so my mind struggles to focus on anything else at times like this!

RM: You have a couple of exhibitions coming up?

SL: I've actually got exhibitions coming up in Aberdeen, Bristol and Stockholm.

RM: Great stuff. Earlier this year you switched artistic roles when The Big Dish played two reunion shows, including a headline slot at the Darvel Music Festival. What led you to Darvel?

SL: I heard it was a really well organised and worthwhile event, which it proved to be.

RM: It must have been gratifying to hear and see a festival crowd acknowledge songs such as ‘Swimmer’ and ‘Slide’ so fondly...

SL: It’s lovely to hear people enjoying and recognising the old songs. And they seemed to stand the test of time…
RM: The Big Dish also played to a full house at the ABC in Glasgow in January, some twenty-one years after the band’s last hurrah. Did you expect the gig to be such a hot ticket?

SL: I was surprised and flattered that the tickets seemed so popular. We must have done something right! I think my decision to end the band when we did has added to the kudos. We could have continued putting out albums on smaller labels, but I felt it had run its time.

RM: What shaped the decision to reform the band for those two reunion gigs?

SL: It had been suggested before, but when I got a call offering a specific gig on a specific date it seemed to force my hand somewhat. And the more I thought about it the more I liked the idea of playing the songs with the band again.

RM: Other than drummer Ross McFarlane, The Big Dish 2012 features musicians who played a major part in the band’s initial history. How did you get the specific musicians involved?

SL: [guitarist] Brian McFie was a given, Raymond Docherty too since he was the bass player in the band for the longest. Ross had played on my solo material and being such a great drummer seemed the obvious choice. Allan Dumbreck [keyboards] had approached me previously about reforming so his drive and enthusiasm plus his time in the band made him the guy.
I didn’t give Craig Armstrong [later Dish keyboard player, noted composer and film scorer] much thought as he’s normally so busy and was never that keen on playing live, like myself. And although he had a big input in the band at one stage I didn’t think he would mind not being involved.
Oddly enough, we did bump into Craig the day we first rehearsed, which was funny, as we pointed out to him that he had caught us in the act of reforming without him!  But I don't think we could have picked a better line up. Everyone worked really hard and we got on great.

RM: Going back to the original Dish period… the three albums released between 1986 and 1991 garnered solid, critical review but they didn’t get the sales their quality merited…

SL: No one is owed a living, it was what it was. I don’t think we concentrated on the commercial selling side of things enough if that’s what’s required. That and the lack of a little bit of luck, which is sometimes a help.

RM: Virgin dropped the band after the second album, Creeping Up on Jesus, wasn’t as successful as they clearly expected. Does that sort of label expectation put added pressure on you as a song writer?

SL: Yes, it’s not healthy when you’re trying to develop creatively. It meant I wrote to order a few times.

RM: That leads me to ask about your writing processes… how you compose, or what your influences and inspirations are.

SL: My influences start from glam rock and go through punk rock and new wave. This, mixed in with my dad’s crooner records and my older sister’s David Cassidy albums makes for a fair old mixing pot! I’ve always been drawn towards stylised music such as Roxy Music and Bowie, which meant I took many reference points from art. My Art School background helped in this too, I suppose.
I write about whatever is happening to me at a particular time, sometimes they come easy and other times not.

RM: The excellent Satellites would be the third and final Dish release and it would be thirteen years before you released your first solo album, Exit Music…

SL: I wrote for a couple of publishers in the period between Satellites and Exit Music but I soon lost interest in music and worked as an illustrator and Art Director in the design industry. When my marriage ended, I think that was the catalyst for me writing and releasing Exit Music and returning to music full time.

RM: There is a stripped back, piano and vocal core to most of the songs on Exit Music, along with some lovely string arrangements and/ or interesting treatments. Butterfly is a great example…
SL: I had been listening to a lot of trip-hop and Philip Glass, which I suppose gave birth to Butterfly. It’s about a dark obsession, trying to hold on to something.

RM: Exit Music sounds like a very personal yet very relaxed album... the freedom to create without having to worry about writing for commercial success.

SL: It was described as Art, which was enough for me. 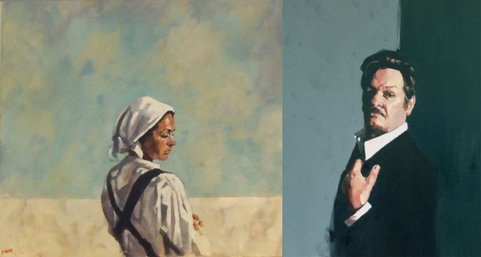 A Passing Thought and Self Portrait as a Dandy, two of Steven Lindsay's
quite striking, figurative oil-on-canvas works.

RM: I love the musical vibe of Kite, your second solo album, and lyrically the songs appear to be more observational than personal…

SL: Kite is more realised than Exit Music. It comes from slightly different place.
Not as inward and looks more at the surreal. A bit more futuristic… like Metropolis [a Kite song inspired by the Fritz Lang movie] My concept album!

RM: I’ve chosen to play Put Up the Flag from Kite; it has such a wonderful warmth and charm.

SL: Put Up the Flag is about happiness, growing older and into your own skin.
RM: From your last solo work to your first musical endeavours… how does a Lanarkshire lad get into rock ‘n’ roll?

SL: It looked like so much fun and a way to justify my massive record collection! People in Airdrie laughed at the thought of it. It was an unusual path to go down. They’re probably still laughing!

RM: And applauding with equal measure, I suspect. As The Big Dish were taking shape a number of other Scottish bands were making an impact in eighties melodic pop or rock...

SL: It was a good time for Scottish bands. The Postcard label and Orange Juice probably alerted the nation’s attention. Many of the other bands were more mainstream, but they were at least willing to “give it a go.”

RM: In closing, a question a lot of The Big Dish and Steven Lindsay fans are either asking or want me to ask: Are you considering further Dish dates or new material?

SL: Really don’t know. I don’t think the world needs another Dish album at present. The three albums were so well thought of it might just do them a dis-service to add another in this over-saturated time of free recorded music. Still might play live again… we’ll see…

RM: Well, I for one hope it’s not another twenty-five years until we see or hear from the band again…
RM: Steven, thanks for dropping by and best of luck with all your exhibitions.

Images of, and enquiries regarding, Steven Lindsay's paintings can be found on the Lime Tree Gallery website: http://www.limetreegallery.com/artist_display.asp?ArtistID=437

Audio tracks presented to accompany the above article and by kind permission of Steven Lindsay.
No infringement of copyright is intended.