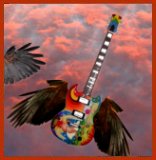 FabricationsHQ was originally created as a site to host freelance writer Ross Muir's eBooks, along with a small selection of his musical commentaries.

However the site soon took on a life of its own and Ross now finds himself in the position of music critic, with FabricationsHQ expanded to include reviews, feature articles and interviews/ artist promotion and occasional contributions from like-minded writers and musicians.

Information on the latest site additions can be found under Latest Articles (links).

Press Releases or larger, artist specific news pieces will appear near the top of the Main Menu, just under the Latest Articles tab.

For reference and information, any Menu or Sub-Menu tab that ends with either
... or >
has further Sub-Menu choices attached.

There are also non-musical sections including A Writer's Muirsings and A Man of Letters.

The eBooks by Muir, hosted on this site, are:

A Personal Journey
The original 2006 issue of the eBook tracked the career of the the rock band Journey from their formative years to the controversy surrounding many of their 2005-2006 live shows. The eBook has since had a number of updates and was made available in 2009 as A Personal Journey: Definitive Edition.

Ross Muir describes himself as "just your ordinary average guy... although Joe Walsh once sang the same, and look how he turned out...".

Ross wanted to get more seriously involved in music or even graphic or comic book artwork back in the day, but as regards the latter it was a problematic pursuit from the off as the West of Scotland isn't exactly a hotbed for that career or ability, although as he points out "Mark Millar managed just fine, thank you very much."

However Ross is also a freelance writer, independent music critic and reviewer; he also provides support promotion for many artists via on-line bios, press & epk releases, liner notes and other materials.

Away from those jobs he can be found sharing time and events with his wife Anne and although they prefer to take holidays or breaks exploring their own country these days, have taken many trips Stateside to visit friends in the San Francisco and Santa Cruz areas.
Anne used to live in California and Ross has an affinity and familiarity with the Bay Area that he "can't explain... so I don't try."

Trips across the pond also allow Ross to head for San Francisco 49er's games, which is part of another passion:
"I played American Football for four years and, strange though that may seem being deep in the heart of Scottish Links golf country, I hardly ever swung a club – Mark Twain was right, spoils a good walk.
But I used to catch a football in the Pro-Am level British American Football Leagues before the World League and subsequently NFL Europe got to the UK."

Other hobbies or pastimes include cycling, walking and light exercises work, although the latter is more necessity than relaxation to help keep lower back problems at bay (courtesy of that football thing mentioned earlier).

Ross will also happily discuss topics with like-minded individuals and those of opposite opinion in equal measure and reads, when time permits, on many a subject, from the serious to the not so serious:
"Anything from alternative views on pre-history and civilisations through to specific graphic novel/ Batman comic book works and, of course, 49ers roster news..."

As FabricationsHQ clearly confirms, Ross also enjoys writing: "primarily on music, but pretty much on any subject that interests me or that I feel needs addressed to keep the buggers 'honest'."

And having given up "proper singing" nearly forty years ago it's fair to say that thankfully, for the musical world, he writes a lot more than he sings.

The Author of the eBooks hosted on this site is not affiliated with any official source for the subjects of those eBooks.

This includes the band Journey, the musician (vocalist) Steve Perry and any related management, companies or organisations.

The audio files featured on FabricationsHQ do not have a download option and are streaming Flash Player audio. They are not unofficial or bootlegged material.
Such audio has been incorporated to accompany various articles, reviews or interviews and to promote the work of the related artist/s. No infringement of copyright is intended.

All works hosted on this site © FabricationsHQ and Ross Muir or by permission. All rights reserved.
No part or parts may be reprinted without express permission of the copyright holder.