A visit to the Big House: Home of a Ramblin' Band 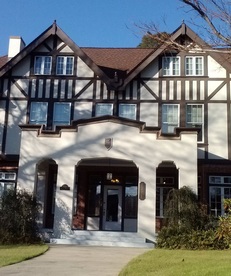 FabricationsHQ contributor (and creator of the site's "Flying Guitars" logos) Amanda Lee Campbell takes you to Macon, Georgia for a step through time and a walk beside Allman Brothers Band history...

The Big House, or Big House Museum, situated in Macon some 84 miles from Georgia’s state capital Atlanta, is home to the world's largest collection of Allman Brothers Band memorabilia.

The impressive three story Tudor building, built in 1900, was home to several members of the Allman Brothers Band and their families between January 1970 and January 1973 including original bassist Berry Oakley, his wife Linda and their daughter Brittany and Duane Allman, his wife Donna and their daughter Galadrielle.
Gregg Allman and Candy Oakley (Berry Oakley’s sister) also stayed here during the time they were a couple.

The first room visitors to The Big House Museum enter is the parlor; a painting of the At Fillmore East album cover by Macon artist Steve Penley graces the room along with a collection of concert posters.

Upon leaving the parlor you enter the Fillmore East room where the band rehearsed and jammed (the instrumental 'Hot 'Lanta' from At Fillmore East was written in this room). 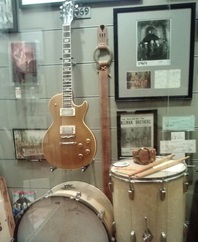 The first display case of the Fillmore East room features memorabilia from the founding members’ bands that pre-dated their association with the Allman Brothers Band; other display cases feature memorabilia from the early years of the band, from 1969-1972.
One of most notable pieces is "Layla," the Goldtop Les Paul guitar of Duane Allman; this guitar was used for the sessions with Eric Clapton (Derek and the Dominos).

Beyond the Fillmore room is found the old dining room; the display cases in this room feature items significant to the band from 1973 until their 2014 disbandment.
A gold record of the band’s #1 album Brothers and Sisters as presented to their roadie Joseph L. "Red Dog" Campbell is featured in the 1973 case, as is the Capricorn Records jacket Campbell wore.

The last section in the dining room is devoted to memorabilia from 1989 onwards.
Here can be found several guitars played by later members of the group including a Fender Jazz Bass played by Oteil Burbridge, a mustard coloured 1991 Gibson SG played by Warren Haynes and an impressive eighteen string Modulus bass played by Allen Woody.

Upon leaving the dining room you enter the living room, which is flooded with light from a large bay window (original member Dickey Betts wrote the song 'Blue Sky' in 1971, while looking out this window at the church across the street). 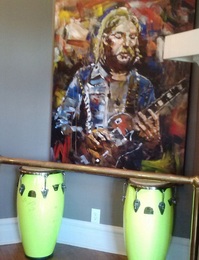 ﻿Dickey Betts' handwritten lyrics for the aforementioned 'Blue Sky' (written for his then fiancé and later wife Sandy) are also showcased in the living room, as are tracking sheets for 'Blue Sky,' 'Stand Back,' and 'Little Martha.'
On one of the living room walls is another Steve Penley painting, this one of Duane Allman.

A floor display case in the living room holds a Gibson SG played by Derek Trucks during his fifteen year tenure with the band; a wall case holds the blue velvet jacket Gregg Allman wore on the inside cover of his first solo album Laid Back, released in 1973.
Another floor case holds two early Allman Brothers Band amplifiers.

Located at the back of the house is the kitchen where Dickey Betts wrote 'Ramblin' Man' in 1971.
The kitchen features a table from the original H & H Restaurant owned by "Mama Louise" Hudson (the H & H was a hangout for the band members during the group’s early years).

Upstairs, the rooms have been restored to how they appeared when inhabited by the various band members and their families. 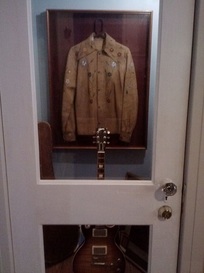 Duane Allman’s room is a sombre recreation of how his room would have looked circa 1971; his Allman Brothers Band Jacket hangs by the door while his statuette from the band’s 1995 induction into the Rock and Roll Hall of Fame sits to the left of the bed.
In the closet is a replica of Duane Allman’s 1959 Tobacco-burst Gibson Les Paul "Hot 'Lanta" guitar, along with his gold coloured shirt jacket with embroidered flowers.

The room and physicality of such items make it all-to-easy to conjure up images of Duane Allman leaving The Big House on his motorcycle on October 29th 1971, never to return from the accident that cost him his life. (Equally tragic was the loss of Berry Oakley one year later; Oakley died from injuries received in his own motorcycle accident on November 11th 1972, three blocks from where Duane Allman had his fatal crash). 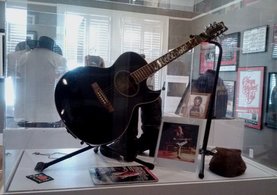 For those looking for a memento or two of their visit there’s a gift shop located behind the kitchen.
Here you can buy hats, t-shirts, recordings of the Allman Brothers Band and items that relate to The Big House Museum. 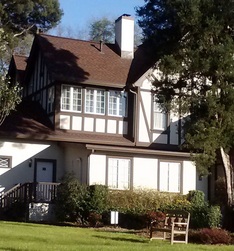 The Allman Brothers Band had many line-up changes; after a storied 45 year recording and touring career the final incarnation of the band was dissolved in 2014.