The Fool Guitar - The Fool Story 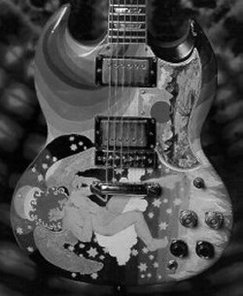 One of the most iconic instruments in rock history is the classic "Psychedelic" SG or "Fool Guitar," which started life as a standard Gibson SG model.

Written accounts of the Fool Guitar usually cite George Harrison as its original owner before he passed it to Eric Clapton.
It subsequently came into the possession of Todd Rundgren via Jackie Lomax, but it was pretty much taken for granted that the Beatles guitarist commissioned the custom paint job.

This writer did his own mini-history of the Fool SG in 2006 and although happy with the accuracy of my original article as regards the guitar's history, ownership and later sale to a private buyer, I too had presumed and accepted its Beatles beginnings.

In 2008 an article on The Fool guitar by Steven Rosen was featured in the Lifestyle section of the Gibson website and the journalist gave a very detailed account of the SG’s early life:
"Clapton’s Les Paul Standard had been stolen and replaced with this Gibson. Initially, everyone referred to it as a Les Paul SG. But they were wrong. Les Paul did not like the new SG design and asked that his name be taken off the model. By 1963, the guitars were known simply as SG Standards. There were no Les Paul SGs in 1964."

So, Rosen has it down as originally belonging to Eric Clapton, or at least implies that prior to Clapton's acquisition of the SG it was not owned by any other ‘name’ musician.
(as an aside, although there were indeed no Les Paul SGs in 1964 there has always been confusion in that regard as name plates affixed to some 1964 models still stated "Les Paul SG")

Another belief always taken for granted was that this particular guitar was a 1961 model, but Steven Rosen corrects that error in his article:
"A close examination of the body revealed a sixth screw hiding just under the lower left corner of the bridge pickup. Prior to 1964, only four screws were used. That was the giveaway. Clapton’s guitar, then, was a 1964 regular issue SG Standard."

Another unknown had been the original colour, but Rosen’s article was very detailed in that regard too:
"The original cherry finish was given a coat of white primer and then the oil-based paints were applied on top. Brushed-on enamels. Every inch of the instrument was painted including the back of the neck and even the fretboard."

That very paint job, along with the artists responsible, are the major reasons why it was so closely associated with George Harrison and originally believed to have been given the famous makeover under Harrison’s commission.

The 1960's psychedelic paint job was done by The Fool, a Dutch design team and sometimes band (recording one album); the noted members/ artists of The Fool were Simon Posthuma and Marijke Koger.
The pair had designed clothes and album covers for a number of artists in the 60s (including Procul Harum and The Move) but are primarily known for, and made their name with, the work they did for the Beatles.

Posthuma and Koger were responsible for a re-paint of John Lennon’s piano, one of his acoustic guitars and the striking mural, some three stories high, that featured on the exterior wall of the Beatles’ Apple Boutique in London.

They also provided the psychedelic paint job on one of George Harrison’s Stratocasters and that particular commission added to the confusion surrounding the Fool Guitar’s custom artwork, especially as Eric Clapton also hired the Dutch creative team around this time.

Clapton was so impressed with what The Fool created for the Beatles that early in 1967 he commissioned them to paint some instruments, including a Fender bass for Jack Bruce, just prior to the first Cream tour of the Unites States.
This was the same time-frame that saw Clapton using the 1964 SG Standard; he probably had that specific guitar painted as part of the Cream commission.
Steven Rosen is under no doubt this is exactly how, and when, the guitar got its iconic look.

However it's still possible the guitar originally belonged to George Harrison and one of the most famous guitar riffs of all time is thought to have been created and originally performed on a Gibson SG.
‘Daytripper,’ recorded by the Beatles in 1965 and starting with that classic Harrison riff, may well have been performed on not just any SG, but the soon to be Fool SG.

The Beatle guitarist may also have purchased the 1964 SG (owning and playing it for two or three years) before passing it on to his friend Eric Clapton in late 1966 or very early 1967, as a replacement for Clapton’s recently stolen Les Paul.

Whatever the guitar's origins, its iconic status truly started in those early months of 1967 as witnessed by many US fans, including one particular eighteen year old just starting out on his own musical career…

Todd Rundgren was part of the audience that saw Cream make their American debut on March 25th 1967 at the RKO Theater in New York.
He was reportedly as taken by Eric Clapton’s guitar as he was by the performance of the British power trio.

The Fool Guitar became Eric Clapton’s main weapon of choice for nearly two years until the band broke up in November 1968. It featured prominently on Cream’s classic album Disraeli Gears and was also used on the band's later records Wheels of Fire and Goodbye.
And its live outings certainly didn’t start and end with that 1967 US tour – it can be heard on both Live Cream and Live Cream Volume II, released a few years after the band's demise (it also traditionally featured on ‘Crossroads').

In December 1968 Eric Clapton loaned the guitar to singer Jackie Lomax, an Apple label mate of the Beatles. Clapton also played on the sessions for Lomax’s album Is This What You Want? produced by George Harrison.
A rumour from around this time claims Eric Clapton was actually going to return the guitar to George Harrison (which makes sense if Harrison was the original owner), only for Jackie Lomax to ask if he could borrow it (from Clapton or Harrison).

The facts of the loan arrangement have long since been forgotten but what is known is the guitar remained in Jackie Lomax’s possession for four years; publicity shots and photos from 1968 feature Lomax with the guitar (now sporting two non-original gold volume control knobs). 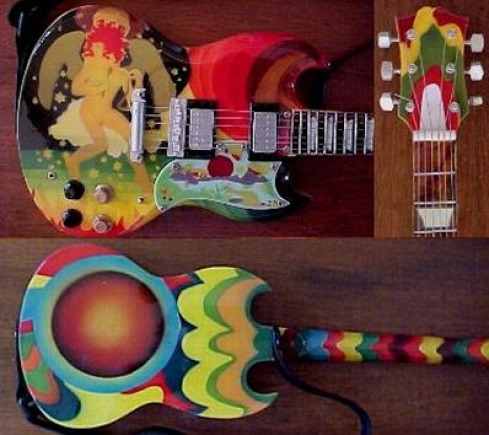 The famous "Psychedelic" SG or "Fool Guitar." These shots were taken while it
was in the possession of Jackie Lomax, or possibly immediately after Todd
Rundgren purchased it (note the two non-original gold control knobs).
When Rundgren became its owner he had the paint retouched, body sealed
and the guitar restored to more closely match its Clapton and Cream days.

In 1971 Jackie Lomax and Todd Rundgren met at a session in Woodstock, New York and became friends.
But Rundgren was astonished when he learned that Lomax owned the very same guitar that had made such an impression on him when he’d seen Eric Clapton perform with Cream back in 1967.

Todd Rundgren clearly mentioned that first sighting of the guitar to Jackie Lomax because a year later, in 1972, Lomax offered to sell him the guitar for $500.
Lomax’s only caveat was that he had the option to buy the guitar back, but nothing was ever heard again from Lomax in that regard (there are other versions of this story that say Rundgren got the guitar from a Pawn Shop, the guitar having been deposited there by Lomax).

When Todd Rundgren acquired the famous guitar it was in a bad state of repair and he had it restored.
The body was sealed, the headstock replaced and paint retouched.
A fixed stop tailpiece was also installed along with a Tune-o-matic bridge, strap locks and new knobs.
As far as can be ascertained, none of the original electronics, wiring or pickups were ever touched.
Rundgren also gave the guitar a name, ‘Sunny,’ as a nod towards the instrument’s appearance on the classic ‘Sunshine of Your Love’ from Disraeli Gears.

The Fool SG became a featured instrument in the live shows of Todd Rundgren and his band Utopia for some five years and is thought to have been used on a number of his studio recordings around this period. 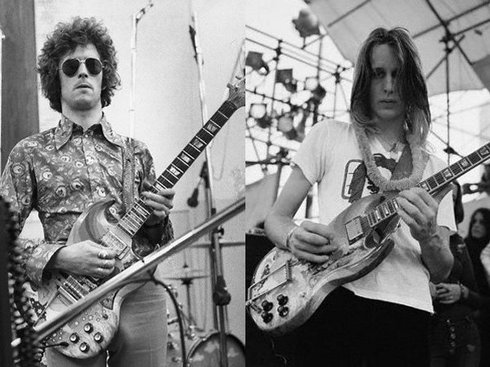 Eric Clapton, 1967, and Todd Rundgren, circa late 1973. Rundgren owned the
Fool Guitar for some twenty-eight years but the iconic and colourful Gibson SG
is still more closely associated with Eric Clapton and its Cream appearances.

Todd Rundgren retired the Fool Guitar from live appearances in the late 1970s but he still kept it around his studio; in late 1980 the famous guitar reappeared for Utopia’s Deface the Music tour and their spring 1981 shows.
At some point after those shows Rundgren again had the paint touched up and had the body re-sealed to prevent any more paint deterioration.

Although Todd Rundgren was seen performing with a Fool Guitar throughout the rest of the 80s it's believed he had a number of copies made; sightings were more than likely therefore to be a mix of original and copy.
Any outings for the original ceased in 1995 when it was officially retired and put in storage.

Five years later Todd Rundgren decided to auction the guitar through Sotheby's New York, with the guitar expected to go for hundreds of thousands of dollars (some estimates put the value at $500,000).
But, strange as it may seem, Sotheby’s managed to poorly advertise and promote the silent Internet auction and a private bid got the guitar for $150,000 (some accounts state $120,000).

After a twenty-eight year ownership Todd Rundgren finally parted with the famous instrument, but he was so aggrieved with Sotheby’s handling of the auction he allegedly sued Sotheby’s, reaching an undisclosed settlement.

And thus the Fool Guitar’s iconic life in rock and roll ended with the final facts unknown or undisclosed.
Much the same as the mystery behind its origins some three and a half decades prior.

But that isn’t quite the Fool story.

A few years after the anonymous buyer got his or her hands on the historic guitar, he or she reportedly resold it for an estimated $500,000.
The very price many conjectured it would have, and should have, gone for when Todd Rundgren sold it.

And that's the Fool story.