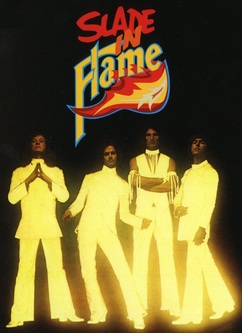 One of my most vivid memories of Slade is an appearance on Scottish Television’s Glen Michael’s Cartoon Cavalcade in May 1975.

There had been countless small screen appearances prior, including what was akin to a three year residency on BBC’s Top of The Pops (such was the band’s chart dominance in the early 70s), but the guest spot on Cartoon Cavalcade was destined to be one of Slade’s last major promotional interviews in Britain for five years.

Slade had just performed two nights at the Glasgow Apollo, part of the band’s 1975 UK spring tour, but a lot of the conversation centred around Slade in Flame.
The film, which had premièred in London earlier in the year, was a dark and gritty production charting the rise and fall of a fictional (but based on factual experience) rock band in the late 60s.

Seen by many at the time as career mistake, Slade in Flame is nonetheless rightly acclaimed as one of the best ever rock movies.

It was interesting to see Slade discuss the film on a programme such as Cartoon Cavalcade but they made for uncomfortable bedfellows; Glen Michael’s criticism of the swearing in the movie and the fact it might upset their younger fans was missing both the point of the film and the musical maturity of a band now writing some of their best ever material.

You could still Feel the Noize at the concerts but the movie (which did alienate and confuse some fans), along with the Flame studio album (featuring Slade’s finest ever song 'How Does it Feel?'), proved beyond any doubt Slade were now far, far away from the glamtastic, mizspelt hits that had made them superstars of the British music industry...
Following the 1975 UK spring tour Slade based themselves in the US for two years in a bid to crack the American market.
Their shows were generally well received – the band went down a storm in various locales including
St Louis and Philadelphia – but album and singles success was a much harder sell.

In 1976 Slade released Nobody’s Fools. The album, which included a couple of acoustic-based tracks and featured female backing singers on a number of the songs, is the band’s most interesting and musically diverse release.
Nobody’s Fools made the top 20 in the UK but had the band made more of a mark in the US the record, influenced by and geared for the American market, would have been a Billboard chart success.

As it was Nobody’s Fools did nothing stateside and in the spring of 1977, having invested a serious amount of their own money for little return, a battle weary and homesick Slade returned to Britain – and to a music scene they didn’t recognise.
​
Punk had appeared in all its safety pinned glory; a brash, angry and spikey-haired backlash to the discofied pop and over-indulgent rock that had reached saturation point.
There was musical Anarchy in the UK and Slade were a band out of time.

The once darlings of the music press couldn't buy an interview and many in the business thought they had split up; so did part of the once massive fan base.
There would be no cavalcade, cartoon or otherwise, for Slade’s homecoming.

From their earliest days together as The N' Betweens Noddy Holder, Jim Lea, Dave Hill, and Don Powell were a hard-working and tight quartet with bags of musical chemistry and a genuine on and off stage camaraderie.
They soon became a strong live attraction around the clubs and small concert halls, all of which provided the perfect apprenticeship for Holder who developed into one of the strongest voiced singers – and one of the greatest showmen – ever to grace a rock and roll stage.

Slade’s UK tour in the spring of 1977 was performed primarily at their old hunting grounds but the shows were not as well attended as they had been two years prior; subsequent 70s gigs would be a return to the clubs, universities and ballrooms of yesteryear.
For Noddy Holder however that was a ten-year trip back in time and an opportunity to strike up a rapport with the smaller audiences and have some ad-libbing fun.

Bassist and multi-instrumentalist Jim Lea, always the serious member of the quartet (and never the rock star), enjoyed the challenge of the changing times but it was a difficult period for flamboyant guitarist Dave Hill and drummer Don Powell, the percussive power behind Slade’s big-beat sound.
With no song writing royalties to fall back on (Holder and Lea were the song writing breadwinners), Hill and Powell struggled with the diminishing musical and financial returns.

But on stage the quartet’s energy and effort never wavered; from 1977 to 1980 Slade played some of their best shows in the face of musical apathy and anonymity.

And throughout it all the band retained their sense of humour.
They titled their 1977 studio album Whatever Happened to Slade and on the 1977 UK tour Holder introduced each show with "Hi, we’re Slade… remember us?" before launching in to a high-energy set of old hits and new material (to their credit Slade were never a band that played Greatest Hits sets, even when it would have served them better to do so).

Whatever Happened tour highlights included the high-powered rock and roll of 'One Eyed Jacks With Moustaches' and the lyrical tongue-twister 'Be.'
Noddy Holder and Jim Lea’s fast-paced, rapid fire vocal duet deliveries on the latter was worth the ticket price on its own...
The biggest tragedy of Slade’s forgotten years was the output of great material that went straight under the rock and pop radar.

Whatever Happened to Slade failed to chart but was the band at their heaviest and edgiest – punkified
energy in a hard rock conduit – while Slade Alive II (which also failed to chart) captured the band's "we'll show you" sleeves rolled up attitude and the intensity with which the songs were performed.
This reviewer and fan has no hesitation in rating Alive II as the best of Slade’s official live releases.

In 1979 Return to Base became Slade’s third non-charting album in a row.
The album, a mix of power-pop, ambient rock and fun, frenetic material deserved a fair hearing but it never stood a chance. Return to Base suffered the same fate as the previous two albums and the eight singles released between 1977 and 1979.

'Gypsy Roadhog' was banned by the BBC once they worked out the verse lyrics were drug references (so perhaps fittingly the single only sniffed at the charts); 'Burning in the Heat of Love' was also banned (due to suggestive lyrics); the fun rock ‘n’ roll covers medley 'My Baby Left Me / That’s All Right' (a tribute to the recently deceased Elvis Presley) couldn't break the top 30; the soccer-rock of 'Give Us a Goal' missed the net completely; 'Rock ‘n’ Roll Bolero' never made the charts dance.
And so it continued. 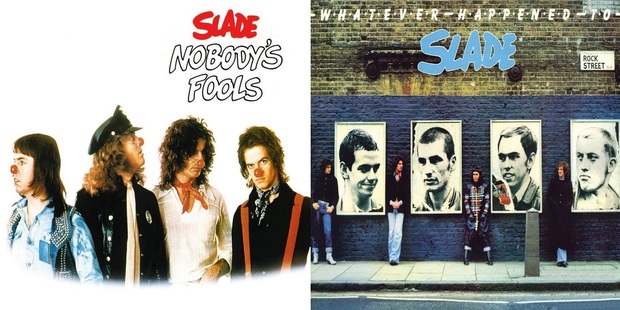 The musically diverse Nobody's Fools made #14 in the UK album charts but it deserved to be a US
Billboard hit. Whatever Happened to Slade, the band's heaviest and edgiest release, failed to chart.
In late 1979 Jim Lea, convinced the band were still producing good music but suffering because of a stigma attached to their name, formed The Dummies with brother Frank on drums and wife Louise on additional vocals.

The Dummies released three singles including the Slade song 'When the Lights Are Out.'
While there was never any chance of commercial success (no major distribution was in place) the singles did receive a lot of airplay.
The videos for 'Didn’t You Use to Use to Be You' (which made the BBC Radio One playlist) and 'Miles Out to Sea' (single B-side and another Slade number) also got some TV exposure.

Point proved. Radio and TV were treating the name Slade as if it was a musical leper.

By the summer of 1980 it was all but over for Slade.
The excellent Six of the Best EP, featuring the feisty power-pop of 'Night Starvation,' failed to get any airplay and Dave Hill had effectively left the band.
Hill was contemplating an alternative source of income by driving couples to their weddings in his Silver Cloud Yob 1 Rolls Royce. From SuperYob signature guitar owner to celebrity-for-hire-and-drive.

But when Ozzy Osbourne cancelled out of his 1980 Reading Festival appearance at short notice, an 11th hour opportunity arose for Slade to bow out in front of a major audience.
But, typical of Slade's fortunes over the previous three years, it wasn't that simple...

First of all Dave Hill was adamant the band would be booed off the stage and refused to play.
The late Chas Chandler, Slade’s manager, had to work extremely hard to get the guitarist to say yes.

Secondly, on the day of the gig, the band managed to lose both their parking and backstage passes.
They had to pay to park in the public car park, carry their own gear across to the backstage area and then suffer the ignominy of having to convince security of who they were.

Fortunately they were granted access and an inauspicious start to their day was followed by one of the greatest UK festival performances ever witnessed or heard.

From the rollicking opening brace of 'Dizzy Mama' (a single B-side very few of the audience would know) and 'My Baby Left Me' Slade had the attention of a large chunk of the Reading crowd.
By the third and fourth songs – the Slade classic 'Take Me Back ‘Ome' and future live staple 'When I'm Dancing I Ain't Fighting' – Rock Reverend Neville John Holder had tens of thousands in his Congregational choir.
Sixty minutes later, with the final notes of 'Born to Be Wild' still reverberating around Reading, the comeback was complete.

Some 65,000 rock fans Feel the Noize at Reading in 1980. A couple of months earlier Slade had
been performing to clubs of 600 and had all but disbanded when the Reading invitation came.
Slade’s supposed swansong set at Reading kick-started a second phase of early 80s success that included hit singles, chart albums and packed concert halls throughout the UK.

The second half of the 80s decade was not as kind to the band as the first half had been however.
Slade’s final two studio albums, 1985’s Rogues Gallery and 1987’s You Boyz Make Big Noize, were good but not great releases; both are guilty of Slade being influenced by the synthesized pop-rock of the time and not Slade being Slade.

After a hiatus of sorts Slade reconvened in 1991 with the Jim Lea compositions 'Radio Wall of Sound' and 'Universe.'
The quality of the singles, including the B-sides (penned by Dave Hill), hinted at what could have been a very strong album, but it wasn't to be – Noddy Holder stepped away from Slade after 25 years of service to the cause; Jim Lea retired from the band shortly thereafter.

Somewhat inevitably Dave Hill and Don Powell recruited other musicians and re-branded themselves as Slade II in 1992. Five years later they reverted to the name that had made them household names.

While Hill and Powell’s re-imagined version of the band has now played live for more than twenty years, eclipsing the original band’s fifteen year 1969 – 1984 run of performances, Slade’s rock and pop legacy will forever be their musical C.V. of the early 70s and their second wind of early 80s success.


Afterword:
I have extremely fond memories of Slade's 1975-1980 period but my most enduring Slade memory is connected to Slade's Christmas gig in Glasgow, December 1983; it was also the last time I saw the band perform.
I wore my own Slade designed T-shirt, based on the Nobody's Fools album cover, created with the best permanent, non-running, waterproof inks money could buy.
Post-gig, it took me two showers and a full hour of scrubbing to remove the coloured ink runs from my skin.

That's not a rock concert; that's a Slade concert.
Thanks for the indelible memories, Boyz.


Audio tracks presented to accompany the above article and to promote the work of the artist/s.
No infringement of copyright is intended.