This is Who They Are Now
The Damn Truth – Now Or Nowhere Record Release Experiment, Montreal, June 9th 2021 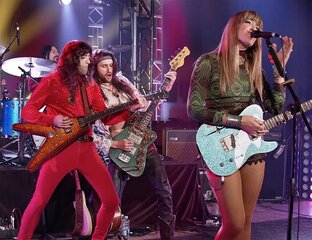 60s sheened Montreal quartet The Damn Truth are looking to ensure it’s third time the rock 'n' roll charm with studio album number three Now Or Nowhere, showcased in its entirety on an audience-less livestream performance that unequivocally proved the band can deliver as impressively live as they can in the studio.

Opening with a short pre-show intro of band-chat (covering the band’s first foray into the US and almost going broke while in Texas, to having Bob Rock enthuse about them to the degree that he produced the bulk of the new album – and would have produced it all, if not for that pesky Covid), the band then walked purposely on to stage, plugged in and powered through incendiary psychedelic rock and roll number 'This is Who We Are Now.'

The opening number did, indeed, show who they are now – a band (Lee-La Baum - lead vocals, guitar; Tom Shemer - guitars, vocals; Py Letterlier - bass, vocals; Dave Traina - drums) who were, not that long ago, one of the best kept musical secrets in and around Montreal but are now being talked about in the most positive of fashions on the other side of the pond in press, critical review, rock radio and social media music chat.

From rapid-fire snare drum and "woah-oh-yeah!" intro to Le-La Baum’s powerful Joplin/Slick vocality, psychedelia-tinged guitar and bubbling bass lines, 'This is Who We Are Now' is as vibrant and ear-catching a piece of rock and roll las you’re likely to hear (the band being dressed as if they had just stepped out of the psychedelic sixties only added to the late 60s/early 70s vibe of the song).

The eight other Now Or Nowhere songs then followed, each introduced by further short band-chat segments, where the group discussed the songs and their creation.
From the lyrical positivity of the raunchy 'Tomorrow' (featuring a Guns 'N Roses styled guitar intro and earworm chorus) and 'Only Love' (a slice of hard edged melodic Americana and album & performance highlight) to the hooky vibe that accompanied the riff 'n' raucous 'Full On You' (Le-La Baum also giving it the full on Joplin) and the extended rendition of impacting album closer 'Shot ‘Em' (a song so retro-authentic you’d swear it’s a long-lost Jefferson Airplane/Starship number) it was a salvo of sure-fire, live performance winners. 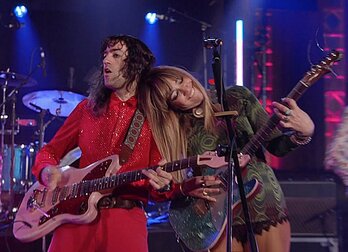 The damn truth be told however the other four Now Or Nowhere songs were equally impressive, from the big-beat chant blues of 'Lonely' and acoustic-electric folk charm of 'Everything Fades' (both bolstered by the addition of a couple of guest backing singers) to the mid-tempo and muscly blues-shimmering brace of 'The Fire' and 'Look Innocent,' which included Le-La Baum’s mid-song story of how she and Tom Shemer met (at a hippy festival, natch).
The latter pair of songs also produced Shemer and Baum’s respective six-string and vocal highlight moments of the set, although the rhythmic underpinning delivered by Messrs Letterlier and Traina throughout the show should not be overlooked.

While Now Or Nowhere is by far the band’s best and biggest offering to date, their previous studio albums have some strong musical statements of their own.
The best of those earlier album songs were showcased in the second half of the set – five from second album, the drums up front/ White Stripes skewed Devilish Folk, released in 2016, and two from 2012 debut album  Dear in the Headlights.

The rhythmic rock boogie of 'Pirates & Politicians' (an angrier, finger pointing affair that captures the theme of Devilish Folk) led off the selection, followed by the alt-rocking roll of 'Get With You' and the tempo-changing, psychedelic blues-rock of debut album number 'Too Late.'

The mid-tempo strains of 'Broken Blues' (featuring some powerful vocal deliveries from Le-La Baum) made for another Devilish little number, as did similarly weighted Dear in the Headlights track 'Kinda Awkward' (with particularly impassioned "you don’t know me at all!" cries from Baum at song’s end).

The seven-and-a-half minute electric folk/ blues hybrid 'Devilish Folk' (accompanied once again by the backing singers) then took centre stage (one of the band’s best songs, it’s another that nods to Jefferson Airplane/ early Starship) before the dark, slow swagger of 'Heart is Cold' closed out a seriously impressive 90 minute performance from
a seriously impressive band.

The Damn Truth have had significant support slots across the US and Europe in the company of the likes of Styx and ZZ Top, but the musical reality is the band have never really hit a resonant, rock 'n' roll chord with rock fans outside of their Maple Leaf home.

As Now Or Nowhere and this emphatic exclamation point of a livestream performance showed however, that’s about to change.

The Damn Truth will be Special Guests on King King’s February 2022 UK tour; the band's UK schedule that month also includes four headline dates of their own (see below). 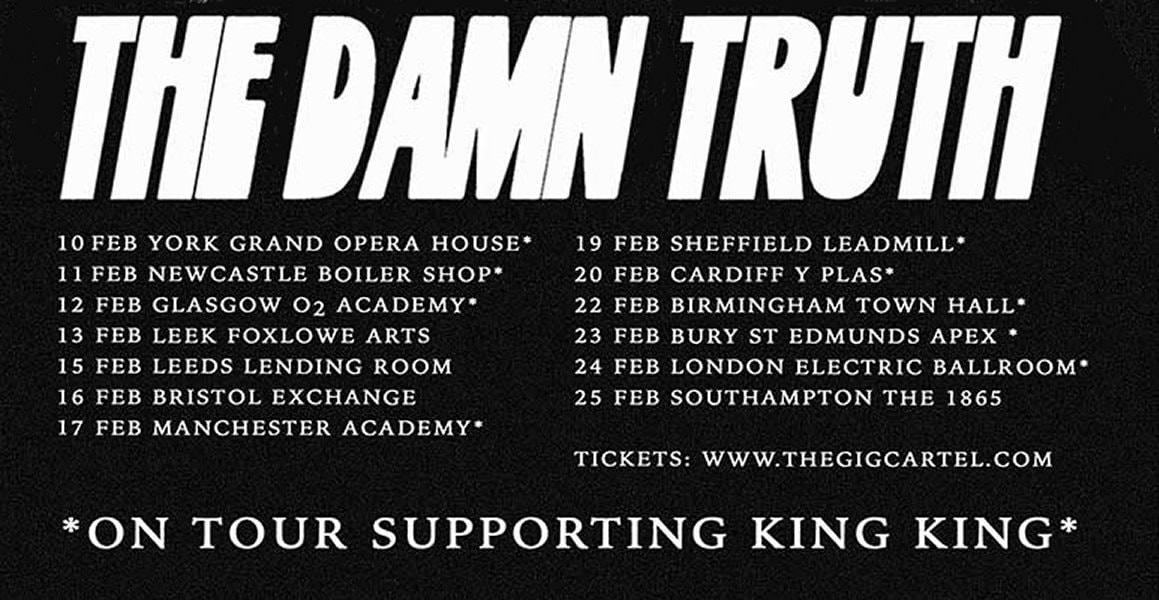