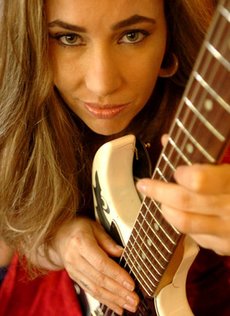 Singer, songwriter and guitarist Amy Schugar has the musical spice of life in not just her veins but her background.

Her Godmother was Amalia Mendoza, one of Mexico's most famous traditional singers (and a member of the Tres Señoras with Lola Beltrán and Lucha Villa) while her mother, Carla Lee, was also a singer (and a famous Bullfighter in the 1950s).

Amy Schugar developed her musical skills during the metal-scene days of the Sunset Strip in LA but it was a chance encounter in 2003 with uber-guitarist Michael Schenker that led to the collaborative album Under Construction.

Following the release of the album Amy toured/ guested with MSG and has since gone on to write and perform material in the rock, fusion and bluesy melodic genres, both vocal and instrumental, and is busier now than she has ever been.

FabricationsHQ chatted with the talented and accomplished singer and six-stringer to revisit Under Construction and discuss earlier and current projects.

Ross Muir: If we could start with the album and collaborative project you are most known for, Amy.
In 2003 you recorded Under Construction with Michael Schenker, but how did that association and recording come about?

Amy Schugar: Michael and I met at an Eric Johnson Concert - funnily enough, I saw Eric and visited with him again just in the last couple of weeks.
Michael came up to me when I was playing Eric's old Stratocaster; Michael liked what he heard in regards to my singing and playing. He then decided to see what I could do writing lyrics and melodies to some recordings and ideas he had. He and I worked very well together and the album came about from there.

RM: Under Construction is an interesting album but unfortunately it's only an eight track release.
Did scheduling and time restraints restrict recording time or was is it intentional to keep it short and sharp?

AS: Yes, there were a few different issues and we had a tour coming up; there was another song that I had been working on, but it never came out the way I had hoped for.
There is however a ninth, Bonus Track, on the Japan release called 'Even Though.'

RM: And that's where the original release was distributed?

AS: Yes, the official release was in Japan, on Avalon Records.

RM: Michael has worked with a large number of lead vocalists in his career but you are the first and, as far as I know, only female singer to have recorded with him. Did that put any added pressure on you?

AS: Yes sometimes it did, when it came to the touring part of it.
I noticed when I was introduced, and came out on stage to do cuts off the album, many of the guys in the front row had a look about them that did not seem kind and welcoming [laughs].
But after I got to playing and singing that all changed!

RM: Your voice and song writing gives Under Construction a whole different vibe – although there are some traditional rock guitar riff-led songs it’s a very melodic album with some great hooks.
Was that a conscious effort, to steer away from the riff-rock-by-numbers scenario?

AS: No, not on my part. For that album there was no conscious effort to do anything, only to sing and write what I felt. And Michael was kind enough to let me have free expression.
AS: It is interesting also, that I got Michael to sing on two or three of the songs on the album!
He sang back up on 'Back Through the Window' and I think that is a first; what a great chorus that song has.
'I Need This Feeling' he sang on also and 'I Need You.'
Take a close listen and you can distinctly hear his voice – and what a nice airy voice he has!

RM: I've given Under Construction a few plays over the years but I never realised it was Michael's voice on those numbers – but then as you say it was pretty much a first for him.
​And to flip that around, you didn't just sing lead vocal on the album though, you also played some guitar?

AS: Yes, that is correct.

RM: That's quite a compliment to your six-string talents because although there have been occasions when Michael Schenker hasn't been the only guitar player, his own lead abilities tend to take centre stage…

AS: Yeah, maybe you are correct. It was mighty generous of him to not only have me sing but to have me come out and showcase some lead playing as well.
I guess I never thought of it before, but maybe it was kind of unique! 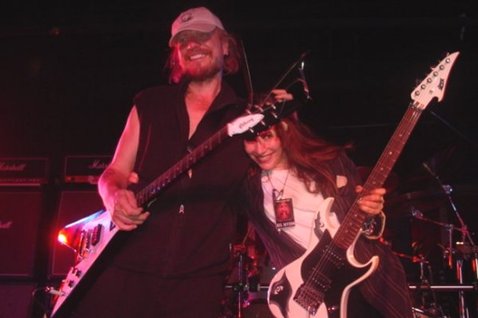 Schugar and Schenker "It was mighty generous of him to not only have me
sing but to have me come out and showcase some lead playing as well."

RM: Women in rock are usually known by voice first and instrument-of-choice second.
You however are not just a versatile rock vocalist but a very accomplished lead guitarist – who inspired you vocally and musically?

AS: Jeff Tate, David Coverdale, Aretha Franklin... there are so many great vocalists and I really love to sing. Eric Johnson is one of my all time favorites with his gentle voice and guitar skills; 'Dear Prudence' is so wonderful the way he performs it!
But when I was very young, I can honestly say Michael Schenker tunes were my all-time favourites for the guitar – however, the lyrical melody really makes the tunes.
When I first started out it was on acoustic guitar. I saw a couple of live bands and one in particular, Bad Axe. Man, the guitar player in that band, David Boerst, was amazing and is still; he is a real rock player and that got me going.
That was my first experience seeing a live bar band and I knew from there that I wanted to learn more rock music and get into solo playing more.
Then, as time went on, Joe Satriani and Steve Vai; I just absolutely love them.
They make the guitar the lead vocalist, kind of...

RM: I agree. The best exponents of their chosen instrument have the ability to give it voice or make it sing.
RM: Going back to your formative years and musical background, can you tell me a little about Sass and the Sunset Strip back in the LA "metal scene" days…

AS: Sass was the beginning for me in regards to fronting a band. Great band, but we all went in separate directions. And that's one thing that makes a band succeed – tenacity to stay together and stick to it.
When you see bands that have hit it big most, or many of them, have stayed together for years.
We are still friends, but we all live in separate places now.
Bands and musicians come and go, it is just the business, kind of – that is why being able to stand on your own is so important.

RM: But that band and that whole scene must have been a good way to hone your live voice and guitar skills.

AS: Well, those days were okay, but the last couple of years have actually been my best as regards progress.
I do occasional cover work, which has really opened some doors, and I have done tons of traveling to front not just one-and-a-half-hour shows but sometimes four hours in a night!
I feel I have grown much more in the last couple of years and I have had to really push the limits of endurance, physically and musically.
Touring in a big outfit with lots of roadies, sound people and guitar techs is a breeze compared to some of the stuff I have had to do! [laughs]. So I have definitely grown as a musician and a performer.

RM: And you are not just a singer and guitarist; you play keyboards too and I hear you are no slouch behind a drum kit...

AS: Where are you hearing this and from who! [laughs], because, yes, I do play those other instruments a bit but I never talk about it; only people close to me kind of know that! [laughs].
I have to say however that I really have focused on the vocals and the guitar because I do not think I could give one hundred percent to everything.
And focusing on my strengths rather than my weaknesses seems to be best; concentrating on my strong points, such as guitar, vocals and song writing.

RM: And with those strengths in vocal, guitar and song writing, can we expect a band album at some point in the future – or perhaps even a solo album?

AS: I would love to record another album but money and budget issues have really set me back; that has been the biggest road block.
I also want to be able to use the best musicians and best producer and do it one hundred percent as best I can, or not at all. I need a good booking agent too; one I could trust to really get me out there more.

RM: And as regards the present?

AS: I am playing constantly and have learned so many other styles music and vocals by doing that.
I also occasionally help bands out if they need a singer or a player; I even had a call to play an acoustic bluegrass gig not long ago – I love bluegrass! That was a lot of fun and I am actually working more, now, on acoustic guitar. I love picking up an acoustic and singing; but I just love working around music!
I also need, and want, to be out playing some festivals but man, this economy is just so bad right now.

RM: Amy, thanks for chatting to FabricationsHQ and all the best in future musical endeavours.

AS: And I thank you, Ross, for taking the time out to talk; it really has been fun!

Under Construction is available from Amazon, iTunes and CDBaby.com

Featured audio tracks are presented to accompany the above article and to promote the work of the artist/s.
No infringement of copyright is intended