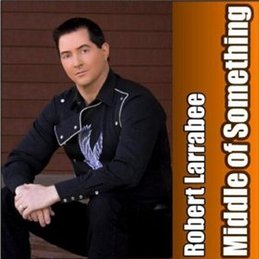 When singer songwriter Robert Larrabee came into the world at St Paul’s Hospital in Vancouver B.C. he was born with yellow jaundice, bronchitis, pneumonia, a sty in his right eye and spent a lot of time in an oxygen tent.

That’s worryingly close to an early end to your life, not the start of one.

But Robert overcame early adversity and left those difficulties behind to walk a country road that would pass through many towns before it brought him to a career in music.

Not that the final destination was a surprise – music has always been an important part of Robert’s life...

“It was my escape when I was small. I was the outsider, always the new kid at school – my mom was a waitress and we moved around a lot. We were never in the same town for more than a year.
“But we had a record player; one of those old ones that looked like a suitcase, when you opened it up there was a turntable inside!
“My mom played Slim Whitman, Red Sovine, Hank Williams and she would sometimes sing along.
“Then when I was ten my mom remarried and my step-dad had a lot of eight-track stuff, which introduced me to Marty Robbins, Burl Ives, Simon and Garfunkle, Neil Diamond, Tom Jones and Willie Nelson.
“Of course there was also the radio where great artists like Roy Orbison made an impact on me and that’s when I decided I wanted to sing.”

But it would be another ten years before Robert was literally pushed in to singing in public; his preparation for that as yet undiscovered country being to take himself away to his bedroom or somewhere safe and quiet to sing and act:
“I would get lost in a tune – I had an Elvis record and loved to sing ‘Suspicious Minds’ – and in my mind I was on stage in front of a big audience!”

Robert’s traumatic start to life and constant movement did make for a troubled childhood however and he left home at the age of fifteen.
Yet Robert still found peace within his ever-growing appreciation for country music and his love of singing was something that came naturally to the teenager.

At the behest of his then girlfriend and her family, Robert started singing in hotel bars and at afternoon jams sessions in Edmonton, Alberta, where he was living:
“I would sing for my girlfriend and her family and they were the ones who said ‘Robert, you have to do something with that voice’ and pushed me towards the afternoon jams.
“All of a sudden people would stop talking and listen; later they would come up and talk to me and tell me how much they enjoyed my voice.”

Those appearances led to two years of talent shows until one particular performance at The Rodeo Club saw the Fisher Music Agency approaching Robert to front a group.

Robert was soon cutting his touring teeth travelling across Canada as well as performing in tribute shows, including his own one-man act An Evening With The Legends.
The Legends show, a great mix of talent and humour, allowed Robert to make a name for himself as not just a singer but an entertainer.

But Robert is also a songwriter and it was inevitable he would eventually turn his attention to his life-long dream of being recognised as an original artist.

In 2012 Robert wrote a number of songs with noted Nashville song writer Jess Cates, who has written or co-written Billboard 100 hits for many artists. Robert also wrote three songs with Chad Cates, brother of Jess.
The material, collectively, became Middle of Something, Robert’s accomplished and polished country album released in 2013.

Robert and the Cates brothers’ ear for melody and a well-crafted tune is best exemplified by the title track, a great slice of melodic mid-tempo country that quickly made the playlists of a number of Canadian radio stations.

Entertaining audiences in Canada, the United States and Mexico.
Performances across the continents from London, England to Sydney, Australia.
An independently issued solo album that was radio playlisted in Canada and 26 countries across Europe within three months of release, with more songs to follow.

Robert Larrabee is most definitely in the Middle of Something.
And it’s something good.