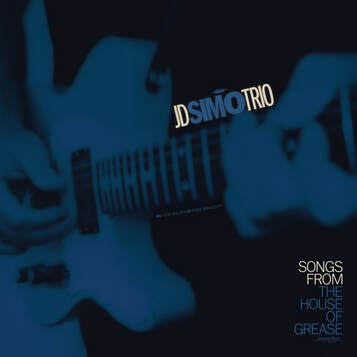 The phrase "expect the unexpected" is a perfect fit for Nashville based guitarist-singer-songwriter JD Simo – he never does the same album twice, not so much pushing as breaking his own musical boundaries (you might as well put the phrase 'music genre' in the bin).

Nor does JD Simo ever give the same live performance twice; free-form, semi-improvisational and where-the-mood-takes-him excursions alongside Adam Abrashoff (drums) and Todd Bolden (bass) are all part of the live music menu.

Such explorative traits are very much in evidence on Songs From The House Of Grease, a five song, 40 minute traverse through the musical mind of JD Simo, who was very much on his game, and in the musical moment, during these recordings ("This album is a live snapshot of me and the fellas playing some favourite tracks… it's honestly my best playing ever captured").

'Mortgage On My Soul,' which opens with piercing but polite note-bending cries from JD Simo’s guitar, takes a captivating rhythmical route across its seven minutes with Simo's drawl-styled vocal and sharp, guitar twangin' blues lines flitting across the groove laid down by Adam Abrashoff and Todd Bolden.
(The six-string punctuation atop Abrashoff’s Afro Beat is worth the admission fee on its own).

If there’s a touch of hypnotically vibe’d psychedelia threaded through the fabric of JD Simo’s interpretation of Mississippi Fred McDowell’s hill country number then there’s highly contrasting jazz-blues to be heard on 'Afro Blue.'
Such a styling is not too surprising given it’s an interpretational nod to John Coltrane’s version of Mongo Santamaria’s jazz standard; what is surprising however is how impressive the song remains across its eight minutes, JD Simo throwing innovative (and perhaps even improvised) guitar lines across another great rhythm, and performance, from Messrs Abrashoff & Bolden.

A new original, the instrumental 'Missy’s Strut,' sits centre of the album (where it does indeed strut its cheeky, funky and melodically infused stuff) before Blind Alfred Reed's old American folk staple 'How Can a Poor Man Stand Such Times and Live' gets the JD Simo Trio treatment.
Here the number eschews its original folk arrangement for a slower, six-minute blues-country interpretation, thus providing a great present-day-ills platform for its Great Depression lyric.

The album closes out on a thirteen minute take of JD Simo’s 'Higher Plane,' from 2020's self-titled solo album.
The heavy distortion meets psychedelic blues number starts as a high octane delivery of the original before expanding to an unfettered free-jazz second half, where all three players roam in a trippier 'Higher Plane' with musical and exploratory abandon.

As 'Higher Plane' and Songs From The House Of Grease emphatically reinforce, JD Simo is not one for knocking out hollow, heard-it-all before Delta stomp blues for lowest common denominator gain (that he is also highly respected among his peers was underlined when music supervisor David Cobb chose him to record all the guitar parts for the recent, critically acclaimed biopic Elvis).

And for that, JD, thank you very much. 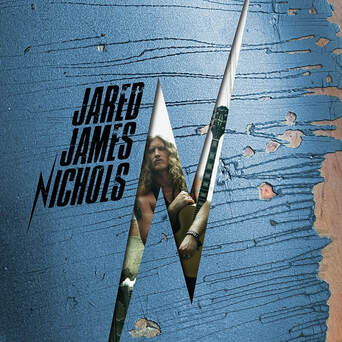 Larger than life singer-guitarist and Gibson neck-wringer Jared James Nichols (a towering 6’ 5” presence with the unfettered rawk attitude of Ted Nugent, back when Gonzo Ted was worth listening to – in both senses) has eponymously titled his latest, and third, full-length studio album.
And with good reason.

While 2015 debut studio album Old Glory & The Wild Revival was suitably impacting and 2018’s Black Magic reinforced his blues-raucous credentials, Jared James Nichols is exactly what JJN is all about, particularly in the live environment.

And that’s exactly where the album (produced, engineered & mixed by Eddie Spear and recorded live in the studio) takes its cue from, as JJN stated in pre-release press:
"I made a record to serve as the menu for the live show; there’s an element of excitement and danger.
The album is a day in the life with the ups and downs, but it musically rings true to who I am as an artist.
I’m not trying to be anybody but myself and play the music I love for today. I’m giving you loud ass guitars and no fucks given rock ‘n’ roll."

That in itself would do nicely as the review (thanks, Jared) but there are both blues-grungy pros and overly similar cons to this 12 track, forty-three minute offering from the engaging, Nashville based Gibson guitar ambassador.

'Down the Drain,' one of two pre-album singles, provides contrast with its more psychedelic verses, but it still retains that trademark JJN rawk chorus (here with a touch of grunge) and a wild ‘n’ wicked guitar solo.
Those unfettered six-string licks of JJN then introduce the slower (and other previous single) 'Hard Wired,' which evolved from a jam session with Tyler Bryant and Graham Whitford.
With its pseudo metal-blues style, 'Hard Wired' sits as one of the more interesting numbers on the album.

However as the album progresses from that opening quartet you realise, and hear, the problem – or, more accurately, that its greatest strength (that aforementioned unfettered-ness and rawk gusto) is also its weakness – songs such as the slightly punky 'Bad Roots,' staccato rock-blues of 'Good Time Girl,' the metal-riffed boogie of 'Hallelujah' and the grunge-rock-blues of 'Saint Or Fool' all, quite derivatively, come and go.

By change-up contrast however the early 70s vibe of 'Skin ‘n Bone,' heavier rhythmic shade applied to 'Long Way to Go,' the tempo-shifting psychedelic blues of 'Shadow Dancer' and lyrically poignant and moody 'Out Of Time' (a tribute to JJN’s late father) all make much more of an impact.

Would a 6 Track EP (or two such EPs, issued a few months apart) have made more of an impact? Perhaps.
But, whatever your take, this is definitively Jared James Nichols, musically raw and honest and never manufactured. 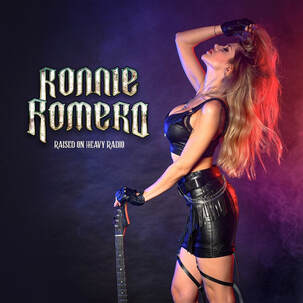 As can be gleaned from the title of the new album from melodic/heavy rock & metal vocalist Ronnie Romero (Lords of Black, The Ferrymen, Sunstorm, Rainbow, Michael Schenker Group), Raised On Heavy Radio is the heavier companion piece to Romero’s 2022 covers album Raised On Radio.

Ronnie Romero’s love of all things Ritchie Blackmore is highlighted by opening number 'The Battle Rages On' (a faithful rendition of Purple’s 1993 album title track, with Messrs Rubio & Del Vecchio making a good fist of the respective Blackmore & Lord parts) and the fast-paced, power down Rainbow classic 'Light in the Dark.'
The latter allows Romero to give it the full (if grittier voiced) Dio while Andy C keeps the powerful beat on point (a nod here too for Del Vecchio and Rubio’s respective and unfettered solos).

Manowar’s riff-driven, shouty chorus number 'Metal Daze' (with twiddly-shred solo by guest six-stringer Alfredo Alonso) allows Ronnie Romero to lift from his trademark gritty tenor tones to some screaming highs a la Eric Adams, before the chugging riff and incessant beat of Judas Priest’s 'Turbo Lover' (featuring a guitar solo from Nozomu Wakai) gets an airing.
Given the song’s one dimensionality (both musically and vocally) there’s a good argument that a different Priest pick would have had more impact, compounded by the fact an 'Alternate Solo' version of the song appears as a Digital album bonus track.

'Hallowed Be Thy Name' is another strange choice given it’s hard to beat the sheer power and prog-metal impact of the Maiden original (and the Bruce Dickinson vocal) but as a faithful homage, sans the gravitas, it works well enough.

'Fast as a Shark' is up to Accept-able metal speed, which is contrasted by following number 'No More Tears.'
Ozzy Osbourne’s atmospheric and keyboard embellished AOR metal classic (here featuring some great six-string work from Gus G.) is the slowest and moodiest number on the album – as such, when taken in tandem with Black Sabbath’s brooding-metal number 'The Shining' (featuring guitarist Chris Caffery and a great vocal from Ronnie Romero) they work well as mid-album changes of pace.

Metallica’s ever-shifting riffage-fest classic 'Four Horsemen,' with Ronnie Romero, Jose Rubio, Javi Garcia and Andy C giving it their vocal and instrumentation all, is a fairly impressive and purposeful way to close out the album.

Ronnie Romero is no stranger to putting voice to classic rock and metal covers, as showcased on his two Raised On… albums; both collections certainly have their rock and metal moments, but the singing-someone-else’s-songs irony Is they only increase the impatience for the anticipated all-new material solo album from one of the more noteworthy (in both senses) voices in 21st century rock.

Raised On Heavy Radio is released on Frontiers Records on January 27th.