The Mentulls – Recipe For Change 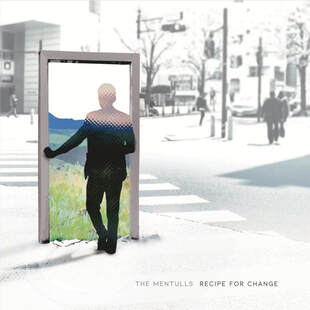 It’s not often an album is so accurately described by its title, both in album concept and the fact Recipe For Change offers up seriously tasty tracks amidst highly individualistic musical flavours.

But that’s the facts of the musical matter with the third album from The Mentulls (an adventurous sounding band who mix progressive tendencies with rock, blues and pop sensibilities), based around the talents of brothers Andrew (guitars, additional synths) and Jamie Pipe (keyboards), and now joined by vocalist and multi-instrumentalist David Neil Crabtree.

Crabtree, a contemporary singer-songwriter solo artist (and co-writer of four of the nine tracks; four others were co-written with respected songwriter John P Taylor) is certainly a vital vocal ingredient to the impressive sound and scope of the album, but there are other important musical and sonic sprinkles.
Not only is noted drummer Wayne Proctor behind the kit for Recipe For Change, he co-produced with Andrew Pipe and mixed & mastered the album (part of his equally noted House of Tone audio credentials).
British blues rock notable Oli Brown (RavenEye) also added backing vocals on the album.

The results of all those ingredients are a pretty damn tasty offering, musically and sonically.

For the former the band have not been afraid to accentuate their pop stylings, here influenced by the likes of Toto at their AOR best and, more noticeably, the Dukedom of Genesis (for many, the band’s crossover prog/ pop peak) led by the soft and engaging voice of David Neil Crabtree.

All of which is heard to fine effect on Genesis-esque opener 'Easy To Walk Away,' a relatively simple but highly impacting rhythmic pop number built on a playful groove and little synth remarks.
Lyrically, 'Easy To Walk Away' heralds in the album’s concept; that of a person who is yearning for country air and simpler pleasures having been worn down by city life and its inherent pressures ("You say you’re turning away, can’t face another day").
The far rockier title track, with prominent synth flourishes and sparingly used but perfectly placed vocal harmonies, reinforces the time-for-a-change lyricism before the more delicate and delightful (and again Genesis-y) 'Opened My Eyes' offers up reflection and the path ahead for the character of the story
("I'm stepping off of the concrete... the future I see is no longer here").

And so the travels toward a less stressful life continue, through superbly well-crafted, progressively arranged melodic pop and rock (only two tracks stretch over five minutes however, no song outstays its welcome).

From the celebratory soul-pop of 'Learning Through Living' and the up-tempo shimmer of 'Summit Fever' (which manages to conjure a fleeting image of Rush in the instrumental break) through uplifting ballad 'Saviour' (with melodically expressive guitar solo from Andrew Pipe at the song's up-tempo finale) and on to uplifting instrumental 'Find a Way to Journey’s End' (which, title fittingly, has more than a touch of Journey in their Raised On Radio era about it, along with some nifty drum work from Wayne Proctor) The Mentulls have never sounded, or played, better.

The light keyboard & vocal textures and rockier prog shade of penultimate number 'Smoke & Mirrors' makes for another winner before the melodically progressive, six-and-a-half minute 'Worlds Made of Sound' brings the album to an uplifting and musically affirming conclusion via time-changing shifts of emphasis, a strong sense of dynamics and even some swirling bluesy Hammond courtesy of Jamie Pipe, nodding to the band’s origins and album’s such as the critically acclaimed Reflections.

Sonically, Recipe For Change is as impressive as it is in its musicality and songcraft.
There was clearly a mandate to capture that big, open, early-to-mid 80s production sound of bands such as the aforementioned Toto and Genesis (as well as Gabriel circa So and Rush in their Moving Pictures era).
In that regard Andrew Pipe & Wayne Proctor have delivered big (sound) time, complemented by what might well be Proctor’s best mix to date.

Written over four years and recorded during the recent lockdowns, Recipe For Change has been more than worth that forty-eight month wait.
This is an outstanding album that should be embraced by anyone who loves crossover prog-pop, melodic rock and harmonious hooks a plenty.

Recipe For Change is out now on ProgBlues Music.
https://linktr.ee/thementulls