The Sweet - A Cut Above The Rest 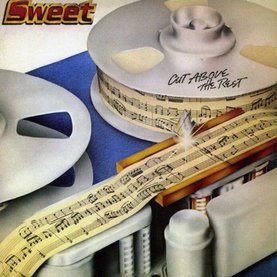 ​In November 2004, as part of the liner notes for the first of the remastered CD albums by British rock band The Sweet, guitarist Andy Scott wrote that the group went "...through many musical styles from pure pop through glam rock to progressive rock. I cannot think of another band achieving this and it makes me proud."

He should be proud of the musical legacy left by The Sweet, and he's got a point.
Once the classic line-up was established in 1971 every Sweet release (whether album or single) over the next decade had something to offer and they were indeed a band that dipped their toes in many musical waters.

Yet as regards Andy Scott's list of Sweet's musical styles it's actually a little inaccurate, or rather incomplete, which will be reviewed toward the end of this article.

The Sweet's first four pop-orientated singles didn't chart, but two significant moves in the latter half of 1970 meant a dramatic change in their fortunes was just around the corner.

First Andy Scott replaced Stewart, then the band got into bed with a new up and coming songwriting team, Nicky Chinn and Mike Chapman.
Those two moves meant The Sweet smell of success was soon in the air and on the airwaves.
Chinn and Chapman became a formidable songwriting duo in the 70s, going on to write hugely successful hard pop and glam rock hits for many artists including The Sweet, Mud, Suzie Quatro and Smokie.
But, ironically, Sweet's relationship with the songwriters that put them on the musical map also became their Achilles Heel.

Although charting with 'Funny Funny' in 1971, which started a run of fifteen hit singles in the UK over the next five years (including a #1 with 'Blockbuster'), the word on the street was The Sweet were just a singles and glam band, directed by the Chinnichap brand and not to be taken seriously.

In relation to their career in the early 70s the Chinnichap and Glam labels are accurate, but as regards the not to be taken seriously comment, and their ability as musicians, nothing could have been further from the truth.

While contemporaries such as Slade were taken seriously (writing their own material, known as a genuinely hard working rock band and a great live act as well as producing albums that were as impacting as the glam based singles), The Sweet were seen as just a singles act.
And, other than a mini-recovery in 1978 with their hit 'Love is Like Oxygen,' they were almost forgotten, or more accurately ignored, in their own country after that glam-tastic run circa 1972-74.

To be fair some of it was of their own making.
The band were tied to the Chinnichap team too long (they would eventually part during 1974) and they played on the glam image to such a degree (extravagant outfits, lipstick and effeminate posturing, particularly from Steve Priest) that they had a difficult time shaking that image off in the UK. 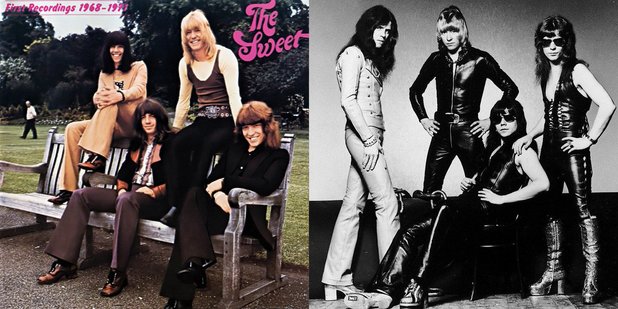 The Sweet 1971-1973: From Bubblegum Popsters to the Ballroom Blitzers of Glam Rock

Outside of the UK however they were highly successful throughout their career – Germany had always been a stronghold, as were parts of Scandinavia, and their music was well received on US rock radio.
There was also a huge fan-base in Japan.

And beyond the Chinn and Chapman singles there was some quality heavy rock songwriting and seriously solid musicianship to be heard on both the self-penned B-sides of those hit singles and their subsequent, rock-orientated studio albums.

For proof of the latter you need look no further than Sweet Fanny Adams.
That 1974 album is still, rightly, hailed as a hard rock tour-de-force that features heavy melodic rock, some glam rock and roll and guitar-orientated burners.
The Sweet were truly great musicians (Mick Tucker was a superb but under-rated drummer) and each individual could also sing and would take lead vocals.
Their two and three part backing vocals and four part harmonies were some of the finest by any rock band and clearly an influence on acts such as Queen and their own distinct vocal arrangements.

Indeed for all the negativity from some quarters they were a huge influence on many bands who followed, KISS and Def Leppard being two such notables.

They were also, for the most part, a great live act and Ritchie Blackmore appeared with the band on stage in Santa Monica in 1976 (performing 'All Right Now' in tribute to Paul Kossoff who had died the week before).

I state "for the most part" because once drugs took hold (which they would later openly but regretfully admit to) their performances were certainly less tight at times, especially in the vocal department.
And therein lies the greatest tragedy of The Sweet story...

I have written often of not treating musicians or artists as heroes or idols as they are no more or less than you and I, but as a young fan or early teenager you do tend to have a different perspective.

I was a fan of not just Brian Connolly the singer, but Brian Connolly the individual.
To this (then) young fan he was cool – I wanted to be like him, sing like him and wear the same t-shirts as him (as did many others).
The girl fans were taken by his looks as well as his voice and wanted to marry him, but they were also annoyed that he was blessed with a head of hair that no man should possess.

In 1974 Brian Connolly was beaten up after leaving a nightclub; the injuries sustained (he was kicked in the throat a number of times) unarguably played a part in the later and notable loss of vocal range.

But alcoholism was the singer's true downfall and unreliability, coupled with some embarrassing live performances, saw him dropped from the band in 1979.
Sadly, Brian Connolly's later solo career never amounted to anything of note, musically or vocally.
The Sweet however forged on ahead (initially in a slightly more progressive fashion) without their mercurial front man. ​​
A possible full reunion ended before it started in 1988 when it was evident Brian Connolly could not deliver consistently or strongly enough, as can be heard on the demos of 'Action' and 'Ballroom Blitz' recorded that year in Los Angeles.

Brian Connolly would go on to tour as, first, the New Sweet before re-branding as Brian Connolly's Sweet.
However although he would later down tools on the drinking the physical and vocal damage was done.

A shadow of his former self, Brian Connolly died in 1997 from liver failure and repeated heart attacks, due primarily to the damage caused by chronic alcoholism of the past.

The band continued post-Connolly for three years and three albums before calling it a day in 1981 due to diminishing returns.
Their last album, Identity Crisis, was not released until 1982 by Polydor and then only in Germany, still a stronghold to the end. 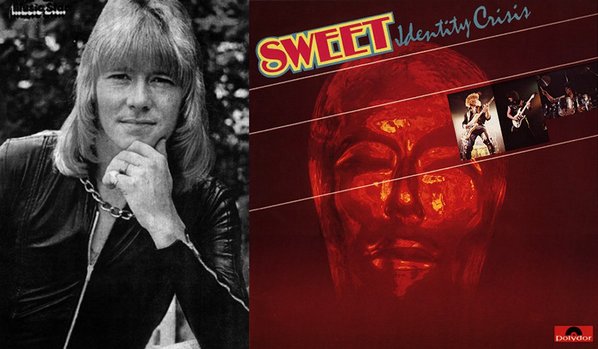 Lead vocalist Brian Connolly in healthier and happier days. The Sweet continued as a trio
post-Connolly for three years and three albums; Identity Crisis was their final hard rock hurrah.

As was to be expected, many versions or variations of The Sweet later formed, with Andy Scott's Sweet having the most longevity.

Formed in 1985 and still performing thirty-five years later, the group were originally a partially reformed Sweet, with the band also featuring Mick Tucker (until he left in 1991).
A number of musicians have worked, toured or recorded with Andy Scott's Sweet (as they became known after Tucker's departure) but there has been fairly stable line-ups in recent years.

In 2008 Steve Priest, having relocated to America in the 1980s, formed Steve Priest's Sweet; the band operated exclusively Stateside.
Frailer health in early 2020 restricted, but did not curtail, his playing and performances until, sadly, his own passing to illness in June that year.
​
Andy Scott's version of the much revered band (reverting to the name Sweet after Mick Tucker's death) continue to work the UK and European circuit very successfully.

The demand for, and love of playing, those great Sweet songs as Andy Scott and, up until his passing, Steve Priest, have done, cannot be underestimated – especially given the new generation/s of rock fans in the classic rock resurgence of the 21st century.

For others however The Sweet will always be that original decade covering the classic four-piece line-up and the post-Connolly trio. And the back catalogue legacy that incorporated so many styles of music, so solidly.

The Sweet 1974-1978: Heavy Rock with Harmonies to Melodic AOR Progressives.
At the top of this article I cited an inaccuracy in Andy Scott's summary of Sweet's musical diversity.
But that's only because he missed a couple.
The Sweet were also rock balladeers (from the the beautifully simple 'You're Not Wrong for Loving Me' to later pieces such as 'Laura Lee' and 'Lady of the Lake'), quality heavy rock exponents (Give Us a Wink, Off the Record) and melodic AOR merchants (Level Headed).

And they did them all pretty damn successfully, no matter what their UK sales charts and statistics may indicate.

But their association with the Chinn and Chapman songwriting partnership produced their greatest successes and together they created some of the finest glam rock ever written, recorded and performed ('Ballroom Blitz' and 'Hellraiser' are two excellent and definitive examples).

Yet those songs were not their finest musical moments together and Andy Scott has stated many times he believes 'The Six Teens' to be the best song ever written by Chinn and Chapman.
It's certainly the finest four minutes of The Sweet's career.
It's also fitting that one of their albums was entitled Cut Above the Rest.
Because, at one time, they truly were.


Article dedicated to the memory of Brian Francis Connolly, Michael Thomas Tucker and Stephen Norman Priest, who continue to "light the faded light."

YouTube clips presented to accompany the above article and to promote the work of the artist/s.
No infringement of copyright is intended.