It's a New Language, Old Bean 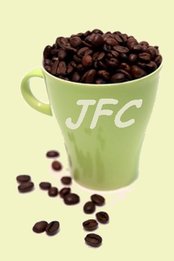 In August 2010 Lynne Rosenthal, a professor of literature, was thrown out of a branch of Starbucks in Manhattan.
This all related to her annoyance at being asked what she perceived to be unnecessary or ‘hard-sell’ questions after she had made it clear what she wanted (and this was in reference to a bagel, not any type of coffee).

"Linguistic fascism" may have been taking it a bit too far but it was a perfect example of what is happening with big name franchises as they reinvent the wheel. Or the coffee pot.
Rosenthal had previously had some run-ins with staff at this branch because of her refusal to use the Starbucks Bible of coffee jargon.
I tip my cafetiere to her for the stance.

Which brings me to the point of this particular Muirsing.

When did we arrive at the stage where chains such as Starbucks and Costa Coffee decided we all had to chant their Gospel to simply get a cup of coffee?
For six centuries it’s been coffee. Black coffee. Hot coffee. Hell, even cold coffee.
As time moves on tastes change or expand and coffee could be taken with a splash of milk (white coffee) or maybe even cream. No harm in that. Coffee with cream. No more, no less.
You may even want to throw a sweetener or a sugar lump or two in there.

But at some point, someone somewhere decided that we all had to learn a new language, even though the old one has served us all well since the Ethiopians discovered the coffee bean plant and the Arabic countries cultivated it, thinking "hello, we’re on to something here, now we just need to invent the pastry."

Starbucks have been selling coffee since 1971 but it was when the chain was sold to Il Gironale in 1987 the franchise started to venture outside of the United States.
By the 90s the global explosion and expansion was on and then the fun really started.
In recent years we’ve had Starbucks restaurants, 'Ready Brew' instant coffee, iced variations, pre-sweetened drinks, various flavoured coffees and the promotion and selling of books, film and music as part of your "Starbucks Experience."

Their coffee isn’t the worst in the world, nor would I expect it to be, but what I find amusing is how some of the Starbucks clientele are simply buying in to the lure of the brand where the name becomes more important than the product purchased.
The entertainment industry is little different.

But that’s the reinvented and re-imagined culture we live in so I don’t find it surprising – but I do have a problem with the language of this reinvention, much as Lynne Rosenthal did.

Coffee is being reinvented and they’ve done everything but rename it – there are a large number of coffee houses, coffee shops and restaurants that don’t actually carry the word "coffee" on their beverage menus, instead offering us an Americano, Espresso, Cappuccino, Latte, Mocha chino, Macchiato or other variations and creations.

My favourite example returns us to Starbucks and their Frappuccino coffee drink (there are also Frappuccino ice creams) in different flavours.
A friend of mine, who quite likes some of these concoctions but is also saddened and irritated by the unnecessary language and branding, beat me to the punch when he commented that a Coffee Frappuccino "isn’t a coffee drink, it’s just a flavoured milkshake with a fancy name."
Indeed.

Another favourite is the Skinny Harmless.
This genuine menu item is a decaffeinated coffee with low-fat milk.
Two things immediately come to mind.
First, why can’t the customer just ask for "a decaf coffee and do you have low fat?"
Secondly, assuming the first idea is blown out of the hot water (usually sitting in your cup before the shot of coffee) because it’s too technical to grasp, why not just call it a Totally Pointless?.

The Starbucks Experience: providing anything and everything you could ever want from your
coffee shop, unless you ask for a white coffee or even just a black coffee. Then all bets are off.

But if the barista (coffee maker) is confronted with a customer asking for just a coffee, perhaps a white coffee or even a black coffee? It doesn’t compute.
Not because the recipient of the request has the IQ of a coffee bean plant (some do though, as we’ll see later) but because the baristas' have been trained to chant the mantra and only know one script.
Any deviation throws them to such a degree that the customer is met with a blank stare.

Others, though, know how to handle that simple "just a coffee please" question and respond with a barrage of alternatives or additions thrown back at the customer.
This is known as 'upselling,' where the seller is making you suggestive to the idea of paying more for things you never asked for or never wanted.

The choices are to accept this hard sell and upgrade you purchase, remain unphased and ask for your original order, or get irritated and maybe even find it so infuriating that you politely remind the strange man or woman behind the counter speaking in tongues that you just want a coffee.
You might even add a colourful metaphor to the request...

A number of years ago a good friend of mine and I were shooting the breeze over the very nature of the coffee chain of events we were watching develop in front of our eyes (John and I had a black coffee and a white coffee, respectively, which had taken ten minutes of translation to obtain).
We decided, come the day we win, earn, or inherit the obscene amounts of money that we’re clearly entitled to, we will open a chain of our own, the brand name being JFC.
Just Coffee.

Ah, well spotted. That would be JC.
But, of course, those initials are already copyrighted by a specific individual with global recognition.
John Cleese.

So we added the F.
"Just For Coffee," I hear you ask?
Yeah, let’s go with that. Let’s say that’s exactly what the F stands for.

JFC options?
Black coffee (and there will be a decaf option), milk on the table and some sugar.
Cup or mug, no Spanish Inquisition of "tall, grande or venti, sir?" (Starbucks speak for small, medium or large).

We would even have our own friendly and efficient JFC barista boys and girls who would provide you with exactly what JFC stands for.
But if you even look like asking for a tall skinny latte mocha-choca gargle-blaster with just a hint of walnut sprinkles flecked over a cream-foamed top, we would not be responsible for our actions.
All part of the "JFC Experience."

And we have a ready made market, because for every Costa bloody fortune Coffee customer there are two regular Joe's that shun such branding chains.
They would rather enjoy a coffee in the company of good friends and like minded individuals in the comfort of their own homes or at the local JFC, where you don’t need to pay for your over-priced cup of Joe in installments.

I started this Muirsing on the subject of the new language and that’s how we’ll finish.
Allow me to present a couple of classic and absolutely genuine examples...

A few years ago John and I were, along with our better halves, traveling to the Isle of Arran by Ferry.
John and I decided to set the world to rights (again) over a coffee and headed for the coffee bar where John ordered.
One black coffee and one white coffee, thanks, nothing fancy, was the order.
The server, clearly reading our minds and having the same attitude towards the new-age language asked John, with a dead-pan delivery "do you want a latte, or do you just want to pour the milk in yourself?"
That’s a man that’s welcome at JFC anytime.

More recently I popped into my local Waterstones book store for a browse and to grab a coffee and a pastry, unaware that the café at the back of the shop had recently become a Costa operation.
The board behind the service counter and the table menu had the usual coffee options (by usual I mean there was nothing called coffee) except at the bottom of the list where I found, to my surprise, White Coffee.
Splendid I thought, a white coffee and lemon muffin it is.
Luckily (or unluckily) I mentioned to the youth behind the counter how nice it was to finally find a franchise selling and advertising a white coffee as there are very few left who understand the concept of a coffee with milk in it.
But as soon as it had left my lips I realised I was in trouble (the beep… beep… beep… flat line scrolling across his eyes was the giveaway).

"Coffee, white, with milk?" I suggested.
"That’s not what a white coffee is" came the confused reply.
"That’s what it says on your menu" says I.
"That’s not a coffee with milk."
"Really, what is it then?"
"That’s a Waterstones ‘White Coffee.’"
"Right, so that’s a coffee, with milk poured in."
"Naw, it’s a coffee with Waterstones own special hot spiced milk."
"Can’t you just pour me a coffee and pour cold milk in?"
"Naw."
"Why not?"
"We don’t have milk."
"You just said that that this coffee has hot milk…"
"Hot, aye, but we don’t have any milk to just put in to a coffee. We keep the
milk hot, like the coffee."
"You don’t have any cold milk in a fridge or in the cold drinks compartment?"
"Naw."
It’s enough to give a white coffee man the blues.

I could have left, but the lemon muffin had my name on it and I held up the milk white flag of surrender.
The coffee? Awful, but the muffin helped kill the taste.

My friend John had a bit of a run-in at a motorway service station which had a Costa Coffee shop.
John, as is his want (to make sure everyone is clear on what he asked for) is always very precise on the drink part of his order: "Just a Plain. Black. Coffee. Thanks."
The reply, after a pause as the wheels coffee-grinded into motion inside the barista's head:
"Do you want milk in your black coffee?"

John wrote to the manager (there were other complaints related to the store) and he included the observations that not only couldn’t he get a black coffee, his question had thrown the server such a wobbler that other parts of his order were taken incorrectly.

To our surprise, John received a reply.
Further to our surprise, the manager who responded apologised and openly admitted to flaws in the operation as regards coffee language, staff responses and having to operate under the Costa guidelines.
He went on to say that they sold a lot of Americano coffees, but admitted this was "just a fancy name for a regular black coffee."
Which begs the question why the hell isn’t it just called a black coffee, then?

I’ll leave the final comment to Iain, the flavoured milkshake friend I mentioned earlier.
Having heard I was writing a piece on the coffee subject, Iain suggested it won’t be long before many of us are walking in to Starbucks, Costa, Waterstones or the coffee house of your choice, producing a flask of coffee and a carton of milk from your pocket, sitting them on the counter and asking the barista for "just a cup, please, nothing in it."

The only problem with that idea is the reply will be "Certainly, sir. Tall, grande or venti?"