Tears for Fears – The Tipping Point 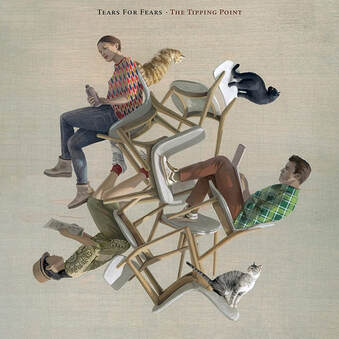 Tears for Fears are an unusual duo/ band in many respects.
For a start, in almost 40 years they have only released seven studio albums, including new album The Tipping Point.

It’s also interesting to recall that when Roland Orzabal and Curt Smith first arrived on the scene in the early 80s they were initially dismissed as another singles/ pop band (1983 debut album The Hurting, which received Platinum sales status in the UK two years later, delivered the hit singles 'Mad World,' 'Change' and 'Pale Shelter').

However with 1985’s Songs From the Big Chair and The Seeds of Love four years later, Messrs Orzabal and Smith, with an A-list of session musicians, were recognised as consummate and highly respected pop-soul songwriters, having shifted over 80 million albums and responsible for global hit singles such as 'Shout,' 'Everybody Wants to Rule the World' and 'Sowing the Seeds of Love.'

A couple of years later it all went south when Roland Orzabal and Curt Smith’s relationship became increasingly fractious; the former continued under the TFF moniker with Elemental (1993) and Raoul and the Kings of Spain (1995) but both were ostensibly Orzabal solo albums (albeit both were critically under-rated/ under-valued).

Fast forward to 2004 and Orzabal and Smith reunite for Everybody Loves a Happy Ending which, although having its moments, was met with an apathetic critical response.

Bearing all that in mind, this did not bode well for an album release eighteen years later, during which previous recording attempts (going back as far as 2013) ended up on the cutting room floor.
So, in the cold light of the Tears and Fears of the year 2022, what is the end result like?

Opener 'No Small Thing' builds from a single acoustic guitar part before layers are added, building towards the signature and lush orchestrated sound that was part of the revered TFF sonic of yesteryear.
The production, attention to detail in the arrangement (and obligatory hints of the Beatles) is immediately recognisable, with a lineage to the mega-successful The Seeds of Love.

It’s a very strong start, one that serves as the introduction to the title track where, again, there are top-level production values along with a tempo reminiscent of 'Everybody Wants to Rule the World.'
An emotional vocal & lyrical delivery is also clearly evident from Roland Orzabal (many of the songs/ lyrics were inspired by the death of Orzabal’s wife in 2017).

Following number 'Long, Long, Long Time' is less successful (it meanders along pleasantly enough but doesn’t reach the heights of the preceding tracks) but 'Break the Man,' which seems to be a modernised version of 'Pale Shelter,' is another triumph of songwriting craft and production.
'My Demons' is a menacing sounding diversion that bemoans the content of modern life while 'Rivers of Mercy' bears comparison with the best of TFF’s back catalogue.
A deeply personal song delivered with passion (from a Roland Orzabal voice that seems to be getting better with age), 'Rivers of Mercy' is an emotional and emotive six-minute journey with hard to beat arrangement and production values; it's peak TFF and a true album highlight.

The emotional and melancholic 'Please Be Happy' features the surprise inclusion of a trumpet solo; the subject matter again relates to Roland Orzabal’s loss, underlining the cathartic part it plays as part of Tipping Point.

'Master Plan' wears its Beatles-influence on its sleeve and evokes memories of 'Sowing the Seeds of Love' within its complex arrangement.
The song also includes the memorable and nostalgic line "lost between the Beatles and the Stones," which acknowledges at least one of the influences at play here (however this song is a success on its own merit).

Penultimate number 'End of Night,' with its use of electronica, is another success and one of the more upbeat songs on the album; closing number 'Stay' then shines as yet another album highlight.
The latter builds from a simple acoustic part to a duet with Curt Smith's delicate vocal, increasingly layered with more lush orchestration and synth pads (the production, with reflective reverbs, is a masterclass in studio recording).

This is unquestionably an emotional and primarily downbeat album, but eighteen years on from previous offering Everybody Loves a Happy Ending it is also a very successful and long-awaited comeback – there are naturally echoes of their past (and the Beatles continue to loom large) but there is a modernised edge to the majority of these songs.

Roland Orzabal and Curt Smith may have reached their collective Tipping Point, but thankfully not much has changed as regards their atmospheric, engaging songwriting and peerless studio craft.