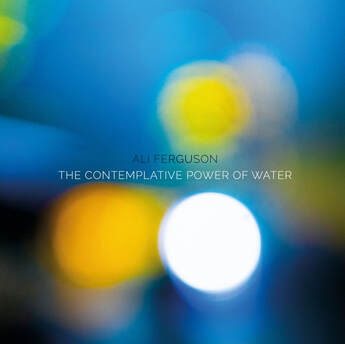 But he has also garnered some deserved recognition and acclaim for solo albums The Windmills and the Stars (2011) and A Sequence Of Moments (2016), which blend atmospheric and melodic Gilmour-esque soundscapes with spoken word sections, samples and electronica.

On the outstanding The Contemplative Power Of Water however, Ali Ferguson has truly found his own voice (in both soft-toned vocal and compositionally themed terms).

'The Contemplative Power of Water (Pt.1)' opens the album with ambient/ storm weather noise, low synth drone and some temperature forecasting static before Ali Ferguson adds scene setting narration ("This tiny planet has its own music... we sense it in the life bringing flow of the air and the contemplative power of water").
A lovely sounding guitar is then introduced (not dissimilar to David Gilmour’s intro to Pink Floyd’s 'Sorrow') before the rhythm part builds toward an electronic backbeat and mid-tempo drum track, over which Ferguson delivers an appealing slide guitar melody.
A second, shorter solo quickly follows as the rhythm track fades to return to the soundscape of the intro.
It's an impressive and atmospheric opening statement.

'Children of Men' is introduced by another soundscape (including marching sounds) before the song settles into a rhythmic, funk groove and a heavily effected (but highly effective) vocal part – the switch to acoustic guitar for the chorus also impresses.

The gorgeous and Celtic influenced 'The River Crows' features guest vocalist Karin Tenggren on the intro before the song switches to a picked acoustic guitar over a synth pad, with a sublime vocal part from Ali Ferguson and Tenggren; the chorus (highlighted by pedal steel and strings) matches the verse for subtlety.
The rhythm track is equally tasteful, with percussion as the key, until after the second chorus when an understated drum part is introduced.
The song builds slowly on a melody picked out by an evocative tin whistle (courtesy of Ross Ainslie) interplaying with electric guitar figures, before returning to the ambient soundscape of the intro.
'Stare into the Sunlight (Release/Control)' continues the Celtic theme but less obviously.
Ali Ferguson pulls out another memorable chorus after which a retro synth line punctuates, before a return to the verse.
Some effective piano parts are then introduced to add another layer before the middle 8 introduces heavier, chugging guitar parts over which an excellent guitar solo is added.
The song then returns to the chorus and a finishing section of electronica and vocal effects.

'Part 2' of the title track is ushered in with more ambience (and birdsong) before dissonant electronica and sequencer overlays are introduced.
The primarily instrumental piece then builds toward a satisfying melodic section before it returns to the ambient soundscape and birdsong of its opening (a modern-day John Martyn with better tech comes to mind; a compliment of the highest order).

The late and great John Martyn is also reflected within the laid back 'The Catacombs,' which could be straight out of the latter day Martyn electric period.
Ali Ferguson again builds towards a memorable chorus, adding layers of appropriate and well thought out parts for both keyboards and guitar. There is also a fabulous guitar solo towards the end, which is preceded by some EDM samples, which somehow works.

'You Can’t Hold an Ocean,' with more layers, vocals with tasteful effects, a bit of rock guitar and slap bass, is another triumph of applying just the right amount of influences.
Carrying itself as electro-pop with intelligence and nous, the song then plays out with a heavyweight guitar solo over a repeating vocal figure.

'Peace Begins With Me' is a lush, downtempo number driven by percussive electronica before a drum part kicks it on (there’s also a lovely synth solo added after the first chorus).
Anthemic music with a message (most of the lyrics are shaped as extended mantras), bolstered by an excellent production from Ali Ferguson and an equally impressive mix by Graeme Hughes (which is the case throughout); what’s not to love?

The third part of the progressively themed title track (which incorporates the poem 'Peace' by Sara Teasdale in the lyrics) closes out the album rhythmically hypnotic style.
The slow drone and ambience of the intro is interrupted by a heavily reverbed guitar that again betrays the obvious David Gilmour influence – however, this is done with enough originality, and produced so beautifully, that it should entice Pink Floyd fans rather than discourage them.
The track, which features the entire Ferguson family as the ‘title-chorus’ choir, develops with increasing intensity before falling away to another ambient soundscape and ethnic choral chants.

The commonly used label description of "Ambient Prog" doesn’t come close to describing the nuances, subtleties or layers of this album.
​
​That it’s already a contender for album of the year (in any genre) however, gives you an idea of the Compositional Power of Ali Ferguson.