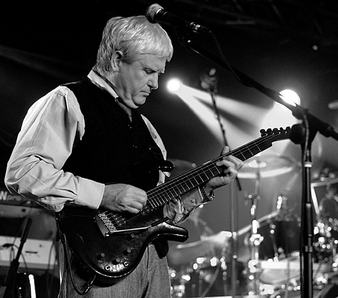 While Barclay James Harvest, in original continuity, ended in 1998, it’s been the best of both worlds since that time for their fans and BJH audiences across the UK and Europe – following the band’s demise original members John Lees (guitars, vocals) and Les Holroyd (bass, vocals) formed successful Barclay James Harvest splinter groups; both tour successfully to this day.

Ross Muir: You’re back out on the road in November but as I mentioned in the introduction you had the honour of headlining the Acoustic Stage at Glastonbury in the summer…

John Lees: That’s right, yeah. We headlined the stage on the Friday night but it was a sea of mud! [laughs]. That didn’t affect us, but Glastonbury is Glastonbury; it’s just one of those events where you just have to accept what it could be like and everything’s always a rush – you queue for hours, then you’re convoyed to the stage, you get out of your transportation, you’re straight out on to the stage, you plug in and start playing. No frills! [laughs] But it was fine, really.

RM: Indeed; and a prestigious slot – nor was this an acoustic set.

RM: From Glastonbury to back on the road for another run of UK dates which are significant in that they celebrate the fiftieth year since Barclay James Harvest founded and started performing.
Does it seem like fifty years?

JL: I didn’t even know it was fifty years until somebody told me! [laughs] – and if you had said to me fifty years ago that I’d still be doing this when I was nearing seventy I would have said "no way!" [laughs].
But no, it doesn’t seem like fifty years, but time moves on and there has been such a massive amount of music by the Barclays. It’s quite incredible really.

RM: Plus, of course, with this particular band you have newer material such as the North album, allowing you to pepper the set with newer songs while playing the classic tracks.

JL: Yeah, it’s great; it’s a win-win all the way round. The way we tour and the way we do gigs now it’s so much easier than it was back in the day. The guys that I work with are really supportive and we just have a really good time – we’re a boys club, we meet up twice a week and usually to talk about the material.
As a consequence of that we can go out and do the gigs – the shows we’re doing in November in England are more like a continuation of the concerts we’ve been doing throughout the year.

RM: Interesting you refer to it as a "boys club" because there is a clear camaraderie within this band.
You, Craig Fletcher and Kevin Whitehead have been together since 1998 and Jez Smith came on board eight years ago – in a reimagined day and rebranded age where bands reform with interchangeable personnel, sound-a-likes or even family members, that’s very refreshing.

JL: It’s amazing; we’re all good friends and we share a love of the music.
I know I wrote quite a big tranche of the material, or it certainly feels like that, but I don’t have anything in common with the early stuff other than I created it – although if I’m really pushed I can remember why I created it [laughs].
But I can see and hear it in a whole new light playing with these guys – it’s almost like I’m playing somebody else’s stuff, especially if Craig is singing some of the songs. It’s great, it really is a win-win as I said earlier. But the main thing is the people who have bought all the albums or records in the past, they’re the ones who have really invested in Barclay James Harvest. So as long as we can play the music it seems to me that we owe it to them to do just that for as long as they want to come along and listen to it.

RM: That’s a lovely was to put it. And I agree with the win-win; you really do seem to have captured the spirit, or musical essence if you like of the original BJH bit with a real present day sensibility through the new material on Nexus and more lately North, a great little album which I mentioned earlier.

JL: Thank you. I think the other part of that is we work as a partnership.
The original Barclays James Harvest was also a partnership but it ceased to be a partnership when competition entered in to it. I’ve managed to revert back to that partnership with this band and it’s also a democracy; when we did the songs for the albums, I wanted the other band members to be involved in writing the songs, which they were.
To me, that makes the sound more realistic and easier – it’s easier to do good songs when you have a lot of input around you. 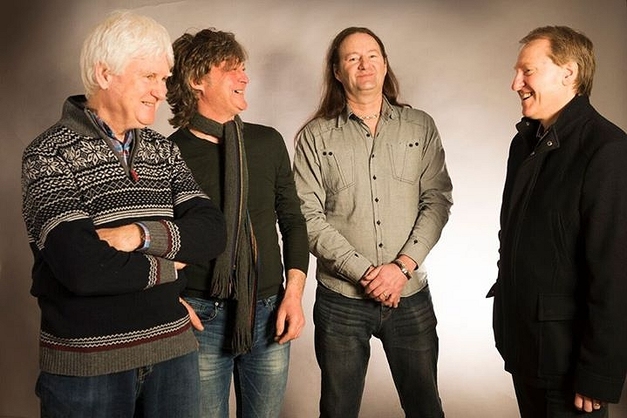 John Lees (far left) and his Barclay James Harvest "boys club" – Craig Fletcher (bass, vocals), Kevin
Whitehead (drums) and Jez Smith (keyboards). "We have a really good time, we're all good friends
and we share a love of the music."

RM: 2016 has also seen the remastered reissue of a number of Barclay James Harvest albums; I’d like to touch on three of them, starting with Everyone is Everybody Else.
While I agree with the critical overview that it's the band’s creative masterpiece I described it in review as the band’s flawed masterpiece – primarily because it contained perhaps the greatest ever set of BJH songs but marred by a production that didn’t suit the Barclays sound…

JL: Well it was really strange that they put us with Rodger Bain, but that’s maybe pointing to the fact that we were less cohesive as a unit then. When you’re not cohesive enough, or not agreeing with one another, it’s hard to get consistency and things tend to get pushed on you.
Rodger, bless him, was a great heavy metal producer but was as far from us and our sound as you could believe. Interestingly when Craig, who is in the studio with me now putting the finishing touches to the next reissue, was going through the masters of Everyone is Everybody Else he picked up on the fact that they had never cleaned out the original tapes – all the comments the band made at the time are on there! [laughs]
In one or two of those instances you can hear a kind of desperation of what we should be doing – "what do you want me to do here?" and "what do you want this part to be like?"
When Craig came to do the new mixes for that album he found so much stuff on the tapes that didn’t make it to the final mix. We had our own arrangements of how we saw the songs, but they didn’t make the vinyl!
And I think that was because of Rodger’s heavy metal background, rather than going with what was required.

RM: Yet the album became a landmark release for BJH and a serious marker in melodically progressive rock led, of course, by the timeless classic Child of the Universe. Not everyone will know however that the original version was on your solo album A Major Fancy, recorded in 1972 but not released until 1977…

JL: That’s right; the rest of the band didn’t want to do Child of the Universe and it got overlooked originally.
I then used it for my solo record but we changed record labels and my album got side tracked – but the band then wanted to record it, having heard my version of it. And it’s quite a different version I think.

RM: It is. I particularly like your original arrangement with the choral touches and strings, contrasting with the layered and building Barclays version…
​RM: Three albums and three years on from Everyone is Everybody Else came Gone to Earth, an album that made quite the impact in terms of popularity and mainstream Europe success. It also features two of the band’s most recognisable and famous numbers, Poor Man’s Moody Blues and Hymn.

JL: Hymn goes back to the Abbey Road Studio days of our earliest albums.
At one point, for the third album (Barclay James Harvest and Other Short Stories) we were just jotting ideas down – a sketchbook for songs that might become tracks.
Wally Allen was producing the album with us and we played him a few things we were working on; Hymn was one of them but it was rejected; it took us a long time to work it through and get it right.

RM: Worth the wait though; such a beautiful and atmospheric number. Poor Man’s Moody Blues, your retort to that same disparaging remark as made by a critic back in the day, has become equally popular.
But did you ever think a pastiche would become such a significant part of Barclays history and repertoire?

JL: I had no idea [laughs]. One of the most bizarre things about that song happened in Greece.
We had never toured Greece until a few years ago – the way we tour now actually makes it easier to get to all these different places – when we arrived in Greece for our first show one of the guys there a said "you do play Poor Man’s Moody Blues, don’t you?" The reason he was asking was because it’s the Wedding Song in Greece! It’s the first dance song!

JL: I know; I was absolutely gobsmacked – I mean you couldn’t write it, could you? [laughs]
But yeah, I am so surprised about the longevity of that song.

RM: Such a clever song too – pretty much the same chord structure as Night in White Satin; same tempo, similar lyric and lyrical phrasing…

JL: That’s absolutely right; it’s not an exact copy but it's a homage and a song that stands up in its own right. And the nice thing about it is Justin Hayward always says we’re "the rich man’s Moody Blues" [laughs]

RM: As the musically changing eighties prepared for the equally changing nineties, Welcome to the Show gave Barclay James Harvest a new lease of life in 1990, mixing polished AOR with more traditional Barclays arrangements and rockier, thought-provoking songs such as your own Cheap the Bullet.

JL: That was one of the last ones the original band did but we didn’t really work together, to be honest.
We worked with sound engineer Andy MacPherson and producer Jon Astley at Andy Mac’s Revolution Studios in Cheadle Hulme, but a lot of the actual groundwork was done at my own studios.
I sent my demos down to Andy Mac more or less "as is" and I remember Andy being absolutely beside himself because he couldn’t get the sound for Cheap the Bullet as it was on the original demo!
There were some class songs on that album but I think they were recorded, or set up, a certain way because we really weren’t playing as a group then.

RM: This would be the band’s first true introduction to digital recording and the Fairlight sampler?

JL: Yeah, when we started to work with Andy Mac and Jon Astley they spent the first two weeks sampling Mel Pritchard's drum sounds in to the Fairlight. Mel sat there banging his snare drum, banging his toms, banging his bass drum, hitting each cymbal, for two weeks! So you get the picture [laughs]

RM: Indeed I do, but worth it in the end as Welcome to the Show is regularly cited as the best late era BJH album – giving us the perfect play-out opportunity.
John, thanks for chatting to FabricationsHQ and here’s to many more John Lees’ Barclay James Harvest shows celebrating fifty years – and beyond – of BJH music.

Audio tracks presented to accompany the above article and to promote the work of the artists.
No infringement of copyright is intended.  ​