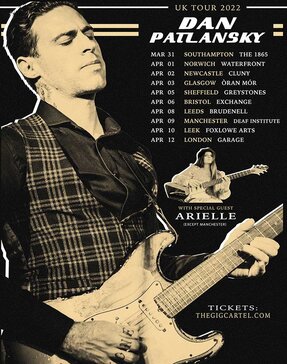 It was good news indeed to report that after a sold-out show at the Oran Mor for Eric Gales just two days prior, there was a sizeable attendance of Glasgow’s blues cognoscenti for noted and award winning South African blues-rock singer-guitarist Dan Patlansky and his band as they promote Patlansky’s current album Shelter Of Bones (his most personal and all-encompassing release to date).

The turnout was all the more impressive, and a sign of Dan Patlansky’s blues rock (sometimes spelt r a w k) cred, given it was a Sunday show at a venue outside of the city centre (which can be a tough sell).

The evening’s proceedings were kicked off by American melodic pop-blues gal Arielle, who may be best known for her association with Brian May’s guitar company and "The Arielle" signature guitar (built by May Guitars) she sports.

On this tour Arielle was in duo mode with bassist Devon North; while such a setting for her songs offered a change of, at times, more singer-songwriter pace, a few numbers (those more commonly heard in fuller arrangement and/ or on album), suffered from the lack of tangible rhythm. 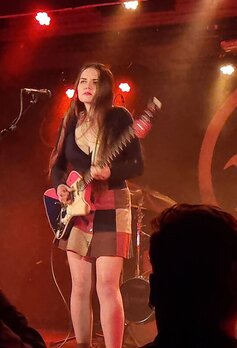 ​Arielle however is a good singer and a very good guitarist; with songs such as bluesy set opener 'Voices in My Head,' boogie number 'You’re Still a Man' (from current album Analog Girl in a Digital World) and new number '73' (from forthcoming studio album) she guaranteed herself a warm reception from a crowd who were settling themselves in for the arrival of Dan Patlansky’s more blues raucous set.
(Performing her song 'I'd Rather Be in England' as a reworded 'I'd Rather Be in Scotland' however, especially given its Old English / hey nonny nonny styled folk arrangement, was a misfire).

The Dan Patlansky trio (Patlansky and Brighton based rhythm section Tom Swann (bass) and Ben Matthews (drums); both extremely good players) took to the stage with a confidence that upped the ante immediately.

DP wasted no time, through the first three numbers, in demonstrating he can play with some on-the money rhythm work, interspersed with flurries of notes (and blues-inflected string bending), all played with some ferocity.
​
Those opening three numbers were a blues-rock salvo of the highest order – the Instrumental 'Lift Off' was closely followed by the opening brace from Shelter of Bones, 'Soul Parasite' (a muscular, riff driven number) and 'Snake Oil City' (a heavy blues shuffle).
Both included accomplished and gritty vocals from DP while his stellar guitar work reminded of Gary Moore and Scott Henderson (high praise indeed).

Another positive of DP’s playing is his guitar tone, which is ideally suited to the genre.
This was amply demonstrated on the sparser and personal 'Lost' (also from the new album) which highlighted the pure but slightly overdriven sound of his Masterbuilt Strat (make no mistake, this guy knows what he is doing with a six-string in his hands).
By the time 'Lost' had been performed the sound had, thankfully, markedly improved, allowing the nuances of DP’s voice and guitar to be heard (the opening numbers were slightly muddy and the bottom end over-emphasised). 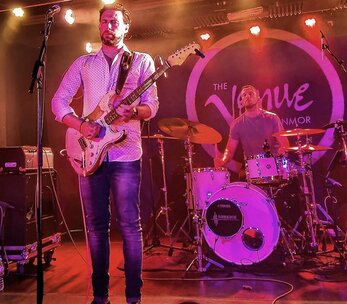 ​'Stop the Messin'' (from 2016 album Introvertigo) then provided contrast with its undertones of funk; a great chorus and vocal performance elevated this number to one of the highlights of the set.

Blues stomper 'Bad Soul,' a commercial sounding number with a retro vibe, conjured up the ghost of the band Free (no bad thing); a much earlier DP number 'Heart of Stone' then provided a drop in tempo but not in the quality of the guitar parts.
​On what was almost a traditional slow blues tear-jerker, DP demonstrated both lightness of touch and a ‘choice of note,’ which few guitarists ever master.

As the set moved into the home straight, and after an outing for 'Hounds Loose' from the new album, DP introduced one of the songs he is probably best known for – the classy slow blues 'Big Things Going Down,' from 2009 album Move My Soul.
Of the song DP tells an amusing story of being approached by a random guy who wanted to construct a video around the song. Dan agreed, but when he saw it, he thought it was awful – however said video has gone on to accumulate nearly 4.5 million views on YouTube.
On 'Big Things Going Down' DP showcased his expertise in an extended solo where he wrung notes out of his Strat with a flawless vibrato technique, followed by a flurry of cascading lines (think Eric Johnson with more blues). A true highlight of the set.

'Backbite,' from 2014’s Dear Silence Thieves (the album that set him on his way in the UK & European blues rock scene) is, simply, a great blues/funk/rock workout reminiscent of 'Trampled Underfoot' by Led Zeppelin (it also contains a great hook and featured another impressive solo section, incorporating wah-wah).

DP then acknowledged Stevie Ray Vaughan as a major influence by launching into a pair of the great man’s songs by way of a 'Scuttle Buttin’' / 'Say What?' medley, which received a great reception from the Glasgow crowd.

The set ended on the seriously impressive slow burner 'I’ll Keep Trying' from Shelter of Bones.
An impassioned vocal delivery and some lovely guitar motifs moved the song toward a glorious key change and a final bravura solo where DP proved (yet again) he is a serious player (in both senses).

There are quite a few blues-rock guitarists on the UK and European circuit who definitely have the chops.
And there’s most certainly one from South Africa.