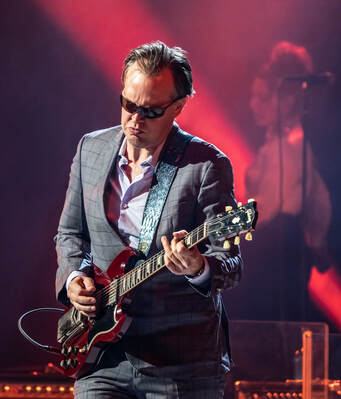 Joe Bonamassa hadn’t played in Glasgow for over three years (some sort of pandemic apparently; you may have heard about it) when he brought over his full band, including horn section, whilst touring in support of his Royal Tea album.
​
There was therefore some long-awaited anticipation at the SEC Armadillo, and an expectation that the set would lean heavily on Bonamassa's latest album Time Clocks, this time in the company of his smaller format band.
However the fact the set didn’t concentrate on Time Clocks, but instead dipped in to deeper back catalogue cuts, would prove to be an added bonus.

Opener 'Evil Mama,' from Joe Bonamassa's 2018 album Redemption, was performed with gusto by all. (A slightly slimmed-down arrangement of the recorded version (no horn section), but the number didn’t consequently suffer).
Bonamassa duly delivered a stunning solo that referenced the studio version before slipping, seamlessly, into the middle eight and choruses.

The band then segued into the down-tempo title track from 2011’s Dust Bowl. The latter is one of the more atmospheric numbers from Joe Bonamassa’s back catalogue and was, again, delivered with some panache and expertise by his band – but that should be no surprise given the pedigree of the players include three Nashville veterans in Steve Mackey (bass), Greg Morrow (drums) and the great Reece Wynans (keyboards).

'Love Ain’t a Love Song,' from 2014 release Different Shades of Blue, highlighted the funkier side of the back catalogue before the band shifted gear again for Gary Moore's 'Midnight Blues.'
A staple of Joe Bonamassa’s live set-list for a number of years, 'Midnight Blues' was also the first song to feature a Les Paul (almost every song saw guitar-slinger JoBo use a different instrument from his collection); the cover & chosen guitar heightened the inevitable (and noticeable) Gary Moore influence and comparisons, both sonically and stylistically.

Another blues-inflected number, 'The Heart That Never Waits,' included a switch to a Telecaster as Joe Bonamassa and band showcased the first number from Time Clocks.
The song also gave the remaining band members the opportunity to shine – guitarist Josh Smith contributed a very accomplished solo while backing singers Jade Macrae and Dani De Andrea got short solo spots outside of their impeccable harmony parts.

The driving and up-tempo 'I Didn’t Think She Would Do It' from Royal Tea is a song with a retro feel, reminiscent of Cream / Hendrix; it was also delivered with no little passion and some Joe Bonamassa wah-wah guitar pyrotechnics.

The tempo was dropped slightly for Redemption number 'Just 'Cos You Can Don’t Mean You Should,’ which is another that sits firmly in Gary Moore blues territory. Reece Wynans got the opportunity to really shine on this one (receiving considerable applause from the appreciative audience) while Joe Bonamassa played out the song with an extended solo (which was equally well received). 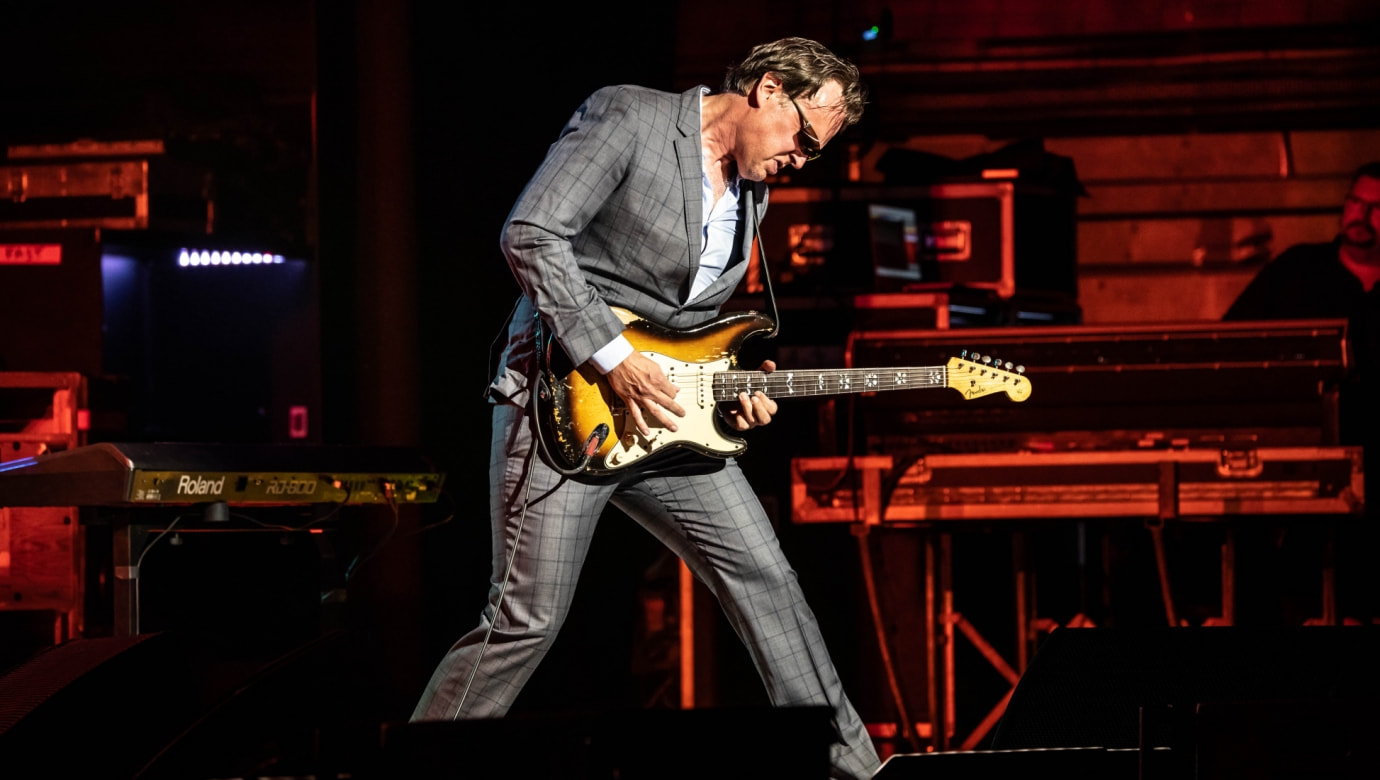 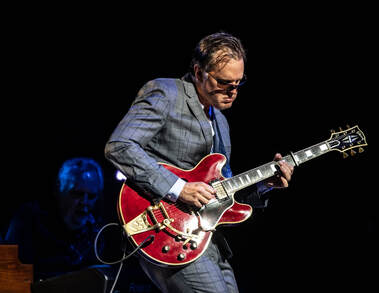 Heading for the home straight, and nine numbers into the set, Joe Bonamassa finally spoke to the audience. In a strange piece of dialogue, he referred to jet lag, swore a bit, said he won’t be procreating and then thanked his band.
The results were an engagement with the audience that proved unequivocally, if there was still any doubt, Joe Bonamassa is far more comfortable playing, singing and performing to an audience than he is addressing it.

Following the strange chat normal services were resumed with a Royal Tea double of 'A Conversation With Alice' and 'Lonely Boy;' the latter provided the only dip in main set proceedings given its perfunctory 12 bar arrangement (and having to follow the impressive array of songs that had gone before).

The dip was short lived however as 'The Ballad of John Henry' came out the traps like a full-blown, Led Zep epic.
This juggernaut of a number came over like a bluesy 'Kashmir' with a Bonham-esque backbeat and a bravura guitar solo. A definite gig highlight and a well-chosen number on which to end the main set.

​The encore initially disappointed as Joe Bonamassa reappeared on stage to deliver solo acoustic number 'Woke Up Dreaming.' While the acoustic work-out has become another staple of the live-set, the overly-long version performed at Glasgow veered into self-indulgence with an acoustic wig-out that did little more than demonstrate how quickly, quietly, then loudly, the fast-fingered JoBo can play his acoustic.

However, another highlight (arguably the best moment of the entire set) came by way of a tasteful and dynamic version of 'Sloe Gin,' which Joe Bonamassa acknowledges as one of his most popular songs (although actually written by Bob Ezrin & Michael Kamen and first recorded by actor & singer Tim Curry).

The whole band duly delivered a great version of this atmospheric-blues epic, with Bonamassa contributing one of his best solos of the evening (his note choices and judicious use of flurries of notes were particularly impressive).

At set end the Armadillo audience went home very happy indeed, having seen a thoroughly polished and professional gig that featured highlights from throughout most of Joe Bonamassa’s long and prolific career.

Indeed, this may have been one of Joe Bonamassa and band’s best all-round performances thus far, in the company of a set-list that served as a career retrospective of a guitarist who has developed into something of a blues-rock, and highly marketable, phenomenon these last twenty years or so.

Photo Credits: James Edmond c/o Scottish Music Network
Joe Bonamassa will be playing a number of European dates through late April and early May before returning to the UK for two dates at the Royal Albert Hall in London on May 5th & 6th.
Ticket availability for RAH gigs via Planet Rock Tickets, Ticketmaster or direct from venue.