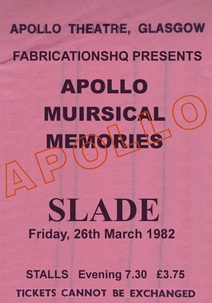 "Welcome brethren, to the evening service...
For what you are about to receive, may the Lord help you…"

It could only have been a Slade concert; Hallelujah to that.

The above short sermon, delivered by the Rock Reverend Neville John Holder, received one of the loudest cheers of the night from the Glaswegian congregation.

It was also one of the few calms in the raucous and roll storm that was any 70’s or 80’s Slade gig you care to mention, epitomised by the band’s many Glasgow Apollo performances.

The band’s 1982 show at the legendary venue featured a number of songs from the aptly named Till Deaf Us Do Part, released in November of the previous year.

The big and brash Till Deaf tunes perfectly complimented the glam rock classics from a near-decade earlier when the band was never off the charts and always on the radio.

The thunderous opening of ‘Rock and Roll Preacher’ was followed by crowd favourite and staple of Slade’s 80’s gigs ‘When I’m Dancin’ I Ain’t Fightin’.’
The song found fame as part of Slade’s now legendary 1980 Reading Festival set (and featured on the Alive at Reading EP), but the studio version had appeared earlier that year on the band’s excellent but virtually unknown Six Of The Best EP; it later resurfaced on We'll Bring the House Down.

The title track of the aforementioned album became another ever-present of Slade's 80's sets and was a stage-rattling highlight of the gig – if ever a song was geared for the live environment it was ‘We'll Bring The House Down.’
Written around a crowd chant and driven by Don Powell’s beefy drum riff, the song put the band firmly back on the musical radar and back in the charts.

Prior to Slade bringing the house of Apollo down (only in the performance sense, thankfully; seven years later the Demolition Contractor would be more literal) the heavy melodic pop of ‘Ruby Red’ and the power rock of ‘Lock Up Your daughters’ shared the stage with the Slade classics ‘Take Me Back ‘Ome' (featuring some great bass-riff lines from Jim Lea) and ‘Gudbye T’Jane,’ played so fast it had lapped the studio version by the time it got to the guitar-shuffle break.

But it wasn’t all full-steam ahead – some forty-five minutes before the Apollo crowd was waving Gudbye T’Slade the instrumental ‘M’hat M’coat’ and the band’s power ballad ‘Everyday’ had served as the mid-set breather.
The former gave guitarist Dave Hill, more commonly associated with big riffs, power chords and whammy bar bends, the chance to pull out some melodic lead lines; the latter is mandatory sing-a-long time, with the Glasgow Choir in fine voice.

Noddy Holder, one of the most charismatic rock and roll front men ever to get in front of a microphone (and one of the few voices that could genuinely carry from a stage without one), had the crowd's undivided attention from that early sermon to his flock.
But when he hollered out his trademark "Well aaaaall right, everybody!" introduction to ‘Get Down and Get With It’ he had the crowd hanging on his every word, clapping those hands and stomping those feet.

Two covers, both previously recorded by Slade but far stronger in the live environment, heralded the end of the show.
Chuck Berry's ‘I’m a Rocker’ was extended to feature a smatterings of lines from other rock and roll standards including ‘Bony Maronie’ while the band's full-on rendition of Steppenwolf’s ‘Born to Be Wild’ made for a storming finale.

Some of my favourite Glasgow Apollo moments have come from Slade concerts and the band's 1982 performance was no exception.
But it was an event immediately after the gig and outside the famous theatre that produced my most enduring memory.

Slade may have finished their set with two covers but the show actually finished with a third.
‘Singin’ in the Rain,’ a song as famous for Gene Kelly’s brilliant dance routine as it is for its music and lyrics, had been Slade’s outro tape for a few years; it guaranteed the audience left the shows with, as the song implies, a happy refrain.

One individual, having been thoroughly Slayed, headed down the road singing not in the rain but in the chilly air of a March night, mimicking Kelly’s dance routine around street lights and atop metal litter bins, all the while consoling and sympathising with anyone passing in the opposite direction who had clearly missed the rock and roll party at 126 Renfield Street.

It could only have been a Slade concert.


'Preaching to the Glasgow Choir' is the first in a series of Apollo Muirsical Memories, reflecting upon and recalling some of the best-ever rock shows at one of the best-ever venues.
The retrospective reviews were inspired by Rescued Recordings, a non-profit making undertaking by fans dedicated to archiving as many Glasgow Apollo/ Green’s Playhouse rock and pop concerts as possible through the collation of official live releases, radio broadcasts, soundboard and audience recordings.

Between 1973 and 1985 (and from the late 60’s as Green’s Playhouse, when the cinema and ballroom complex became a live music theatre) the Glasgow Apollo was the venue for rock and pop gigs in the UK.