The Milk Men - Spin The Bottle 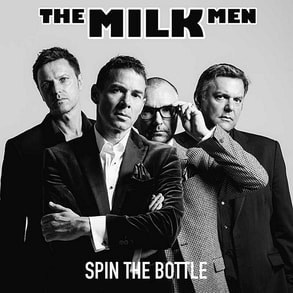 They may have initially (and intentionally) started life as a fun R&B/ blues group with the sound and vibe of Dr Feelgood (a band that forms part of their musical DNA) but The Milk Men are no one trick pony pulling a milk float.

Built around the songwriting talents of band co-founders Jamie Smy (lead vocals) and Adam Norsworthy (guitar, backing vocals, keys) the quartet, completed by ex-Pirates drummer Mike Roberts and bassist Lloyd Green (son of legendary Pirates guitarist Mick Green) have, album by album, developed and broadened their style.
​
Indeed there’s many an influence sitting atop the band’s Feelgood foundation, from The Beatles and Queen (particularly the well-crafted harmony pop hooks and choruses) to 60s beat-pop, rhythm and soul, Chuck Berry and the Stones.

Combine the above with Jamie Smy’s gravelly blues vocality, Adam Norsworthy’s quirky earworm riffs & effective lead work, sharp beats from the equally sharp-dressed Mike Roberts and Lloyd Green’s bass skills
(a player who can hold down the low end or thread a bubbly bass line a la John Entwistle), and you have a band spinning the bottle and kissing a winner.

The album doesn’t just have the songs however, it has the sound.
Clearly looking to capture their live dynamic, everyone involved in the audio process has done just that, and in fine, retain-the-energy style.
The songs, recorded by James Welch, were produced by Adam Norsworthy & Wayne Proctor; the latter then mixed & mastered the album (Proctor and his House Of Tone team have long since established themselves as one of the go-to crews for sonic satisfaction).

The rock and fast car roll of 'Driving It' (if AC/DC were a rhythm and blues band) makes for a feisty and fun opener but it’s but one facet of The Milk Men on Spin The Bottle, where the band stretch further than before with some clever songwriting and a diversification of the rock, rhythm and blues form.

Example? Following number 'Cheap Seats,' with its if-it-wasn’t-for-bad-luck lyrical tale, is clearly influenced by early era ZZ Top but it also features not one but two catchy riffs, "whoa-oh" fronted choruses and a clever clavinet injected nod to Stevie Wonder’s 'Superstition.'
As Spin the Bottle progresses you realise how cohesive the album is, even with its broader scope (the whole being greater than the sum of its parts) – case in point is 'Go Go Baby,' a fun but throwaway piece of rock and roll in its lead-off single form but here, as part of the bigger album picture, it dovetails perfectly.
'Go Go Baby' also provides short and sharp contrast to following number 'Adelaide,' a lovely acoustic-backed number that is as melodically southern as it is Rod & The Faces (Jamie Smy seems to be channelling early Rod Stewart here; no bad thing).

The blues then come calling through two very different stylings.
'How Do You Think I Feel?' is contemporary, melodic blues with a back-stabbing lyrical twist (losing your girl to your best friend); for old school slow blues, look and listen no further to the Hammond (courtesy of the aforementioned James Welch) & piano backed 'I Sing the Blues,' which Jaimie Smy certainly does (by keeping it vocally understated he makes it more emotive). Smy’s vocal/ lyric on the latter is complemented by some tasteful, then purposeful, lead & harmony guitar work from Adam Norsworthy.

'Gabba Gabba Hey' and 'Fabulous' (two of three songs written or co-written by Lloyd Green) are a delightfully fun brace of mid-tempo, glam-tinged rock and throwback roll.
The former, a lyrical tribute to the Ramones, comes across like said band meeting Mott the Hoople for a night out; 'Fabulous' is The Milk Men doing Mud doing their best Elvis impression, including obligatory "uh-huh-huh" ad-libs.

Yet another change of pace and style is offered up by 'Highway Woman' (the other Lloyd Green co-write), a gritty slice of 70s styled blues-rock with harmony-vocal choruses and psychedelic wah affected soloing from Adam Norsworthy.

The album closes out on 'Bad Seed,' a slower and, again, slightly psychedelic/ late 60s sounding dark-rock ballad that packs a lot into its deceptively short three minutes.
It’s also the perfect closing statement to what is unquestionably The Milk Men’s best, and most all-encompassing, album to date.