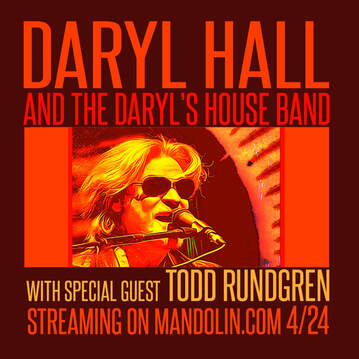 As a part-celebration of Daryl Hall having just wrapped up the first leg of his first tour in over a decade, his show at the Ryman Auditorium from 3rd April was streamed for a ticket buying global audience three weeks later by the leading live stream concert platform Mandolin.

Special Guest on the tour (and two-time guest on Live From Daryl’s House) Todd Rundgren was in fine voice throughout his one-hour opening set (he seems to have gotten stronger in his modal voice and diaphragm these last ten years or so).
​
Backed by Daryl Hall’s highly accomplished, multi-disciplined six-piece band and opening with a soul-i-fied version of 'Real Man' from Todd Rundgren's 1975 album Initiation, Charlie DeChant’s saxophone outro segued to perennial fan favourite 'Love of the Common Man,' here in fitting, crooner soul arrangement. 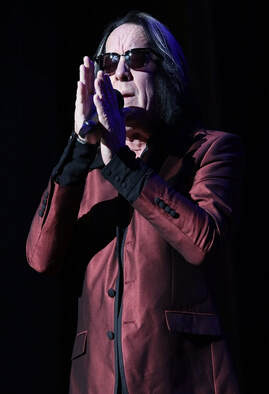 Ballad 'It Wouldn’t Have Made Any Difference' (from Todd Rundgren’s seminal Something/ Anything? album) Is a Philly soul styled classic (even in Nashville) while the surprise of the set was the inclusion of his first pop hit 'We Gotta Get You as Woman,' which goes back to Rundgren’s 1970 debut solo album Runt.
His bigger pop hit, 'I Saw the Light,' got a more expected airing.

Bringing things back to more modern Todd was the mid-tempo rock-groove of 'Buffalo Grass' from 2000 album One Long Year, which gave Rundgren a chance to strap on latest six-string acquisition "Pearly."

Rundgren then went back to S/A? for a purposeful and muscly rendition 'Black Maria' (with sharp guitar licks a plenty) before getting bluesy on "Pearly" for 'Unloved Children.'

'Hello It’s Me,' in full soul-pop mode, proved TR still has his falsetto while the slightly slower tempo of 'Sometimes I Don’t Know What to Feel' (featuring percussionist Porter Carroll Jr. on secondary vocals) provided yet another highlight.

The saxophone of Charlie DeChant introduced the soul moment (or moments) of the set as Todd Rundgren and band delivered the 'I’m So Proud/ Ooh Baby Baby/ I Want You' medley before a soul-rock swingin’ 'For the Want of a Nail' made a fitting finale to what was an almost soul revue set. ​
​Daryl Hall played his opening BeforeAfter hand perfectly by kicking off with pop-rockin’ hit single 'Dreamtime,' which had the already on-side audience on their feet from the "living on dreamtime" sing-a-long get-go.

The choppy rhythm of the pseudo funky 'It’s Uncanny' then offered itself up as the first of six Hall & Oates numbers (if you’re part of the best-selling music duo of all-time you’re fully entitled to showcase some of those wares) before a trio of Daryl Hall solo tracks set the BeforeAfter tone (the sultry sway of 'Problem With You,' perfectly titled ballad 'I'm in a Philly Mood', the late night vibe of 'Cab Driver').

It must irk (or perhaps tickle) Daryl Hall that many folks on both sides of the pond still think 'Everytime You Go Away' is a Paul Young hit covered by Hall & Oates and not the vice versa reality.
Either way, as heard at the Ryman, Hall still has the soul-pipes (if not the upper range) to keep it his own (nor did it hurt to have the song complemented by a tasty organ and saxophone solo from the respective talents of Elliot Lewis and Charlie DeChant before it morphed to a funky finale). 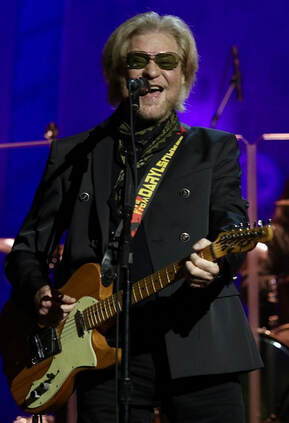 A brace of solo offerings in the shape of the quirky and Stonesy 'Sacred Songs' and more theatrical rock & pop of 'Babs And Babs' (both featuring Daryl Hall on piano) returned to the BeforeAfter career showcase.
Hall stayed on piano to introduce surprise guest Dave Stewart to the stage for their stripped back, piano and acoustic guitar version of 'Here Comes the Rain Again,' as first heard on Live From Daryl’s House.

As well received as Dave Stewart and the duet was, two of the biggest cheers of the show were reserved for main set closers (and bona fide Hall & Oates classics) 'Sara Smile' and biggest sing-a-long moment of the evening 'I Can't Go for That (No Can Do).'
Said cheers were equalled only by the shouts to get Daryl Hall and his band back for a four song encore (three of which featured Todd Rundgren), which was almost worth the Ryman admission fee or Stream ticket purchase on its own.

Hall & Oates number 'Wait For Me,' featuring Todd Rundgren on shared vocals with Daryl Hall, is one of the most melodically charged and genuinely heartfelt songs Daryl Hall has ever written; fitting then that it’s piano and choral vocal arrangement was followed by the similarly shaped, and equally emotive, Rundgren classic 'Can We Still Be Friends.'

Contrast was then provided by the 60s R&B pop-fun of 'Expressway to Your Heart' by The Soul Survivors before stupidly infectious Hall & Oates number 'You Make My Dreams' closed out the show in fine, rock ‘n’ soul-poppin’ fashion.

As a live career retrospective, situated in a lovely and historic auditorium in Music City, this was a first class (ticket) show.
But you would expect no less from the songwriting and performance talents of Daryl Hall and indeed Todd Rundgren.

See you at Daryl’s House for the BeforeAfter party.