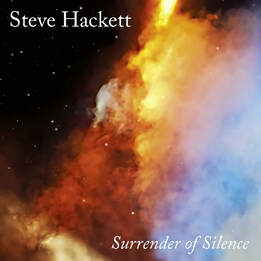 After the classically shaped delicacy of Under a Mediterranean Sky in January, guitar luminary Steve Hackett returns for the second time in a year (he’d been a busy lockdown boy) in full electric form for Surrender of Silence.

Steve Hackett’s twenty-seventh studio solo album returns the ex-Genesis man to not just his progressive & rock themed world music (as heard to excellent, chart success effect on Wolflight (2015), Night Siren (20176) and last year’s At The Edge of Light) but his penchant for featuring his core band (including right-hand keyboard man Roger King), various guest players/ vocalists and musicians from around the world and their region specific instrumentation (a baker’s dozen of 13 musicians/ singers join Hackett for Surrender of Silence).

The album opens with short instrumental 'The Obliterati' (a dark rhythmic track that melds Hackett’s expressive guitar lines with orchestration), which then segues to 'Natlaia,' a sad but too often true tale of the fate of a Russian "Everywoman" at the hands of oppressive regimes.

The six minute 'Natalia' also cleverly mixes atmospheric rise and fall with a somewhat borrowed homage to Prokofiev in the classical rearranged shape of 'Montagues and Capulets' ('Dance of the Knights').
Poignant, Slavic storytelling prog? Believe it.
Rock instrumental 'Relaxation Music For Sharks (Featuring Feeding Frenzy)' does pretty much what it says on the (very large) bait tin.
Featuring bassist Jonas Reingold and drummer Nick D’Virgilio, 'Music For Sharks' is a time-changing, finger flexing guitar romp through the orchestrated waves and swirling waters of sharp-biting prog, bookended by calmer, before and after the frenzy, keyboard lapping.

Complete contrast is then provided by the Africana rhythms and pop stylings of 'Wingbeats,' featuring Amanda Lehmann (who has just released her debut solo album Innocence and Illusion) in harmony vocal duet with Steve Hackett, complemented by the backing vocal cries of Durga and Lorelei McBroom.

'The Devil’s Cathedral' is another where the title offers up a clue as to its musical nature – more specifically, a six-and-a-half minute satanic-jazz-prog piece featuring a sinister styled vocal from Nad Sylvan and contributions from violin/ violist Christine Townsend and saxophonist Rob Townsend.

Back to back long-form numbers of 'Held in the Shadows' and 'Shanghai to Samarkand' make for a collectively powerful mid-alum highlight.

The former, which mixes impacting, mid-tempo dark rock with passages that hearken back to early Genesis, features Steve Hackett’s strongest vocal performance to date (teamed latterly with, again, the wonderful voice of Amanda Lehmann).
The latter is a primarily instrumental, atmospheric Asian journey in the company of Steve Hackett and a cast of notable travelling companions including Christine Townsend (violin), Phil Ehart (drums), Roger King’s orchestral arrangement and Malik Mansurov and Ubaidulloev Sodirkhon Saydulloevich on the ancient stringed instruments, tar and dutar, respectively.

The mid-tempo muscle of 'Fox’s Tango' allows Steve Hackett to let rip musically (with some wicked guitar play) and lyrically (a protest song against life’s imbalances and inequalities) before another Hackett-Lehmann harmonised duet, 'Day of the Dead,' takes centre after-life stage.
(The pacier second half of the number, which mixes rock boogie with quirky, pseudo horn-pipe, could have been sub-titled Dance of the Dead).

Penultimate track 'Scorched Earth' is perhaps best described as a six-minute lullaby, or mournful ballad, for the planet.
There are countless heal the world songs of course (but that in itself tells a story) but few so striking in their melancholic beauty, here featuring crying guitar notes from Steve Hackett that do everything but run down the neck of the guitar and form a pool of tears at his feet.
Offering hope however, in literal title and delightful acoustic expressiveness, is short sign-off coda piece, 'Esperanza' (which would also have been a lovely fit on Under a Mediterranean Sky).

While this eleven track, near hour album follows in the musical soundscapes and rhythmical footsteps of its three all-electric predecessors, this time around the edges are more extreme – from a fully unfettered Steve Hackett with six-string blazing (escaping from the frustrations of lockdown and crying out against continuing humanitarian and social injustices) to the harmonic pop of 'Wingbeats' and the delicate poignancy of 'Scorched Earth.'

Click here for FabricationsHQ's review of Innocence and Illusion.