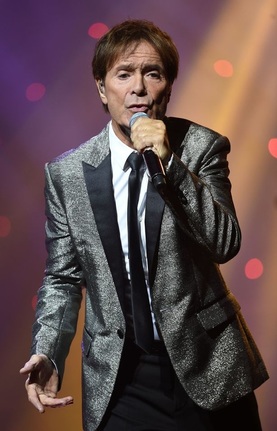 On October 14th 2010 Sir Cliff Richard celebrated his 70th birthday.
​
The singer celebrated in style. During his birthday week he performed six sold-out shows at the Royal Albert Hall and released the album Bold as Brass, a collection of classic light jazz and swing covers.

But the septuagenarian, once known as Peter Pan of Pop, was also starting to show his age.
But it took him bloody long enough.

And even although Britain’s biggest ever and most successful music artist is still recording and performing, it’s time for a Muirsical Reflection on the singer who brought rock and roll to the teen masses in the late 50s, much as Elvis Presley brought it to the world a couple of years earlier.

Harry Webb (as he was born) has said many times there wouldn’t have been a Cliff Richard if not for Elvis Presley and his first half dozen musical years were certainly similar – young rock and roll singer and pop balladeer, starred in light-hearted musical movies, had the "smouldering good looks" as they were described and an audience base that was predominately female – a trend that continued for the perennial Bachelor Boy.

His early musical career, most of it shared with the band The Shadows, was highly significant in British rock and roll history (and Shadows guitarist Hank Marvin was an influence on, and favourite of, many later six-string stars such as Peter Frampton and Gary Moore).
Those first half dozen years or so are, for many, Cliff Richard's defining period.

But you don’t survive fifty plus years in the music business without reinventing yourself and after an under-the-radar decade from the mid 60s to the mid 70s, when his lame middle-of-the-road pop was left standing by the Beatles explosion and changing fashions, Cliff Richard resurfaced in 1976 a very different performer.

The signs were there at the end of 1974 when the understated soft-pop of 31st of February Street saw release.
It was a pretty good little album but it failed to chart; other than the hard-core Cliff fans, no one was listening any more.
But that all changed just over a year later...

Bruce Welch, Hank Marvin’s six-string partner in The Shadows was also a record producer and helped reinvent Cliff Richard for what became a decade long dominance as the UK’s best melodic rock performer, comparable to the American AOR and soft rock acts of the same era.

Deciding he should be labelled a rock artist as opposed to a pop singer, Welch and others around him convinced Richard to make more serious records and pick only the very best songs available, some of which were later written for him or with him in mind.

The first album to come from this re-launch was titled, rather tongue-in-cheek, I’m Nearly Famous.
To this day that 1976 album is regarded as one of his finest records and arguably his best ever.
It produced two huge but very different styled hits – the haunting ballad 'Miss You Nights' and the rock edged ‘Devil Woman.’
Over the next eleven years Cliff Richard released ten studio albums that solidified his status as a serious hard pop/ light melodic rock artist; it became his most successful recording period, other than the original rock and roll years.
The melodic rock phase ended in 1987 with Always Guaranteed, although it's an album that is probably better labelled as soft rock.

Stronger, released in 1989, was another successful album but the winds of musical change were heard on that release.
In a classic case of "if you can’t beat them join them" Cliff Richard succumbed to the manufactured Stock Aitken Waterman (SAW) production sound; a number of the songs (including the SAW penned hit 'Just Don't Have the Heart') sat firmly in the synth-pop camp that was raising its flag as the 80s ended.

Just as 31st of February Street had been a transitional album, Stronger now played the same role a decade and a half later as the next phase of Cliff Richard's career got under way.

Cliff Richard’s soft and melodic rock period produced great album after great album, hit after hit.
There were also two live albums released in that time, Thank You Very Much (compiling the best of his 1978 reunion shows with The Shadows) and Dressed for the Occasion featuring the Royal Philharmonic Orchestra.

The hard rock highlight from this period was the 1979 album Rock ‘n’ Roll Juvenile.
Cliff Richard wanted to make an "energy packed" rock and roll record and it's fair to say he succeeded – it was the heaviest album he ever recorded, although it’s all relative.
No Cliff Richard album will ever out-rock the Scorpions for example, but Rock ‘n’ Roll Juvenile would be in many a rock fans collection if not for the fact they probably haven’t heard it or shied away from it because the name on the cover was Cliff Richard.

While Rock 'n' Roll Juvenile featured it's fair share of outstanding hard melodic rock tracks including the somewhat autobiographical title track and the hit single 'Hot Shot,' 1982's Now You See Me… Now You Don’t was weighted heavily towards gospel rock (Cliff Richard had become an active Christian in 1964).

Usually regarded as one of the ten mainstream Cliff Richard albums from this period, Now You See Me... successfully mixed rock, pop, gospel and ballad and was another strong release (Richard did record a full gospel album during this era, Small Corners, in 1978).

1983 saw the release of Silver, Cliff Richard’s 25th Anniversary album.
The limited edition version of Silver included the bonus record Rock ‘n’ Roll Silver; the latter was primarily a covers album that included a re-recording of ‘Move It,’ celebrating the singer's rock and roll beginnings.

1976 to 1987 wasn’t just Cliff Richard's best era musically; it may well have been his best years vocally.

Cliff Richard’s voice matured with age and between the singer's mid 30s and late 40s was perhaps at its peak, although that may have been something to do with the exceptional quality of the songs he was recording and how well they suited his voice.
He could also effortlessly slip into a falsetto to give another dimension to his voice, perhaps best exemplified on the "we don’t talk!" highs incorporated in his biggest hit of that era, 1979's 'We Don’t Talk Any More.'

Thirty years on and Sir Cliff the septuagenarian still has a voice but it’s a thinner delivery these days, albeit still with that distinct tonality and trademark slow vibrato.
He may not, vocally, have the richness of other, elder vocal statesmen such as Tony Bennett (who continues to defy the vocal odds) but such is Cliff Richard’s love of performance and love of singing it’s hard not to conceive of him still performing when he’s in his 80s, just as Bennett has done.

Polished singer, but not the most prolific song writer. But then he’s never had to be.
And it’s not as if he hasn’t written the odd gem or two...
'Rock ‘n’ Roll Juvenile' was written by Cliff Richard as was 'La Gonave,' the stand-out track from The Rock Connection.
That album, released in 1984, was a mix of rock and roll tracks (including some from Rock ‘n’ Roll Silver) and contemporary melodic rock numbers.
If any popular rock band had written and recorded 'La Gonave' we’d still be talking about it now.

Great Cliff Richard song that it is, it’s not his best.
That award, certainly in relation to his rockier or up-tempo numbers, goes to 'Cos I Love that Rock ‘n’ Roll' written by Alan Tarney.
Tarney was a major song writer and producer for Cliff Richard in the 1980s and that song's lyrics are more relevant now than when first sung by Richard on the Wired For Sound album in 1981...

Cliff Richard has been ridiculed many times, for many reasons:
His faceless middle of the road pop, speculation over his sexuality and his habit of using his position to promote Christianity.

Cliff Richard however, probably cares not a jot:
He has set countless records and his record count isn't too shabby.
As he turned 70, he had sold more than 150 million singles and 250 million records worldwide.

The audio tracks are presented to accompany the above article and to promote the work of the artist.
No infringement of copyright is intended.