Black Lakes – For All We’ve Left Behind 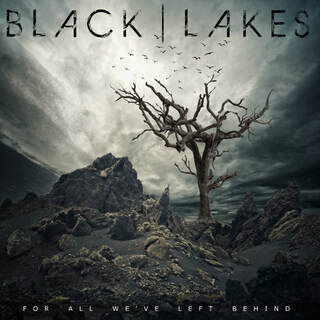 Welsh sextet Black Lakes are described as alt-rock/
alt-metal but on debut album All We’ve Left Behind there is a definite nu-metal lineage, with influences from bands such as Linkin Park and Hoobastank (along with traces of Muse).
​
There are soaring choruses, very well delivered vocals by Will Preston, savage triple guitar assaults (and some inventive riffing) from Dylan Burris, James Rowlands & Scott Bradshaw and some excellent rhythm section work from drummer Dafydd Fuller and bassist Lee Harris, who skilfully holds down the bottom end.

Opener 'Exordium' (Latin for "beginning") is currently the band’s intro music in a live setting.
An unsettling piece of lo-fi electronica (complete with vinyl scratches), 'Exordium' is not representative of the band but it does pave the way for the pile-driving 'Avarice,' a slice of unrelenting heavy riffing that also nods to "Bonzo" Bonham in the early going.
A song that needs to be turned up loud to revel in the twists and turns of the razor-sharp triple riffing (and an equally sharp, angry lyric decrying extreme greed and material gain), 'Avarice' should appeal to fans of both contemporary/ nu-metal and old school metal.

The lyrically defiant 'Dissident' offers both light and shade, including an eastern-flavoured intro from which we get a brief section of Rammstein style riffing interspersed with a U2 flavoured bridge and chorus section.
It shouldn’t work, but it most certainly does.

'Fragments' lulls you into a false sense of security with a reflective chord sequence introduction before exploding into a detuned riff-athon. A higher tempo then kicks in, alternating with a detuned half-time chorus that asks "Have we lost control? Was it ours at all? ‘We’ve been lying to ourselves.” A true album highlight.

Following number 'Verity in Flames' features some great use of dynamics before building toward a memorable chorus. These guys can metal hammer it out but are no one music-trick Welsh ponies (a few minus points however for the implementation of "death growl" vocals, which are both detracting and unnecessary).

'The Divide' is another with contemplative light and heavy riff shade, as well as a rare guitar solo part near the beginning (solos are included as colouration rather than a feature; a refreshing change).
Lyrically the song deals with trying to come to terms with lies being fed, a narrative you know to be wrong and forgiveness for such (albeit many of us will never be able to offer the latter).

'Landslide,' a nu-metal cry of anguish, is one of the band’s earliest songs.
Four years in gestation, the lyrics were inspired by the tragic events that took place in Aberfan in 1966, where 144 people (116 of them children) lost their lives due to a colliery spoil tip landslide.

'Ghosts (Of Our Memories)' evokes early era Queensrÿche and is another good example of the band’s collective ability in allowing a song to breathe in the ebb and flow of verse-to-chorus transitions.
The song also includes an attention grabbing harmony guitar & riffing middle 8 section.
'Deathrone' opens with an interesting chord sequence that transforms into another staccato riff verse and soaring, Muse-esque chorus. Will Preston delivers a bravura vocal performance (lyrically disparaging the pursuit of power and possession in a finite world) in the face of healthy competition from the rhythm section and triumvirate of riffing guitars.

The melancholic 'Break the Silence' (with intermittent full-on riffing for song emphasis) is, as the title suggests, about sharing experiences of loss or loneliness.
Written pre-pandemic and based on an unpleasant experience suffered by Will Preston, the song has since taken on a new lease of lockdown life.

Lyrically, the title track follows the theme of 'Break the Silence.'
A dark and melancholic slow burn, 'For All We’ve Left Behind' builds to a more optimistic finale amidst a crescendo of crunching power chords.
Predictable in soundscape perhaps, but delivered with genuine passion.

Final number 'Black Days Come' is described as "the secret track" for good reason – a departure from the rest of the album, it mixes bleak, brooding and bluesy undertones with subdued Alice Cooper menace before delivering a brighter chorus and uplifting middle 8.

For All We’ve Left Behind is an impressive debut of twelve songs (none of which outstay their welcome; no track over five minutes long) with equally impressive production values (courtesy of Romesh Dodangoda).

Black Lakes are also a very promising band; time and future musical endeavours will tell but on this showing they may, potentially, become the best bludgeoning riff band to hail from Wales since Budgie.
(RIP Burke Shelley, 1950-2022).

For All We’ve Left Behind will be released on 22nd February.  Pre-order here: https://blacklakes.bigcartel.com/