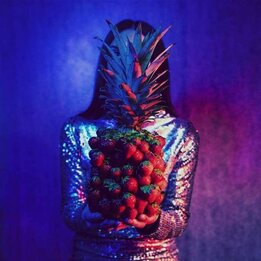 If your listening includes off-the-wall and (largely) instrumental music with an unsettling dark edge then NYC based guitarist, singer and award-winning composer Jane Getter, here in her Premonition band guise, is the musical gal for you.

Similarly, there's a satisfying complexity to Jane Getter’s compositions, with the six vocal tracks (a minimalist approach, with limited number of lines/ verses) tying in with the aforementioned King Crimson sensibilities (reminding in particular of Adrian Belew-era Crimson).

Opener 'Kryptone' is an instrumental with an unsettling alien feel to it; there are also some effective dynamics at play here and some innovative production techniques.
Mid-song, when Jane Getter trades solos with Adam Holzman’s synth, there are clear signs of Mahavishnu Orchestra influences and, again, King Crimson (further highlighted by the use of mellotron).

Following number 'Lessons Learned' ups the ante with its unusual chord structure and vocal parts (a comparison of sorts would be with the vocal numbers in the Alan Holdsworth canon, such as 'Road Games').
A stand-out track, 'Lessons Learned' progresses from the opening vocal sections to an altogether heavier part before dropping to a short acoustic section, then organ solo, before returning to the main vocal melody.
'​Dissembler,' featuring Randy McStine on vocals, is slightly more straightforward, albeit the clever use of dissonance, rarely used chords and continuation of that unsettling/ ominous feel means it won’t be troubling mainstream playlists anytime soon (the minimalist vocals/ lyrics approach is underlined by the fact they don’t make an appearance until two minutes in to this six-minute number).
Parts of the song’s arrangements are also reminiscent of Scandinavian guitar genius Matthias Eklund (with the ghost of Holdsworth’s vocal numbers in there as well), before Jane Getter cuts loose on a shredding solo towards the end.

'Alien Refugee' does not continue the unsettling feel you would expect from the title; instead it is a slower, more traditional number that is almost new age folk in places.
An unexpected but rewarding diversion, Jane Getter delivers a restrained solo over a simple backing of organ, bass and drums which add to the retro feel.
Special mention too for the shared vocal performances of Getter and Randy McStine.

'Still Here' is one of the tracks that recalls Belew-era King Crimson as well as post-Testament Alex Skolnick with instrumental band Ohm (it’s therefore no surprise this is one of the three songs Skolnick features on).
The Getter-Skolnick solo-trading section is very Zappa-esque (no bad thing) but the number slightly over-stays its welcome at over six-and-half minutes (the longest song on the nine track, 45 minute album).

'Answers,' featuring singer Chandra Rule, carries a folksy feel through its instrumentation, arrangement and vocal melody parts.
Another strong number, 'Answers' builds toward an epic ending with piano, organ and mellotron in full cry before returning suddenly to the acoustic guitar of the opening.

Instrumental 'Queen of Spies' features a Mahavishnu styled intro before developing with riffier/ heavier sections; Jane Getter delivers another top solo while showing her compositional skills and sense of dynamics (the ebb and flow of this number is both impressive and appealing).

The melancholic 'Disappear' is a musically delicate number that lyrically covers loss in a sensitive manner.
A deceptively deep song, 'Disappear' also benefits from a very impressive Moog solo.

Jane Getter then surprises and delights with a short solo acoustic piece entitled 'Safe House' to close out the album.

Don’t expect an out-and-out guitar heroine album here; Jane Getter’s compositional skills are to the fore and more than equal to her guitar playing – she has also been clever enough to surround herself with a team of top-notch players and a production (from Adam Holzman and Getter) that delivers in spades.

Make no mistake, although there is a retro feel to some of the material this is modern and adventurous progressive rock, housed within an album that is well-named:
Anomalia (feminine noun) - irregularity, anomaly; something that is different from normal.