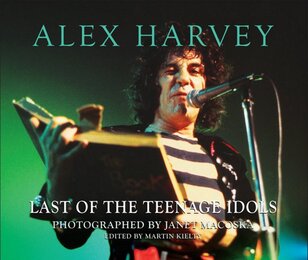 In early 2012 a limited edition photobook charting and commemorating the life of Alex Harvey was made available.

Alex Harvey: Last of The Teenage Idols (which includes never before seen on and off-stage pictures) is a collaborative work between photographer Janet Macoska and journalist Martin Kielty.
It was made available on the 4th February 2012, exactly 30 years on from the Scottish singer's passing.

Previewing the deluxe hardback book and looking at some of the images brought back just how much Alex Harvey’s presence is missed in the world of rock.

Alexander James Harvey was never destined to be the greatest singer in the world but he was a true showman and a true original; a charismatic and captivating front man.
They broke the rock mould when Alex Harvey was born and he was certainly born to be on a stage.

For most rock fans memories of Alex Harvey are the successful years of the 1970’s – specifically the Sensational Alex Harvey Band and their live shows and album output between 1972 and 1978.

Hard to categorize, their music, style and arrangements covered many forms of rock and were almost theatrical in performance.
And Alex Harvey, in his black and (sometimes discoloured) white hooped top, unruly mop of dark hair and gap-toothed smile, had the ability to be visually (and vocally) charming, cheeky or chilling.
Sometimes all three. And sometimes within the same SAHB song.

Alex Harvey had quite the career before the success with SAHB.
The Glaswegian was 22 years old when rock and roll started to make waves in Britain; in 1957 he entered, and won, a competition to find "Scotland’s Tommy Steele" (Steele had become Britain’s first rock and roll teen idol the year before with his hit 'Rock With the Caveman,' beating Cliff Richard to the rock and roll punch by two years).

Alex Harvey then put together an interesting and notable musical apprenticeship, which included appearing on the same bill as The Beatles when they toured Scotland in 1960.
Harvey later played Hamburg and its famous club scene with his group Alex Harvey and His Soul Band; by 1967 Harvey was based in London and performing in the musical Hair.

There were a number of Soul Band or Alex Harvey solo albums in this period but as the rock 'n' soul and later psychedelic pop of the 60s became the grittier rock-orientated 70s Alex Harvey was off looking for the next musical adventure.
And, as it turned out, that next adventure was waiting in the wings of the Marquee Club in London where a young band was supporting the older Harvey...

Tear Gas were a Glasgow based rock band featuring the talents of Zal Cleminson (guitars), Chris Glen (bass), and the cousins Ted and Hugh McKenna (on drums and keyboards respectively).
When Alex Harvey joined as lead vocalist and immodestly renamed them the Sensational Alex Harvey Band, a truly innovative and very different type of rock group was born.

Between 1972 and 1978 the Sensational Alex Harvey Band (more commonly known as SAHB) released seven studio albums full of diverse, quirky and sometimes progressive rock music – the classic Live album (recorded at the Hammersmith Odeon in London) helped capture what SAHB were all about in their natural on stage environment.

More recently a number of anthologies, archive live releases and a CD issue for the originally shelved 1974 album Hot City have helped keep the all too short SAHB legacy alive.

But the songs and studio albums were only part of the SAHB story – you really did have to see them to appreciate them, whether watching the band perform hits like 'Boston Tea Party' on Top of the Pops or in attendance at one of their gigs.

Alex Harvey wasn’t the only focal point with his look and presence.
The other band members dressed to glam without ever being gaudy while Zal Cleminson usually dressed in green and wore white face make-up, making him a cross between Pierrot the sad clown and The Joker.

One of my most vivid memories of rock music’s most vibrant and creative decade is the SAHB performance of 'Delilah' on The Old Grey Whistle Test in May 1975.
The song was made famous by, and became hugely successful for, Tom Jones, but in live performance SAHB pretty much owned it.
'Delilah' became the band's biggest hit and the choreographed dance routine (for want of a better phrase) from Chris Glen and Zal Cleminson during the instrumental bridge is a once seen, never forgotten moment.

SAHB's cover of 'Delilah' leads to an interesting an unarguable point – for all the diverse and unforgettable originals (such as the pulsating 'Faith Healer,' the proto-punk 'Vambo' and the dance hall swing of 'Sergeant Fury') the band's covers made just as much of an impact.

From Leiber and Stoller’s 'Framed' (also performed by Alex Harvey during his Soul Band days) to the vaudevillian tango arrangement of Jacques Brel’s 'Next,' they all carried that SAHB stamp.
Harvey would also revisit his rock and roll roots from time to time; the rollicking version of the Bellboys 'Giddy Up A Ding Dong' is a great example.

"Good evening boys and girls..." live, Alex Harvey could be be cheeky, charming or chilling.
Next, the band's second album, defines SAHB and Alex Harvey better than any other.

On the subject of covers, I have always maintained there are two groups of rock fans in the world.
Those that have heard Alex Harvey’s very Scottish introduction to SAHB’s version of Alice Cooper's 'School’s Out' and those that haven’t.

SAHB’s final album, Rock Drill, was released early in 1978 but Alex Harvey knew he was calling it a day by the end of 1977.
That was an interesting year in itself for Harvey and SAHB, but as separate recording artists (although the last ever SAHB show was a headlining appearance at that year's Reading Festival).
While Alex Harvey worked on a project that became the spoken word / investigative album Alex Harvey Presents: The Loch Ness Monster (which, like Nessie herself, disappeared quickly after making hardly a splash) SAHB recorded the album Fourplay.

Credited to SAHB (Without Alex), Fourplay took its lead from the American soft-rock of the time; most critics recall the most memorable thing about the album being the back cover picture of a bound and gagged Alex Harvey.

A little harsh, but Fourplay and the Nessie narrative did prove that Alex Harvey and SAHB were stronger together than apart.
Alex Harvey went on to work and tour with other musicians and released two solo albums after SAHB, but it was a case of diminishing musical returns.
That said, his final album, the posthumously released Soldier on the Wall, deserved a far larger audience than its troubled distribution originally provided for (it eventually saw CD release in 2003).

Sadly and tragically Alex Harvey died from a heart attack in 1982, shortly after performing a show in Belgium with his new band the Electric Cowboys; he was one day short of his 47th birthday.

Thirty years on however we still have the songs and albums of Alex Harvey and now there is the striking and memorable imagery contained within Last of The Teenage Idols.

Priced at £45 the book is not overly cheap, but it’s a true collector’s piece (limited to 1000 copies worldwide) and is quite the memento of the mercurial singer’s life and career.

And for the book's creators, there’s personal sentiment.

Photographer Janet Macoska owes Alex Harvey an employment debt of gratitude; her first paying photography job in rock and roll came courtesy of Harvey and it’s fair to say she hasn’t looked back.
Janet went on to work with the Rock and Roll Hall of Fame Museum in Cleveland; her images have featured in various publications from Rolling Stone to Vogue and in album artwork by artists including Led Zeppelin, David Bowie, the Clash and AC/DC.

Glasgow journalist Martin Kielty wrote SAHB Story, the authorised biography of the Sensational Alex Harvey Band, in 2004.
Martin went on to manage SAHB when they reformed that same year to perform with guest vocalists and later with singer Max Maxwell.

Ross Muir
February 2012
For more information on the photobook Last of The Teenage Idols and ordering:
http://www.blurb.co.uk/b/2931042-alex-harvey-last-of-the-teenage-idols