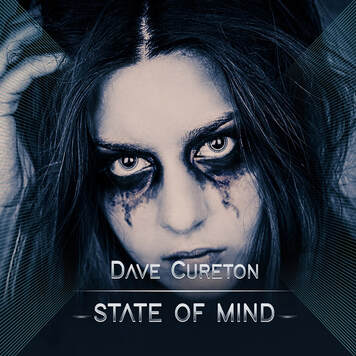 And if that be a genre that floats your musical boat then jump aboard, because there is some serious playing, and serious players, involved.

Opener ‘Psycho-Tronic’ (which features a short, distorted vocal section) sits firmly in Joe Satriani territory complete with strong melody, use of pitch shifter whammy pedal and legato sections.
By the time we get to the solo (suitably building to a crescendo) it’s noticeable that talented bassist William Kopecky and renowned drummer Marco Minnemann are not mere sidemen on this project – both contribute interesting and innovative rhythm parts.

Following number ‘Puppets Dream’ is more downtempo and reflective. There are clear hints of Satriani again, and Steve Vai, but it’s difficult to escape such comparisons as both cast a substantial and influential shadow.
Dave Cureton does however add his own take on the genre, coming as he does from a more prog-rock background with IO Earth.
An interesting and tasteful inclusion on this number are the operatic female vocals, which fit the mood well. William Kopecky adds some excellent fretless bass and Dave Cureton drives the song to a conclusion with a soaring solo (Cureton’s IO Earth band-mate, keyboard player Adam Gough, who co-produced the album with Cureton, adds atmospheric texture).

'Set You Free' is altogether more unsettling with its use of dissonance and unusual time signatures, which suggest an off-kilter influence of Marco Minnemann from his day-job duties with fellow virtuosos Guthrie Govan and Bryan Beller in the Aristocrats.
‘Free Falling’, which follows, is a more accessible piece with another strong melody, great light and shade and more excellent fretless work from William Kopecky.

'Sound of the Sun’ has an Eastern influence, as emphasised by the return of female vocals this time with an Asian feel. Dave Cureton contributes a tasty wah-wah solo when the number drops to half-time, building it skilfully towards the song’s heavier conclusion while Marco Minnemann drives it forward in a Dream Theater fashion. An album highlight.

‘Flow Motion’ initially drops the intensity, with William Kopecky setting the tone with more high register fretless bass. The song has an epic marching feel to it and while the influence of Joe Satriani is writ large (Cureton’s tone / sound unashamedly veers into Vai & Satch territory every now and then) there’s also a hint of Mike Oldfield in the structure and melodic references.
An ambitious number, 'Flow Motion' betrays Cureton’s symphonic prog rock background...
'Flames’ is an appealing amalgamation of Floyd, Vai & Zappa with some clever key changes and chromatic sections. You really have to be able to play to pull off something like this and Messrs Cureton, Minnemann and Kopecky surely can. Another album highlight.

'Killer Fusion,’ while feisty enough, doesn’t live up to its name, being more of a Vai meets Satch splicing complete with rocky riffing and wah-wah on the melody and solo (the swingin’ finale, featuring Steve Trigg (trumpet) and IO Earth band-mate Luke Shingler (saxophone) is a nice touch however).

Contrastingly ‘The Secret Lullaby’ does live up to its name.
Introduced by heavily reverbed acoustic and female vocals, the piece progresses towards a lovely melody (there are little hints of Steve Vai’s ‘For the Love of God’ but that's pretty good company and no bad thing).
Some lovely fretless work from William Kopecky elevates the song further while Adam Gough’s orchestration keys provide effective support (as is the case throughout the album).
Dave Cureton wigs out towards the end of this number with some high register soloing before the song returns to its gentler origin. Truly great stuff.

Near seven-minute closer ‘Evolution’ is a rocker at heart but it also contains a contrasting melody part supported by sparse bass and keyboard parts. The number is a fair reflection or summation of what has gone before without ever reaching the heights of the album’s highlights.

Outside of the aforementioned Joe Satriani and Steve Vai (and the likes of Eric Johnson and Andy Timmons), wider success in instrumental rock guitar land is difficult to achieve, given its narrower confines.
But should Dave Cureton decide to pursue this path in tandem with IO Earth, he could well become a serious contender, once he finds his own voice.