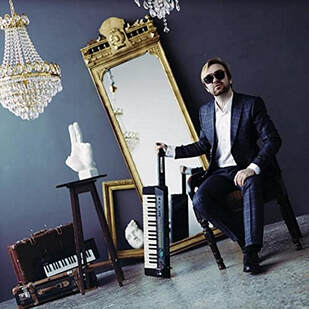 As the album title tells you, this is multi-instrumentalist and composer Valeriy Stepanov’s second Fusion Project album, following as it does the seriously impressive Album No. 1 in 2018.

Prior to such fusion fuelled injections there was the cool, funky and highly accessible new wave jazz of 2017 solo album New Beginnings.

Indeed Valeriy Stepanov is, in the studio, very much a solo artist.
Aside from the extremely talented guest players this is a solo display of fusion delights – Stepanov plays all the synthesizers (and synth bass), electric guitar and most of the drums; he also recorded, mixed and mastered the album (the production is second to none).

The album kicks off with the impossibly funky 'Positivity,' featuring the Eastside Horns (Pavol Jeno - trumpet, Mario “Gapa” Garbera - tenor sax), who provide razor sharp counterpoint to the keys wizardry.
The jazz-tinged synth-piano solo demonstrates what a virtuoso Valeriy Stepanov actually is on his first instrument. After an effective key change the number returns to the original theme before the outro, featuring some impressive licks traded between Jeno & Garbera.
Crazy 'Bout U maintains the funk elements but with a Moog part taking over the melody parts and saxophone (from Andrey Chmut) in a more supporting role.
Chmut’s also contributes a stunning sax solo before a key change into a Hammond-esque solo returns the song to the theme, after a dazzling drum break (from Calvin Rodgers) over a rhythmic ostinato.

The ten-minute 'Sarma' drops the intensity initially with repeating keyboard chords, before frenetic drum and sequencer parts up the tempo.
Something of a fusion / funk mashup, the piece then gives way to a reflective breakdown before the frenetic drum part resumes in tandem with a virtuoso synth solo that cascades and ascends with ease.
The intensity is dropped again with a bass solo from the brilliant Junior Braguinha, before building towards a frenetic conclusion and drum solo from the equally brilliant Gergő Borlai.

'Away' is far more relaxed and groove driven, with an excellent bass guitar part providing the rhythmic backbone. Female vocals add to the laid back feel.
The bass part then simplifies to accompany yet another exemplary keys solo, this time with a Rhodes type sound, before the number plays out on a funk groove.

The near eleven-minute 'Long For You' is a lovely, restrained number with a delightful and atmospheric piano intro, followed by vocals (without words) as an accompaniment.
There is a danger of verging into lounge-jazz mid-song but the focus is firmly on the beautiful piano parts, followed by a wonderfully expressive end section built on a crescendo of synth parts (and softer finale).

Another long-form number. 'New Life.' includes an interesting 7/4 introduction before settling into a minimalist funk groove; said funk quotient is then increased with the addition of a clavinet before settling into a full-on groove with a keys/horn part reminiscent of 70s era Stevie Wonder (no bad thing #1).
The number then drops to a heavily reverbed solo electric piano before keys, bass and drum part accompany another wondrous solo (Valeriy Stepanov doesn’t just impress with technique – he has musicality and emotion running through his solos). A true album highlight among many.

After the keyboard reverb chords of vignette piece 'Arshan' the up-tempo funk and guitar, synth keys and piano jazz of 'On The Stork’s Wings' flies on the fusion equivalent of its title.
It then floats high, and out, on a ridiculously good and expressively melodic guitar solo from the stellar six-string fingers of Alex Hutchings.

'The Longest Day Ever' is preceded by a lovely solo piano piece, abetted by strings, which shifts keys effortlessly. The inclusion of the vocal parts on this occasion veer away from any lounge-jazz dangers and more towards Pat Metheny territory (no bad thing #2).
A restrained and quietly understated moog-type solo then plays over the key changes and bossa-nova type groove. Lovely stuff.

'Believe in Yourself' is one of those up-tempo/ feel-good numbers of which Valeriy Stepanov excels.
He is ably accompanied here by saxophone maestro Eric Marienthal, which evokes the Chick Corea Elektric Band (there are very few who could step into Corea’s shoes, but Stepanov is certainly one of them).
Marienthal duly delivers a sax solo of grace and poise, elevating the piece even further, before the number closes out with another impressive Stepanov piano solo.

Valeriy Stepanov and all the contributing guest players are top level, world class musicians – but by its very jazz/ fusion nature not everyone will appreciate this album (there are also times where Stepanov is a bit too eager to impress and dazzle with technique).

However there are many moments of true, musical masterclass to be heard on Album No.2, led by the compositional and instrumentation skills of one of the finest musicians in the new wave of jazz/ fusion.


Listen to, stream or purchase Album No. 2 at: https://song.link/vsfp_album2