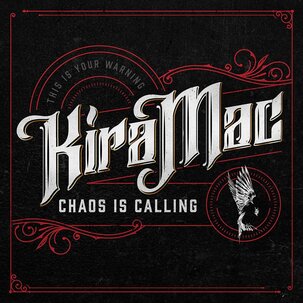 There’s never any shortage of over-hyped up & comers on the New Wave of Classic Rock radar, those that fail to deliver on early "ones to watch" declarations or don’t make the impact expected after a flurry of heavily touted singles or an attention grabbing EP.

Then there’s the exception to the flatter to musically deceive rule, such as debut album Chaos Is Calling by contemporary rock outfit Kira Mac, named after their striking and statuesque front gal (aka Rhiannon Hill), who can add some bluesy sass to her no nonsense rock voice as and when required.

However Kira Mac are also very much a band in both name and musical delivery, featuring the aforementioned front gal, guitarists Joe Worrall and Alex Novakovic, bassist Bret Barnes and drummer Max Rhead (Cal Casey is behind the kit on the album).

Interestingly, Kira Mac’s chaos has been calling for quite a while.
The album started its song-writing gestation period back in 2015 when Kira Mac first met Joe Wirrall; more recently the four singles lifted from the album all pointed to a full-length debut that could well be worth that seven years wait – and it pretty much is.

The big, bold, brash and southern styled swagger of 'One Way Ticket' carries such modern, heavy blues rock weight that more established contemporary rock/ metal acts, such as Black Stone Cherry or Halestorm (the most obvious comparison), will be disappointed they didn’t come up with it first.

Following number, the fast-paced and rock punky 'Hit Me Again', is all snarly riff and JD double-shots with a full-on harmony backed chorus; the title track then showcases the band at their most contemporary, certainly in sharp edged, rock-metal terms.

'Back For More' keeps up the intensity with its rock verses and heavy-pop chorus embellishments; there’s also a hint of Joan Jett here, a comparison that’s accentuated by a lyric that’s a variation on the ‘Hate Myself For Loving You’ theme and a fairly simple, big beat rhythm.

'Imagine What We Could’ve Been,' a thick guitars number with plenty of punch and another harmonies and hard-pop chorus (something of a Kira Mac trait), has a sassy vocal that fits the ‘it's your loss’ styled lyricism.
Clocking in at under three minutes, the song also epitomises the album’s short, sharp and therefore more effective approach (the ten songs average out at three-and-a-half minutes a pop, with no number straying over four minutes).

The band then get their rocked-up and southern-tinged blues on for the mid-tempo muscle of 'Mississippi Swinging' (one of four singles that achieved A-listed airplay from Planet Rock) and the darker, stomp-affected 'Hellfire & Holy Water' (think Elles Bailey with amps to 11 and a bottle of Johnnie Walker Black Label).
Both numbers are highlights of the album.
The pounding rock-metal of 'Downfall' is another Halestorm would love to call their own (Kira Mac gives it the full Lizzy Hale on this 'un), while 'Never Going to Stay' is perhaps as close as the band get to (highly contemporary) melodic rock or hard-pop; it also provides contrast and nice counter-point to the preceding number and, indeed, the heavier core of the album.

That heaviness is re-emphasised on closing number 'Dead Man Walking', a slower and thick-riffed heavy rock-metal blues that separates itself from the crowd by again employing a harmony-backed chorus arrangement (and another very impressive vocal from Kira Mac).

Four A-listed singles on Planet Rock; a session on the BBC Radio 2 Rock Show with Johnnie Walker; an impressive and well-received showing at the 2022 Steelhouse Festival (resulting in a return invite for 2023).
And now an equally impressive self-released debut album.

Chaos is calling right now but if Kira Mac keep this up, it may well be that bigger success and wider recognition comes calling in the not too distant.

Digital / stream/ CD: https://slinky.to/chaosiscalling
Buy the album and related merch at: https://officialmerchandise.store/collections/kira-mac
Vinyl Edition (including limited edition red pressing) of the album is scheduled for release on 2nd June 2023