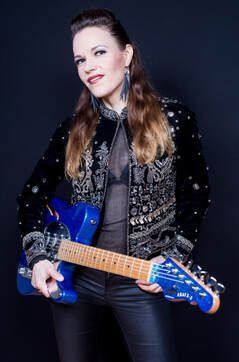 Following a clutch of dates in Canada in trio format, European Blues Award winning singer songwriter and slide guitarist Erja Lyytinen returned to the UK in March 2019 for twelve shows.

The acclaimed Finnish musician (who has been nominated for the second year in a row as Guitarist of the Year by the European Blues Awards) had also just announced the release of her new album, Another World.

Released in April on Erja Lyytinen’s own record label, Tuohi Records, Another World features guest guitarists' Sonny Landreth and Jennifer Batten, the single 'Another World' and, on the digital download version, earlier single 'Without You.'

Following her Canadian dates and during preparation for the UK shows Erja Lyytinen spoke to FabricationsHQ about the new album, love of live performance, the multi-styled musical influences that have produced such a stylistic take on blues and rock and her appearances on Finnish TV show, Tähdet Tähdet (Stars Stars)...
Ross Muir: You're making a welcome return to UK shores in support of Another World – looking forward to playing in the UK again?

Erja Lyytinen: I love touring in the UK. We have been coming there now for few years and we have many supportive fans and friends, so it feels great to always come back.
This tour will be the only UK tour this year, so we’re gonna make the best out of it!

RM: You also seem to really embrace the live environment and clearly love to play live...

EL: Yes, I feel lucky that I get to play music for people all around the world!
Last year we played one hundred and thirty shows around Europe, probably my busiest year so far.
We got to do some amazing shows – we started on New Year’s Eve at Square Market in Helsinki in front of eighty-five thousand people, then in April I played a show with Sonny Landreth in Switzerland.
In June we supported Santana in front of twenty thousand people; by the end of the year we had played all kinds of festivals and concerts in various countries.
​
Also, seeing other amazing bands and enjoying their music is very inspiring – for example, supporting Dutch progressive band Focus was great; I loved each musician’s virtuosity and it is so cool that the band has kept on going for decades. I hope to keep on touring as long as I possibly can!

RM: Can we expect songs from Another Worlds to feature in the live sets?

EL: We are planning to play new songs from the album, for sure.
After a very intense period in the studio, knowing each song – and every small detail in them – I am super thrilled to be playing the songs live. A live situation always shapes the songs a great deal, too.
On my previous Stolen Hearts album there was a ballad called 'Slowly Burning;' on the album it’s around four minutes long. Now, when playing live, it has expanded to over ten minutes with a long solo and an A cappella vocal part in interaction with the audience; it has developed into something completely new!

I also like to create a world around the songs by telling a story, and conveying that through an emotion.
If you can touch people with your performance, and they go home feeling refreshed, isn’t that the best thing, really, that art can do?
I have two of the world’s most wicked guitarists featuring on the album, Jennifer Batten and Sonny Landreth. The songs we played together will most certainly be added to the live set – I'll also get to play some songs with Jennifer when we do the Monstress Of Guitar Tour together in Finland in April.
I'm also planning to play some of the grittiest and funkiest tunes from Another World because they will definitely work great live!
RM: The singles released from Another World, 'Without You' and the title track, point to mix of contemporary blues rock and lyrically thought provoking melodic rock.
It sounds like the next step up from Stolen Hearts, which had rock, blues and melodic diversity…

EL: As the title suggests, the album is a step to another world, musically and spiritually.
After heart-breaking stories in Stolen Hearts, Another World is, in a way, stronger and more adventurous; it's more open to new and interesting things that the path will reveal as we walk on it.
In addition to blues, I have always listened to fusion jazz and progressive rock; with Another World I finally feel I can put everything that I’ve learned into my music – I also feel that as a guitarist I have developed and found my own voice and interpretation.

RM: The song 'Another World' had a very striking video to help with the lyric/ story-telling – lyrics are clearly as important to you as the music…

EL: I love telling stories… there’s always something true behind every lyric I write.
With 'Another World,' well, I just wish there was a parallel universe – that is a very fascinating thought!
That’s why I love lyric writing, you can go to a place that doesn’t exist – it’s kind of like playing games, it takes you to a different level.
In games, something out of this normal world can become possible and that will spice up your everyday life!
RM: ​I feel Live in London was almost acting as the end of one chapter and Stolen Hearts was the beginning of another, which continues with Another World.
Do you feel there is a shift and growth in your music stylistically, or in your guitar playing?

EL: Well, Live In London summed up my repertoire from my early years until the beginning of Stolen Hearts.
It started with traditional blues and jump-blues and on to my Elmore James tribute album, then finding my voice and going toward a more rocky, explorative style.
During these last two decades of I have also explored a lot more with guitar pedals and sounds – I use a lot of delays and modulation pedals as they change the whole vibe of what you’re doing with a guitar.

Occasionally when we do trio shows – like the ones we have just finished in Canada – it's interesting to be able to go crazy and move between delta blues, played with a clean sound, to a psychedelic "whammy hell" with big delay!
I have also been trying to practice some new licks and add a bit more speed and technique to my playing, as it’s nice to be able to create tension with speed. But I like to dwell in melodies too, and play without haste.

RM: All of which has seen you develop in to quite the consummate guitarist, with brilliant slide skills, the latter earning you the nickname "Queen of the Slide." Can you recall what first attracted you to slide playing? 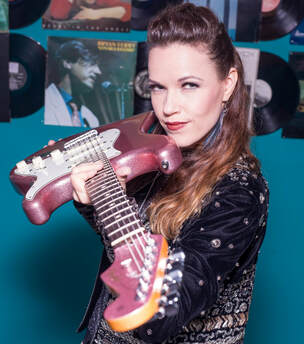 EL: When I was studying in Kuopio, someone left a slide in the class room. I picked it up, started to play guitar with it and fell in to it, right away.
I asked my former teacher to teach me a bit about slide, which he did – he gave me all the essential information but then I was on my own!
Later a friend of mine brought me an album called Home Plate by Bonnie Raitt and I learned her songs; little by little I began to learn other stuff.

When I met guitarist Davide Floreno, who played on all of my previous albums, my slide playing got a little more wind under its wings as he was very enthusiastic about it.
Over the years I have developed my own approach to slide playing – I love the fact that I never really got too much study for slide guitar; there are no fixed patterns, I simply play by ear.
It’s always fun, interesting, exciting and a mystical trip to pick up a slide!

RM: Whatever shape your music takes, blues is always a part of that musicality – you can hear or feel it in every album you record or song you perform – but you also have influences of jazz, pop, rock, a little country…

EL: I studied all kinds of music styles; now it’s all wrapped together and coming out through a blues filter!
I also listened to different bands and very different guitar greats like Jeff Beck, Pat Metheny, Eric Johnson, John Scofield, and how they use the melodies and harmony.
To combine all of that with blues makes it very interesting to me.
When I was a kid, I remember my mom listening to a lot of music, whether it was hard rock, blues or poppier stuff – Led Zeppelin, Deep Purple, The Beatles.
My mom was also a singer and would sing some of the golden jazz tunes in Finnish; that’s where I learned about vocal phrasing and melodies.

RM: That brings us nicely to your own singing voice and vocality, which was heard taking on very different song style genres on the highly popular Finnish music show Tähdet Tähdet, or Stars Stars.

EL: Stars Stars was an amazing experience! From the start I said to myself, "don’t limit yourself, have courage to be someone else and try whatever the TV company suggests." And I did!
One of the coolest songs to sing was the Serbian Eurovision song 'Molitva,' and learning to sing in Serbian.
Also, I remember when singing that song, it really took me to some other place, and I got this deep feeling while performing it... I can still remember that feeling.
Funnily enough, for me the hardest thing about that show was having to sing in Finnish! (laughs) – maybe because I am so used to singing in English and I’m always thinking in English these days, too!

RM: Two other stand-out Stars Stars performances from you were Heart's power ballad 'Alone' and the song we'll close out with, the Shirley Bassey/ James Bond classic, 'Diamonds Are Forever'...

EL: The two you just mentioned were my favourites and I really did my best on them.
I practiced a lot for those amazing songs because playing ninety minutes on stage is very different on comparison to just having two minutes on live TV, trying to nail it and win over all the voters!
There can be pressure that affects your performance but I think my heavy touring helped me to be very comfortable on stage; I’ve also been doing TV since I was twenty years old, so it felt quite okay.
That show was definitely a huge highlight for me and it opened so many doors – and I am using the things I learned from my performances on Stars Stars now!
Ross Muir
Q&A With Erja Lyytinen
March 2019
​
Another World is available on Tuohi Records and released in CD, Vinyl and Digital formats.