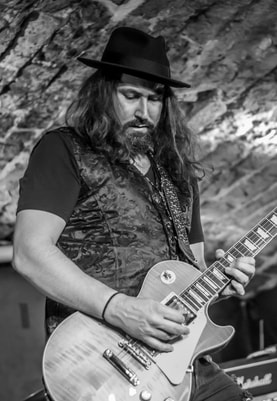 Given the current every penny counts climate (coupled with Covid still hanging about), a cold evening, midweek club gig is never an easy punt, regardless of the artist playing (which makes you feel all the more for the talented and gifted musicians who are out there doing what they were clearly meant to be doing).

A small (but dedicated) crowd is not always an easy thing for a band or musician to look out onto, but where others may find it hard to perform (or decide to just phone it in) Jack J Hutchinson and his band has no such issues.

Raucous blues rockin' roller, singer & guitarist Hutchinson, drummer Phil Wilson and bassist Charlie Rachel Kay played Bannermans in Edinburgh as part of their October/ November run of UK dates with every bit of the enthusiasm and professionalism they would if headlining a large blues festival.

Hitting the stage after the anticipated wait (no support acts this particular night) the Jack J Hutchinson Band didn't waste any time setting their heavy rock-blues stall out, opening with the title track of Hutchinson’s latest (and impressive) solo album The Hammer Falls.
​A punchy and lively number, it immediately got the crowd hooked in, making us all forget (or even care) this wasn't a sell-out show.

Following 'The Hammer Falls,' Jack J and band kept the energy and enjoyability high with a set list that helped promote, and showcase, the latest album (six songs from The Hammer Falls including the heavy and grungy 'Down By The River' and the punkier rock and roll of 'Halo').

The set was bolstered further by a similar amount of songs from Hutchinson’s two previous solo albums, 2019’s Who Feeds the Wolf? and 2017’s Paint No Fiction.
Given how strong the former was/ is, it was no surprise a quartet of Wolf numbers were aired, including the contemporary swagger of 'Justified' and the lighter contrast of moody ballad 'I Will Follow You.'
Paint No Fiction offered up the opening one-two salvo of that album, the short and rock-sharp 'Deal With the Devil' and the more downtempo (and slightly southern) 'Written in Stone.' 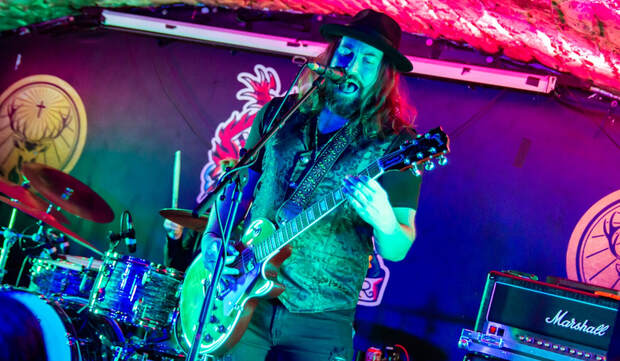 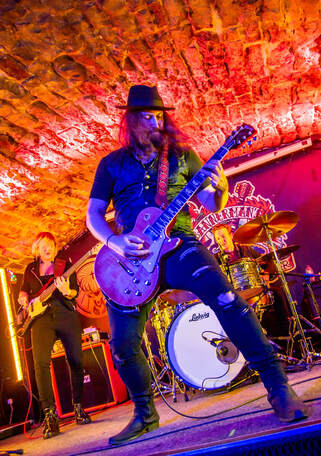 Between songs the trio all had great banter on stage, showing how well they gel together, and not just musically (add to this Jack J’s various little funny stories and you have a crowd who’s attention was held throughout).
The only (slight) negative on the night was the sound mix, with Phil Wilson’s drums a little too loud across not the entirety, but most of the gig (occasionally drowning out the vocals).
That said any audio balance gremlins weren’t enough of an issue to curtail anyone's enjoyment of what was a cracking gig.

​The set ended on the punky and punchy 'Days of Thunder,' the new song from current EP release What Doesn’t Kill You (the EP also features excellent (re)mixes of three The Hammer Falls numbers by renowned producer Kevin Shirley).

As consummate as Jack J Hutchinson is in the studio (as his last batch of albums can testify) he’s very much at home in the live environment; Hutchinson is a great guitarist who also carries plenty of emotion in his voice (with just the right spattering of vocal gravel where needed).

Could, and should, this have been a better attended gig?
Of course, but as mentioned right at the top of this review, this is simply the situation many a touring or gigging act currently finds themselves in.

Any and all who missed Jack J Hutchinson this time around or are considering whether to venture out to any his remaining 2022 gigs, I highly recommend you do yourself a favour, grab a ticket and let the Hammer Fall.
You will not be disappointed.