The Commoners – Find A Better Way 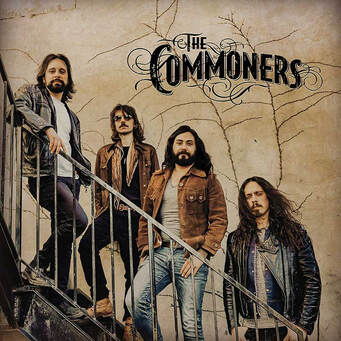 Roots-rock and soulfully southern quartet The Commoners, hailing from Toronto, proudly nod to the Black Crowes in their musical affections and influences (no bad thing, frankly).

That influence is heard to fine effect on the title and opening track of Find A Better Way, which is rich in down-home riffage, soul-swagger, groovin’ organ (from guest player Jeff Heisholt) and big backing vocal/  harmonies.
The latter is a true strength of what is an outstanding song and album, courtesy of Chantal Williams, Shezelle Weekes & Tash Lorayne who enhance and complement bassist Ben Spiller and drummer Adam Cannon’s own backing vocals.

Nor does it hurt that front man Chris Medhurst has the same sort of vocal approach and style as Chris Robinson – both are soaked in blues, soul, roots-rock and southern comfort (the music; I can’t speak for their drinks of choice).

But even within that one song (a clarion call to humanity to overcome the many and myriad challenges of the last few years), bolstered by a great mix from Kevin Shirley, the band’s own stylistic approach shines through.
The Commoners are a musical amalgam of the aforementioned 'Crowes, Derek Trucks and the Allman Brothers (self-evident influences and self-confessed favourites) and their own style, a loving mix of 70s vibe’d roots, blues and rock, a little country and a hint of gospel.

Following number 'Fill My Cup' is yet another highlight (truth be told every one of the nine songs makes an impact, both musically & lyrically).
Featuring organist Miles Evans-Branagh (who also contributes piano and Rhodes throughout) and switching from soulful blues verses to bigger, uplifting choruses (along with a downtempo middle 8 that leads to a big vocal finish) the dynamics of 'Fill My Cup' make for an out-and-out winner.

'More Than Mistakes' is the short ‘n’ rockin’ side of The Commoners (think a rootsy rock & soul, double-speed take of 'Mustang Sally'), which drops its tempo mid-song to allow lead guitarist Ross Hayes Citrullo to deliver a tasty if understated (less-is-more) solo.
Citrullo then gets to flex his six-string credentials in bigger and bolder (yet still melodic) fashion on 'Too Much,' a song that sports a wicked little riff, plenty of Black Crowes attitude, great backing vocals  and so much southern-fuelled swagger it should be illegal...
'Naturally' is the album’s slow-roots-blues moment; built upon a simple rhythm and beat, Chris Medhurst delivers a soul-soaked vocal that is backed and complemented by the girls’ backing vocals, organ, Ben Spiller on piano and shimmering guitar remarks.
A simple song in premise and arrangement, but another standout.

Similarly downtempo but steeped in roots-country is 'I Won’t' featuring Michael Ekhart on pedal steel.
These boys may be from Toronto but the song lives in Nashville, other than a wholly contemporary middle 8 that helps separate the song from the usual country-blues pack.

Southern-tinged soul-blues ballad 'Deadlines' continues the slower tempo theme and is yet another that wins out by clever use of dynamics (an almost psychedelic bridge leads to uplifting chorus finales and a purposeful lead guitar solo from guest player Ben Healey).

Penultimate song 'Hangin’ On Again' is another ballad, a slow burner that is as southern as it is country-soulful and reflective.
Featuring another great vocal from Chris Medhurst and Ross Hayes Citrullo’s finest solo of the album, the seven minutes of the song seem to pass by in half that time, a sign of how immersed in The Commoners sound a listener can become (especially if investing fully in both the music and the lyrical sentiments).

'Alive' is the perfect album closer. Lyrically reflecting on what is truly important, the pedal steel country-blues ballad again features the gifted Michael Ekhart on the aforementioned instrument and Ben Spiller on piano.

Find A Better Way doesn’t just have the songs, it sounds great, too.
Other than the Kevin Shirley mixed title track, the songs were mixed by Ross Hayes Citrullo (who produced the album with the band) and Gypsy Soul Record’s Renan Yildizdogan (Gypsy Soul Entertainment, led by Yildizdogan, are dedicated champions of the roots-rock/ Americana cause).
The pair clearly took their mixing lead from Shirley, and it’s paid off.

Musically acknowledging and honouring classic roots-rock while lyrically covering themes of life, loss, love, hope and regret, The Commoners are well-named in terms of their everyman (and woman) outlook and perspective – musically however, they are uncommonly good.

Find A Better Way is out now on Gypsy Soul Records.
https://thecommoners.ca/music/