Sweet Crisis –Tricks On My Mind 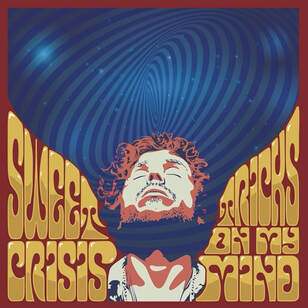 Tricks On My Mind is the album Sweet Crisis front man Leo Roberts and guitarist Piers Mortimer have probably wanted to make since their earliest schoolmate days and band get-togethers but probably thought was destined never to materialise (a number of near misses, stop-starts and ups and downs since the band’s 2015 formation are guaranteed to give you that "maybe it will never happen" feeling).

However, bolstered by a strong and cohesive line-up that's been together since 2019 – Roberts, Mortimer, Dom Briggs-Fish (keys), Matt Duduryn (bass) and Joe Taylor (drums) – that debut album has now been fully realised by the Cambridge based quintet.

And in seriously impressive fashion.

But you could also argue that, once it came to fruition, it was always destined to be an impressive debut.
This is a band that have been alive and gig kicking since 2015 and have a wealth of songs (penned by Messrs Roberts & Mortimer) and a clutch of singles and EPs under their belts – and an equal wealth and mix of classic and modern influences ranging from Zeppelin, Free and Humble Pie through to Lenny Kravitz and on to The Black Keys and Jack White, to name but six.

They’ve also played it very smart by only using the very best of those earlier songs along with newer Roberts-Mortimer offerings (for example the groovy and 70s sounding 'Rollin’ In It' from last year wasn’t rollin’ in it enough to make the cut).

Opening with a song entitled 'Loosen Up' is a slight misnomer given how tight the band are right from the off, but there is no question the gritty, psychedelic groove (and "na-na na-na!" interjections) meets contemporary rock blues (with light and shade) of the number makes for a strong, and highly impacting, opening statement.

The slower but weightier 'One Way Traffic' is equally impressive.
Another that is as contemporary in its rhythmic swagger (kudos to Joe Taylor for being inventive with his drum riffs and beats throughout the album) as it is Zeppelin-esque in its ad-lib vocal wails and John Paul Jones-styled keyboard moments (and a wah’d to the max guitar solo from Piers Mortimer), 'One Way Traffic' is a one way winner.

The atmospheric, soul-blues (and Peter Green tinged) vibe of the tempo-changing 'Ain’t Got Soul,' complete with string effect backing and tasty, near-end-of-song solo from Piers Mortimer, is a seven minute highlight of Tricks On My Mind; the funkier, heavier and similarly soul-blues fuelled 'This Guitar,' built around a sinewy bass line, is another hip-swaying highlight.

'Karma Will Come' manages to mix southern blues (and a touch of chain gang gospel) with Free and a slice (sorry) of Humble Pie, while the title track gives it the full Hendrix in 'Fire' mode with, again, a healthy dose of contemporary, thick 'n' dirty blues rock riffage.

The downtempo, six-and-a-half minute 'Misty Haze' provides further blues shaded contrast (and a little more Zeppelin as the song reaches its key changing conclusion) before the wholly contemporary 'Black Magic' (new age country twang meets voodoo soul) adds some mainstream radio play potential to proceedings.
(The song also features Sarah Brown on backing and ad-lib vocals and the Hammond keys of guest player Don Airey).
The album bows out on the contrasting but complementary brace of, first, the 70s soul meets Steely Dan vibe of 'Love Me Like Sugar' followed by the near six-minute, primarily instrumental closing number, 'Living Life on the Edge.'
The latter, built upon a purposeful repeating groove, a pulsating wall of sound and a sweep of strings, makes for a monstrous conclusion to a monster album.

Back in 2017 Greta Van Fleet made quite the impact with their EPs (and subsequent 2018 debut album); primarily because they didn’t just wear their major and obvious influence on their sleeve but all over their vocals, guitars, songs and arrangements.
All of which meant they also, immediately, became the ultimate marmite band of rock.

There is no such sweet (or sour) crisis for this band however; their influences range far and wide, from classic to modern, and their amalgamation of rock, blues, soul and a little funk makes for one of the freshest sounding rock-blues outfits of recent years.

In short, Tricks On My Mind (which sounds as good as it plays; produced & mixed by Simon Efemey, mastered at Abbey Road studios) deserves to garner Sweet Crisis the same level of attention as Greta Van Zeppelin, sorry, Fleet – and then some.

Tricks On My Mind is out now on Headline Records Ltd.