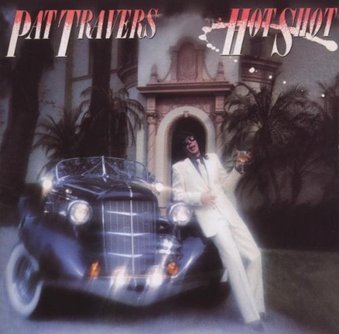 At the beginning of 2014 Cherry Red Records reissued the remastered edition of Hot Shot, the last studio album of the 1980’s by Pat Travers.

The reissue (the remaster was originally released in 2008) was perfectly timed – it was 30 years since Hot Shot’s original release; a 2014 reissue was a fitting anniversary present to itself.

But more importantly Hot Shot was the third and final instalment of a seriously under-rated trio of Pat Travers releases, all three of which have been remastered and reissued by Cherry Red Records.

The London based independent label, who excel at repackaging, revitalising and reissuing out-of-print releases, refer to the albums as the "lost classics" of Pat Travers' career – and they are absolutely right.

While Radio Active made the Billboard Top 40 it never got the attention it deserved; but it still fared better than the outstanding Black Pearl and the excellent Hot Shot, two albums that were criminally under-promoted and under-valued.

So while this power trio tale ends with 1984’s Hot Shot, it starts three years earlier with another Pat Travers power trio – the band that recorded Radio Active…

With the demise of the short-lived but renowned Pat Travers Band that included the talents of Pat Thrall (guitar), Tommy Aldridge (drums) and long-time Travers wingman Peter "Mars" Cowling (bass), the impetus gained from the Billboard Top 20 Crash and Burn and the now legendary performance at the 1980 Reading Festival was lost.

But it wasn’t all bad news.

Drummer Sandy Gennaro, the "Italian Battalion," joined Pat Travers and Mars Cowling towards the end of 1980 (Gennaro would reunite with Travers in 2010 for his second tour of Pat Travers Band duty).
Radio Active was released in 1981 and the trio went out on the road with Rainbow for a successful
co-headlining tour.

But to this day Pat Travers finds it hard to talk about the Radio Active period with any fondness or positivity, as evidenced when he spoke to FabricationsHQ in 2013:
"The recording of that album was not an enjoyable experience for me. That’s also when we started to have some problems with management and there were some business things too. And I was not in the greatest relationship so a lot of personal issues coloured what was going on then."

All the more remarkable therefore that Radio Active was such a solid album.
It carries a sonic vibe like no other Pat Travers album, has a great sound courtesy of producer Dennis MacKay and original Santana drummer Michael Shrieve plays percussion on a number of tracks.

The opener ‘New Age Music’ has a little funkiness attached to its New Age rock groove, while the instrumental ‘Electric Detective’ closes out proceedings in fine, fusionistic style.
In between those tracks are a number of gems including two unused songs from the Crash and Burn sessions, the up-tempo instrumental ‘Untitled’ and the should-never-have-been-off-the-radio ‘I Can Love You.’

Reflecting the place Pat Travers found himself in during the recording of Radio Active are the slow-song brace of’ Play It Like You See It’ and ‘(I Just Wanna) Live It My Way.’
However the spacey blues of the former and the fusion blues of the latter are two of Travers’ finest songs, primarily because there is so much space on both numbers for the artist to express himself and his notes to breathe.
When Radio Active was released Polydor Records were in a state of flux and change.
The label was looking to revamp their artist roster and, believing Radio Active to be their last record with Pat Travers, didn’t exactly knock themselves out promoting the album.

When Travers made it clear they owed him at least one more album and took them to court over it (eventually winning his case) the writing was on the wall for the next release – zero promotion from the label and the Curse of the Black Pearl for Pat Travers....

The ridiculously infectious rock-reggae cover of Bob Marley’s ‘Misty Morning’ should have been a hit single; ‘The Fifth’ is Beethoven with a Marshall stack; ‘Who’ll Take the Fall’ and George Wallace's fully rocked up ‘Stand Up’ are prime slices of hard edged, melodic rock.

The power-rock and hooks of ‘I La la La Love You’ did get some deserved airplay however (but the less said about the dreadful and ill-advised MTV-styled promo video the better) and the song also featured in the movie Valley Girl.
Black Pearl is the greatest under-heard rock album of the 80s.
It’s a record that should have been a platinum seller but one of the finest ever releases from Pat Travers was ignored; a Black Pearl that lay hidden in the chart depths.

"Well by that point we had some pretty wild legal issues going on in courts with management and the record company" Pat Travers told FabricationsHQ.
"So, yeah, we did get ignored but I guess in my particular life-cycle it’s taken until now for me to be vindicated or validated."

Those legal issues led to an inevitable musical divorce.
Hot Shot, released on the PolyGram label and not the Polydor subsidiary, was the last throw of the 1980’s dice for Pat Travers.

Hot Shot is a tale of two sides in original vinyl terms.
On Side One Pat Travers came out all guns blazing with four of the feistiest numbers he has ever committed to record. The quartet of big, beefy cuts includes the raunchy ‘Killer’ and the rockin’ punch of ‘Just Try Talkin’ To Those Dudes’ (aimed, unsurprisingly, at record label executives).

With melodic rock dominating the US airwaves in the mid-80s, Side Two featured three management suggested songs that carried a decidedly more commercial appeal.
Ironically, Travers out-did them all with his own, self-penned power-pop number ‘Tonight’ and then closed out the album on a melodic high with the feel good, mid-tempo rock of ‘Night Into Day.’

Various musicians were used on Hot Shot including Grand Funk drummer Don Brewer; Mars Cowling contributed to a couple of numbers, including the title track, before leaving Pat Travers' side after a near-decade of service (Cowling would return for a second stay in the early 90s).

Hot Shot suffered an even worse fate than Black Pearl – it didn’t make the Billboard Top 100.
With no label backing, Pat Travers stepped away from the recording side of the industry for six years but toured solidly with a new Pat Travers Band that included guitarist Jerry Riggs, bass player Barry Dunaway and drummer Pat Marchino.

The 1980’s should have been a multi-platinum decade for Pat Travers, building on the musical foundations laid by the critically acclaimed Crash and Burn.

However line-up changes, unforeseen circumstances, poor management decisions, personal issues and the super group no musician wants to be part of – Label, Lawyer & Lawsuit – made it the decade of what-could-have-been for the respected Canadian musician.

Audio tracks presented to accompany the above article and to promote the work of the artist.
No infringement of copyright is intended.