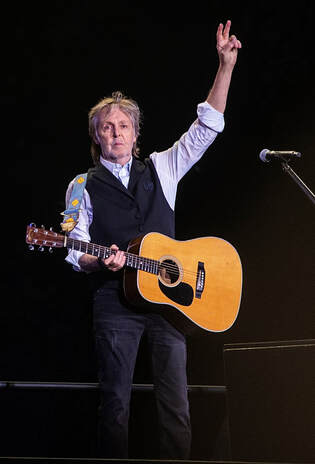 Photo: Invision
The Glastonbury Saturday night slot has become the crown jewel gig in the annual live music calendar.
A slot reserved for the great and the very-great, after a three year Covid-enforced hiatus, the festival returned this year with the biggest name possible headlining, Paul McCartney.

Sir Paul, or Macca, was meant to headline in 2019 before the virus hit – a three year delay that saw him release a much-lauded lockdown album and, more significantly, reach his 80th birthday just a week before the Glastonbury gig.
Macca thus became the oldest ever headliner on the Glastonbury Pyramid stage, a fact rather sweetly juxtaposed by Billie Eilish being the youngest ever headliner on the same stage the night before, aged 20.

Macca headlined "Glasto" in 2004, when my Mustangs band mate Ben McKeown returned proclaiming it pretty much the greatest thing he had ever seen (in no way influenced by too much scrumpy, in no way at all).
I myself had seen Macca a few times in cavernous London arenas, and had pretty much regarded the gigs the same way. I mean, with that back catalogue, how can you possibly fail?

But Glasto 2022 was going to be a very different proposition.
Much has been made of his ailing voice – would it reach the screeching highs of days gone by?
And will the young millennials even know a Beatles song if it popped up on their Tik Tok feed?
Moreover, with blanket BBC coverage of the whole weekend, it was going to be a gig that much of the entire country would be watching.
For lifelong Paul McCartney devotees like myself, the stakes were high – by morning he would be regarded as an almost-superhuman gift to culture, or a hoarse old man who wrote some decent tunes (both extremes exaggerated for mild comic effect).

​Before I continue, a disclaimer – I wasn’t there, although I should have been.
I had a ticket and I was almost uncontrollably excited at seeing what may well turn out to be Macca’s last ever UK performance, but for reasons too complex to bore you with, my festival buddy (the aforementioned Ben McKeown) got Covid, resulting in neither of us being able to attend.

So, like millions across the country I sat on the sofa, dimmed the lights, turned up the sound and waited for the magic, or the misery, to begin.

Before what’s reported to be the biggest Pyramid Stage crowd yet seen, Paul McCartney and his stellar band (accompanied on many songs by an excellent three-piece horn section) opened with 'Can’t Buy Me Love.'
The Glasto crowd roared its approval and sang with gusto (including an impromptu but unified follow-on of 'Happy Birthday'). 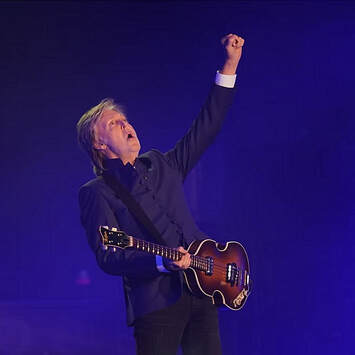 Photo: Harry Durrant/ Getty Images
It would have been easy (too easy) for Macca to roll out hit after hit after hit and give the crowd what they want, but in a career spanning six decades, he instead decided to plunder (for the first half at least) his unmatchable back catalogue for not only Beatles deep cuts, but Wings hits and charming solo ditties.

To everyone’s taste and approval it was not.
Perhaps forgetting that the man has earned the right to play whatever he damn well wants, or not wanting to admit that many of his post 1973 songs are actually bloody good, social media was suddenly alive with Macca detractors proclaiming the gig a bore, or his set choice to be, of all things, “naïve.”
Isn’t it depressing how social media makes everyone an expert?

Not that you’d know there was such an ado at Glasto.
Distracted from their iPhones, the Glastonbury crowd roared their approval song after song, singing their hearts out when Macca delivered one of his more uber-famous numbers.
His fabulous band, including Rusty Egan and Brian Roy on guitars, Paul Wickens on keys and the wonderful Abe Loreal Jnr on drums, delivered the songs with respect, gusto and passion – doing great service to the solos you can hum and the backing vocals you can’t.

But what of Macca’s much talked-about singing voice?
Certainly it was down in the mix a bit, but it was nowhere near as bad as had been rumoured following an extensive US tour.
For sure, at some gigs over the last few years it has been shaky and hoarse, but here he was in fine voice.
Of course it wasn’t the incredible instrument of three decades ago, but people forget that many of these songs would be very hard for a 40 year old to sing… in an age where we can video a 20-years younger Bon Jovi struggling to stay in tune, Macca hit every note – perhaps not with the muscle of yesteryear, but rather wonderfully still with all the enthusiasm (and energy) of a rocker a quarter of his age.

As the gig went on, Paul McCartney began rattling off classic after classic, with the spectre of the really big guns still to come – but there were still surprises on the way, not least in the form of two special guests.
Dave Grohl (making his first public appearance since the death of Foo Fighters band mate Taylor Hawkins) joined the band for a ragged 'I Saw Her Standing There' and a powerful 'Band On The Run.'
The Boss himself, Bruce Springsteen, then came on stage for a run through of his own hit 'Glory Days' (which seamlessly slotted into the singalong vibe of the evening), followed by a raucous 'I Wanna Be Your Man.'

There were also touching tributes to George Harrison (a moving 'Something') and John Lennon (McCartney’s acoustic ballad 'Here Today').

As Macca and his excellent band stormed joyously towards the finish line, the hits got bigger, the crowd’s singing got louder and the smiles got wider.
'Get Back,' 'Live & Let Die,' 'Hey Jude' (complete with obligatory and epic "Na Na Na" coda) were all delivered to an adoring crowd, a vast majority for whom this man has been a distant icon from their grandparent’s record collection​ – only now they were finding out exactly why.

The best festival music brings joy to the masses, it spreads a message of togetherness and harmony – a sense that we are all in this together.
As long as we can all sing the coda of 'Hey Jude' at the top of our voices as one, everything will be alright.

As Macca returned for the encores, he was joined for 'I’ve Got a Feeling' by John Lennon (via the big screens behind him), singing the choruses’ counterpoint.
It was a touching trick, but also a reminder that before long all our 60s and 70s rock heroes will be gone; all to be just video tricks and avatars on a stage one day. 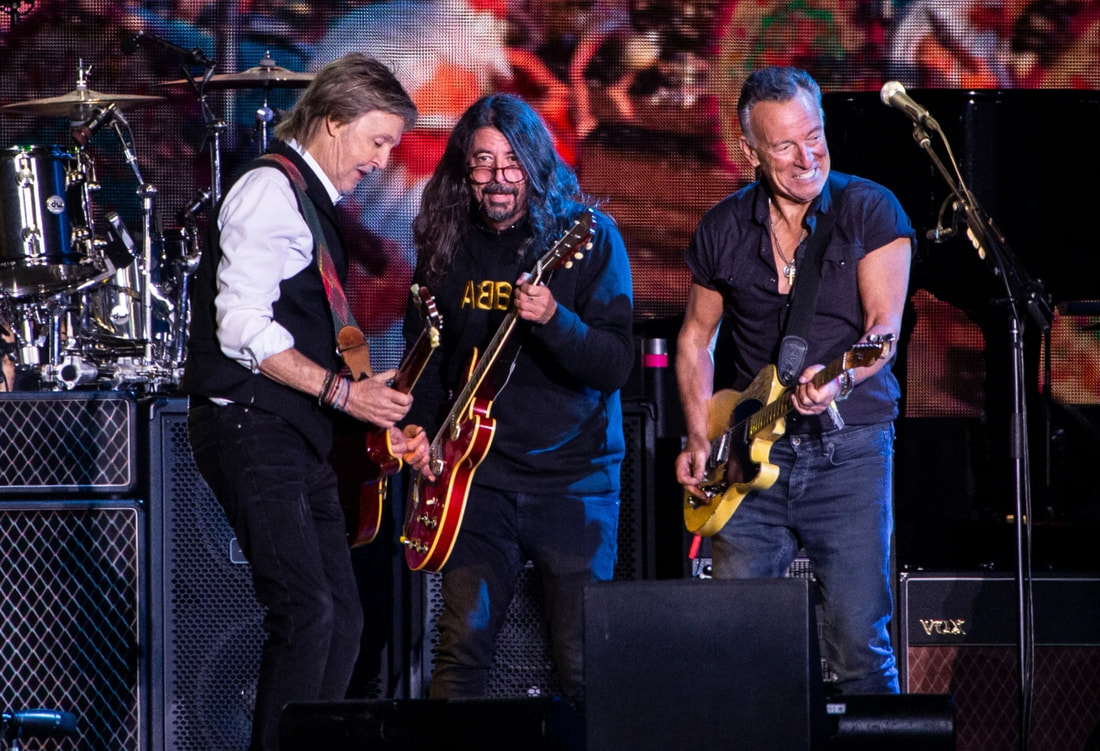 Photo: Joel C Ryan/ Invision
​Paul McCartney and band ended with 'Golden Slumbers,' his sublime three-song suite that closes Abbey Road. I don’t mind telling you that, not for the first time during the gig, I had a lump in my throat and a tear in my eye (as since found out, I was hardly the only one).

But it wasn’t just the beauty of the music that brought on such feelings, it was also the hard to ignore harsh truth that you were witnessing one of the most magnificent of all careers in its twilight.
But if this is to be Macca’s swansong, he was going out every inch the megastar he came in.

As Dave Grohl and Bruce Springsteen re-joined the stage for a rousing back-and-forth guitars fest through 'Carry That Weight,' the noise faded and we were left with the band navigating the intricate harmonies of 'The End.'
As that song so famously declares: "And in the end, the love you take is equal to the love you make."
Few sentiments have ever been as elegantly and so concisely expressed, whilst being applauded by not just the entire audience but Messrs Grohl and Springsteen, both of whom were in genuine, bright eyed awe.

A truly triumphant gig for any performer. But for an octogenarian Beatle, quite phenomenal.