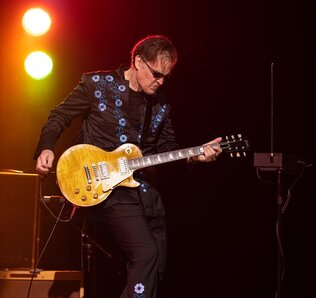 When Joe Bonamassa announced a live stream, power trio concert for April 1st there was the thought this could be an April Fools Jo-Bo joke on those of us who have followed him since his earliest small band visits to UK shores some fifteen years ago, hoping for another, now rare sighting of the acclaimed guitarist in just such a no frills, high energy format.

Good news then that not only was the performance from Austin City Limits Live an early Easter egg of hidden delights (a fan chosen set list guaranteed a number of deeper cuts and some songs not played in nigh on twenty years), it allowed Joe Bonamassa to flex his trio muscles in the company of long-time/ go-to drummer Anton Fig, bassist Steve Mackey and Trio + 1 member Jade MacRae (backing & harmony vocals).

In short, not an April Fool gig but an April Fuel gig for the artists Joe Bonamassa has helped through his Fueling Musicians relief programme, which over the last year has raised over $400,000 to assist more than 230 artists who continue to be income affected by the COVID-19 crisis (each ticket purchased for the Austin City Limits Live performance included a donation to Fueling Musicians).

Further, and just as importantly, in front of a socially distanced crowd of 700 (and thousands of virtual ticket viewers across the world) Joe Bonamassa and band put on a bit of an old-school power-trio belter.

​A powerful and purposeful 'Oh, Beautiful' (with excellent harmony vocals from Jade MacRae) was the perfect light (A Cappella verses) and shade (thick-toned Zeppelin-esque sections) opener – and perfect power trio/quartet introduction to a show that was far more rock with blues than blues with rock. 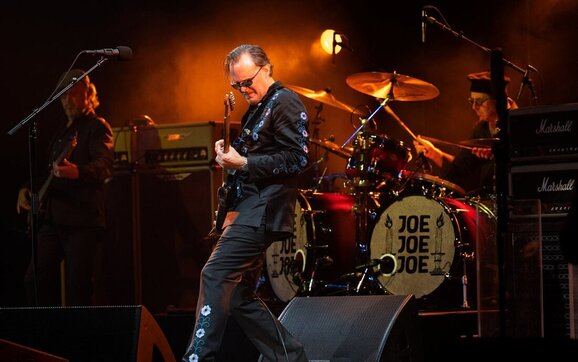 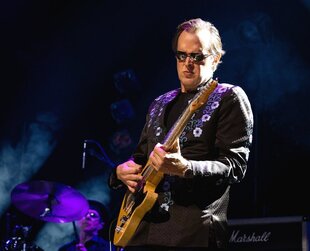 Rock orientated show that it was the blues did, naturally, come calling on a number of occassions.
Particularly expressive and impressive examples were Gary Moore’s 'Midnight Blues,' the blues-soaked arrangement of Tom Waites’ 'Jockey full of Bourbon,' the downtempo, hear-a-pin-drop slow blues of Jeff Beck’s 'Blues Deluxe' and Joe Bonamassa original, 'Wandering Earth.'
The latter, a pulsating, tempo-changing blues from 2010’s Black Rock, is both under-heard (never before played live) and under-rated.

Thickest and grittiest riff of the night award went to a bristling, bass-line brooding performance of 'Lookout Man.' The weighty number is a real highlight of Joe Bonamassa’s current album, the British blues/rock influenced Royal Tea, as is the other Royal Tea song that featured, the anthemic mini-epic 'Beyond the Silence.'
The latter, here given an extended jam-workout treatment to twice its studio length, worked exceptionally well in its lengthier, space to play trio format.

Similarly impressive was 'Pain and Sorrow,' the Hendrix meets jam-blues/rock number from Joe Bonamassa’s second studio album So, It’s Like That.

But it wasn’t all about the songs on the night.
Joe Bonamassa took time across the two hours plus show to introduce some of the numbers or add personal comment, a trait conspicuous by its absence at big band/ big venue/ big audience shows.

It's possible however the intimacy of the situation, along with the recent documentary have allowed Joe Bonamassa to be more open on stage – case in personal point was his "high-school girlfriend" story that introduced older number 'Miss You, Hate You' (here including guitar and drum (solo) jam) and the admission that the song was originally entitled "Miss You, Fuck You!").

​​Proof of the flexibility in Joe Bonamassa’s fretboard fingers then came via a tidy rendition of Stevie Ray Vaughan’s 'Scuttle Buttin’' (well, when in Austin…) before a monster version of 'The Ballad of John Henry' (with Jade MacRae vocally pitching as high as the theremin effects) closed out the main set.

An encore finale of Joe Bonamassa’s frenetically fingered acoustic solo piece 'Woke Up Dreaming' and full band rendition of 'Crossroads' brought to end a set, and performance, that proved Joseph Leonard Bonamassa was no April Fool when he decided to make a back to his roots return to the power trio format.

To donate to, apply for, or find more information on Fuelling Musicians, head to:
https://keepingthebluesalive.org/