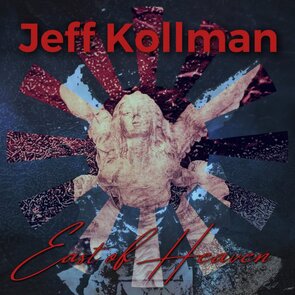 Noted and highly respected American guitarist Jeff Kollman may not be a household name but his musical CV is a big as any of those households he’s not a name in.

Add in the fact he’s been a session guitarist, producer, has written for TV and movies and owns & operates Marmaduke Records (through which he releases the bulk of his albums) and you wonder where he finds the time to record and deliver said albums, the latest being his sixth – and best to date – solo studio release East of Heaven

Jeff Kollman’s playing style is rooted in rock/metal and he can shred with the best of ‘em – but he is also a melodically fluid player.
More importantly, he is one of those (sadly too few) rock guitarists who doesn’t overplay, despite being able to impress with pure technique.

East of Heaven starts with the short, lovely and mournful guitar piece 'Loss;' Jeff Kolman’s guitar wails over the top of a soft synth backing from keyboardist Guy Allison in a manner not unlike Jeff Beck at his peak.

By contrast 'The Mass Exodus' is a painstakingly crafted multi-tracked number with interesting mid-tempo time signature and an unexpected chord sequence.
Multi-talented drummer and long-time collaborator Shane Gaalaas is particularly effective on this number, building the song towards Jeff Kollman’s stellar solo (Kollman is also a master of using effects pedals, sparingly, and at the right moments).

Short solo guitar number 'Homage to King Edward' says more in its sixty-eight seconds than a lot of guitarists do on an entire record before the album veers into Satriani territory for 'Superstring Theory,' a riff-heavy rocker with a memorable melody line and tastefully executed guitar solo.
​'Ghostly,' a true highlight among many, sports an effective downtempo chord sequence and a melody that ebbs, flows and builds (courtesy once again of Shane Gaalaas) in a menacing manner worthy of the title.

The understated 'Insomnia' then showcases Jeff Kollman’s acoustic guitar skills before '67 XR-7' introduces a bit of funk to proceedings.
Another winner, the latter features Jeff Kollman cutting loose over complex chord changes not unlike Larry Carlton in his hey-day ('67 XR-7' could almost be from a Steely Dan album with the chord sequences employed and its laid-back, west coast vibe).

'Montecatini Waltz' has a similar 'Dan vibe but with acoustic guitar taking the melody (Jeff Kollman ably demonstrates his jazz chops on this quite lovely number with chromatic solo lines).
Additionally the shared melody parts with accordion are fashioned in such a way as to be reminiscent of Al Di Meola’s association with (and influences of) famed Argentinian bandoneon player Astor Piazzolla, while Paul Shihadeh’s bass work (and his solo) is simply spectacular.

The self-explanatory title of the reflective 'Isolation 2020' is another masterclass of restraint and tasteful guitar play; it’s followed by the eastern flavoured title track (mixing guitar soundscapes, heavy reverb and tabla), Jeff Kollman cutting loose halfway through on a solo full of emotion and grace.

'So Long Ago' is a multi-tracked number that shows, once again, Jeff Kollman’s mastery of the acoustic guitar and compositional skills.
The other-worldly 'Hidden Dimensions' also starts with acoustic guitar but moves to electric for the melody line. This number offers up further examples of eastern influences along with dissonance, metal-fusion and a complexity that hints at Cosmosquad.

As the title suggests there is a hint of menace in 'The Darkness Resides,' a number where Jeff Kollman again dazzles on acoustic guitar (including some stunning harmonics work) while hinting at further Al Di Meola influences (no bad thing).

Produced, engineered and mixed by Jeff Kollman and ably supported by the aforementioned Paul Shihadeh, Shane Gaalaas and Guy Allison, East of Heaven is the sort of album, and Kollman is the sort of artist, that deserve far wider recognition and support in an era where musical creativity is trampled underfoot by manufactured commodity.

This is thoughtful, emotional and real music. It’s also a contender for rock album of the year, instrumental or otherwise.