From the mid 80s to the late 90s Chris Lloyd and Peter Anderson were a successful singing duo on the variety circuit.
Over a twelve year period Lloyd & Anderson recorded five albums, embarked on cruise tours and made many TV appearances.

But sensing it was time for a change and a new musical challenge, Chris Lloyd decided forming a tribute band that highlighted their voices and complementary vocal harmonies was the way forward.

But not just any tribute band...

The Eagles are one of the most popular bands on the planet.
Hugely successful, a ridiculous amount of beautifully crafted classics in their back catalogue and, at last count, worldwide sales of eleventy squillion.

That's a hard act to follow. Or emulate. Or pay tribute to.
But that's just what Chris and Peter did when they formed Talon in 1997.

When Talon first extended its claws the band was a quintet that picked up a strong following and solid reputation through hard work, word of mouth and positive review.
The early pub and club gigs soon became small halls; by the dawning of the Millennium Talon were selling out theatres across the UK.

Line-up changes led to bass player, singer and keyboardist Jonny Miller joining Chris Lloyd and Peter Anderson at the end of 1999; lead guitarist and singer Tony Vegas was recruited in 2003.

The Lloyd, Anderson, Miller, Vegas quartet have since become the definitive lead voice line-up of Talon: The Best of Eagles (to give them their full stage name); they have developed from being a very good Eagles tribute band to a group that deliver an exceptional Eagles tribute show, augmented on stage by three other talented musicians.

Keyboardist Freddie Miller, younger brother of Jonny Miller, joined the band in 2014.
Freddie effectively replaced Craig Wainright when the latter found his true calling at the sound desk where his not inconsiderable audio and mixing skills have given Talon one of the crispest and clearest live sounds of any band or artist on the touring circuit.

Live, Talon produce a tight, collective sound but there are also some great individual performances such as Jonny Miller's piano arrangement of 'Love Will Keep Us Alive' (which also features Keith Buck on pedal steel) and Tony Vegas cutting loose on 'Rocky Mountain Way' or 'Life in the Fast Lane.'
The Talon performances are usually around two hours, with an interval, and each year sees a new slant on the Eagles music performed, as Chris Lloyd explained: "Each January we sit down and decide what form that year’s spring and autumn tours will take. In the past we've done greatest hits shows and tours called 'Hell Freezes Over Revisited' and 'Take it Easy to Eden.' In 2010 we did the 'Hotel California' tour, performing that album in its entirety.”

​Vocally, the Talon singers each take on the role of a specific Eagles voice.

The vocal roles described above are not an exact science however; dependant on song and set-list there can be exchange of material.
Nor are the Talon singers vocal mimics; the featured vocalists don't have the same tonalities as their Eagles counterparts (although there are similarities) but they pay homage to those instantly recognisable and renowned Eagles voices by delivering the same vocal phrasing with passionate lyrical intent and respect.

The band members are not too shabby as musicians or songwriters, either – in 2005 Talon released Better Than Before, an album of self-penned, country influenced pop-rock numbers.
As well as the Eagles shows, Talon, in the guise of Chris Lloyd, Peter Anderson, Jonny Miller and Keith Buck, also play Talon Acoustic dates; the quartet cover songs by artists such as Crosby Stills & Nash, Simon & Garfunkel and James Taylor.

There have been a number of highlights in Talon's career but without doubt one of the most gratifying took place in April 2010.

In late 2009 Chris Lloyd received an email asking if he would he be interested in a professional association with Jack Tempchin when the American singer songwriter was in the UK (Tempchin is the man responsible for the Eagles classics 'Peaceful Easy Feeling' and 'Already Gone;' he also has writing credits on Long Road Out of Eden).

Chris's first thoughts weren't to be taken aback, but to believe he was being taken for a ride:
"I get a lot of emails in connection with Talon but I honestly thought this one was a wind-up! I followed it up though and it turned out to be true. I flew over to California that December, had dinner with Jack and we discussed plans. In April 2010 he flew into the UK and performed as special guest with Talon on three shows. It was a great week and dream come true." 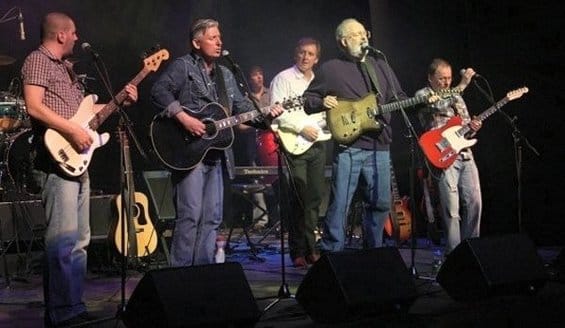 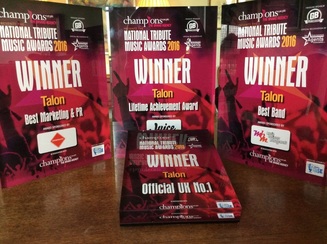 Performing with Jack Tempchin made 2010 a very hard year for Talon to follow.

But follow it they did, and continue to do so...

On the 2011 spring tour Talon performed sets based on the Eagles Farewell 1 concerts of 2004, which included a horn section at selected venues (the horn section would return for the entire 2015 tour).

In June 2012, to celebrate their 15th Anniversary, Talon chartered a cruise ship for a three day, sold-out, Talon Cruise, taking in Antwerp and Amsterdam.

Industry recognition came calling in 2013 when Talon were honoured at the UK’s National Tribute Music Awards as the Official UK No.1 Eagles tribute.

That award kicked off another great year for Talon – in August 2013 the band embarked on a lengthy UK tour that included a three-day Talon Weekend Festival in Moira, Derbyshire; the event also featured Chris Lloyd performing his Jazz Lines show, accompanied by the Alan Warner Trio.

In 2014 Talon Acoustic, by now a successful touring entity in its own right, released the excellent studio album The Acoustic Collection; it was followed in 2016 by the live album In the Raw.

The perfect rock complement to The Acoustic Collection arrived in 2015 when Tony Vegas released Life’s Been Good, a tribute to Joe Walsh.
Doing the songs of the legendary guitarist justice is no easy feat but Tony Vegas has a genuine affinity for the material, is an excellent if unheralded (outside of the tribute arena) exponent of the rock guitar and not dissimilar vocally to Walsh.

For all the plaudits, acclaim and positive critical review bestowed upon Talon over the years, 2016 became the ultimate year of achievement – and a lifetime one at that…

At the 2016 UK National Tribute Music Awards Talon picked up three trophies – a prestigious Lifetime Achievement award, Best Marketing & PR
(a deserved nod to the sterling efforts of Chris Lloyd’s wife Anni who works as hard off stage as the band do on it) and Best Band (which in turn reinforced their Official UK No.1 Eagles Tribute status in the shape of
a fourth award).

2016 was also the year the rock and pop world lost a number of legendary or significant individuals including David Bowie, George Martin, Prince and
co-founder and driving force of the Eagles, Glen Frey.

With Frey’s passing comes the almost certain end of a band called the Eagles but their music, live, will continue to be played by a host of covers and tribute bands on both sides of the pond.

But none do it better than Talon who, as they head towards their 20th Anniversary year in 2017 as the UK’s best tribute band, continue to play that exceptional back catalogue in exceptional, and revered, fashion.

Talon. Long may they soar on Eagles wings.
And their own.


Ross Muir's companion article on the tribute scene, Playing Tribute, can be read by clicking here.