Wayward Sons – Even Up the Score 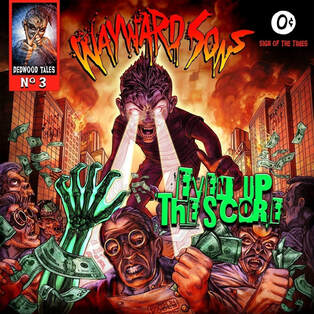 There’s nothing Wayward about the third studio album from these new wave Sons of classic rock who, once again, have wrapped their take on the genre in their own sonic blanket of pop-metal, rock ‘n’ roll and ridiculously engaging and infectious hook choruses, led by the voice and clever lyricism of Toby Jepson.

Indeed it’s by not changing the impacting, ear-catching and highly individualistic formula that Jepson, Nic Wastell (bass), Phil Martini (drums), Sam Wood (guitars) and Jepson’s musical wing-man since their Little Angel days, Dave Kemp (keys) delivered on debut album Ghosts of Yet To Come and follow-up The Truth Ain’t What It Used To Be that makes Even Up the Score so impressive and hard-hitting.

It’s also the third instalment (as presented via the comic-book styled cover artwork) of what could be described as high-quality pop-metal protest albums, bolstered further by a sonic urgency (and a hefty helping of Jepson’s trademark lyrical cynicism – he really is on a mission to even up the score) that fits the current panicked, pandemic and political times.

It’s also worth mentioning that the average length of the twelve songs is the classic three-and-a-half minutes; short, sharp, highly impacting and never outstaying their story-telling welcome.

The opening title track features razor-sharp riffing and verses with clever time signature changes that segue into a chorus with a very strong hook.
As expected, the whip-smart lyrics and vocal performance of Toby Jepson also immediately catch the ear...
​The hard pop rockin’ of 'Big Day' keeps the tempo, and standard, on a high note while Toby Jepson’s delivery of a stanza has some similarity to Squeeze at their peak (the guy can deliver a great line on paper and on a recording).

'Sign of the Times' features a monstrous opening slab of a riff, another catchy chorus and a great middle 8.
Sam Wood excels in this number and contributes a killer multi-tracked solo which should delight the Brian May fans.

The tempo and intensity of 'Bloody Typical' is less than the opening trio but it’s yet another well-crafted number that, again, comes across like a rocked-up Squeeze with equally clever word craft ("it's like your brain has been removed, in place they've wired a circuit board; it bleeps your tired confusions, predictable delusions - you're desperate for reactions, but don't state your conclusions").

'Faith in Fools' is a light and shade, mid-tempo foot-stomper with another great middle 8 and a chorus that is almost Beatles-esque; Toby Jepson again delivers the message of the song with passion and told-you-so conviction ("If you put your faith in fools you’ve only got yourself to blame; when it all comes down on you, that's a self-inflicted pain").

The quirky rock-pop of 'Fake' maintains the standard (the angular riff and choruses sounds like a heavied-up Cars) while the sparser 'Downfall' sounds like a modernised Thin Lizzy, Nic Wastell and Phil Martini providing a rock-solid rhythm (as they do on all of the songs).
Guitarist Sam Wood again shines on the latter number, as does Toby Jepson with his sharp vocal delivery.

'Tip of my Tongue' also carries a sparser arrangement but it certainly doesn’t fall into the mid-album filler department (indeed it’s a testament to Wayward Sons that they maintain such a high standard of songwriting). A clever guitar solo with use of stereo separation further elevates this new wave-tinged number.

The punchy, pop-punk of 'Looking for a Reason' is another up-tempo winner (the simple but highly effective drop to only vocals and drums at some points is a master-stroke) as is following track 'Land of the Blind,' an edgy little melodic rocker that builds to a big "the one eyed man is king!" finish.

Penultimate number 'They Know' rocks out with another strong chorus (and yet another poptastic little middle 8 and Queen-esque guitar play) before the anthemic (and sparingly used "woah-oh") swagger of 'This Party’s Over' brings the album to a fittingly titled end.

Wayward Sons proudly carry echoes of the luminary likes of Queen, Lizzy, Squeeze and Mott the Hoople but this is a mighty fine band in their own distinct sounding right, courtesy of outstanding songwriting, great vocals, top-notch production and exceptional playing.

They may have evened up the score but the final result is an album that’s a serious contender for rock album of the year.