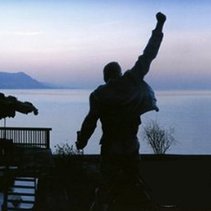 Mick Jagger is the voice of the Rolling Stones, arguably the world’s greatest ever rock and roll band.

Jagger will never be cited as the greatest vocalist in the world, but he is one of the great front men. Incredibly charismatic, with a highly animated and commanding stage presence.

Then there's Dave Lee Roth. A true showman of rock, but not exactly the best singer in the world.

One of the best showmen, but not the best…

Freddie Mercury dominated a stage like no other, but unlike similarly flamboyant front men he had a voice as strong as his physical presence and is one of the greatest pop & rock vocalists of all time.

Mercury had a range of nearly 4 octaves and could instantly step from his strong rich lower register to an incredible high-end delivery that has been compared to a coloratura (a stylised form of soprano).
He also had excellent vocal control through the upper register.

Incredibly he had no formal training (or so he always claimed) and although his normal speaking voice was a baritone he sang as a natural and deceptively powerful tenor. He could probably have also performed light opera (his falsetto note on ‘Under Pressure’ is quite operatic in style).

The above abilities (or anomalies, if you prefer) coupled with his own distinct tonality may make him unique amongst rock vocalists.

And what tends to be forgotten in amongst all the truly classic or timeless pop and rock songs Queen wrote and performed is the that some of the Queen songbook was vocally more of a challenge than would first appear.

That was never more evident than during the Freddie Mercury Tribute Concert at Wembley Stadium in 1992 when notables such as genuine rock greats Roger Daltrey and Robert Plant struggled with the vocal change-ups and vocalisations of their Queen covers (‘I Want It All’ and ‘Innuendo’ respectively).

The only criticism over Mercury is that live he would sing a little lower, usually half a step down, and never or rarely took on his studio money shots (or was assisted by drummer Roger Taylor, who also had a solid high-end and falsetto back in the day).

However Mercury was a brilliant singer and, as regards a front man who was not only a great vocalist but a great showman (and therefore a true entertainer), he was, in that dual role, untouchable.

Of course it didn’t hurt that Queen were an incredibly talented band with a ridiculous amount of quality albums and classic songs in their repertoire.
Nor should it be forgotten they were an accomplished band of musicians even in their formative years; they performed and recorded some truly classic heavy rock with light and shade on their early albums before commercial and global success came calling.

And that success led them to become pop and rock giants of the singles charts, album charts and world stages – yet still with their own distinct sound and style. And very much on their own terms.

By the mid-80s they were one of the biggest groups in the world and although all band members contributed to that achievement (bass player John Deacon wrote a number of their most successful hits), their signature sound was the distinctive guitar tones of Brian May and the exceptional vocals of Freddie Mercury. 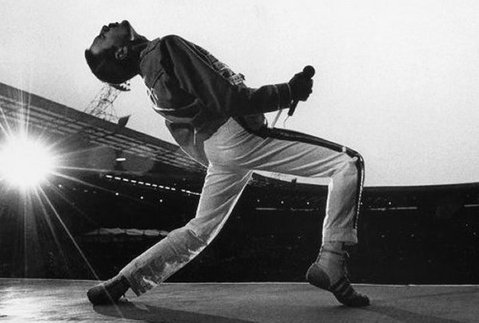 Queen Mercury, King of Wembley. Under the spotlight at the famous
stadium in 1986 in what was one of the greatest ever rock concerts.

Many critics, musicians, singers, fans and reviewers give the nod to Freddie Mercury as the best ever pop and rock vocalist.
Personally I have him second to one, the phenomenally voiced ex Journey front man Steve Perry, but that's a whole other Muirsical article.
But, as regards showman, Mercury was second to none.

There are great musical moments and events that many of us regret not having the opportunity to be part of.
Equally, there will be many such events we will feel privileged to have seen - catching Queen with Freddie Mercury at the height of his vocal, stage and showmanship powers are a personal highlight (The Crazy Tour show at the Glasgow Apollo in 1979, for example, remains one of my all-time favourite gigs).

As regards universally acclaimed all-time concerts, Queen’s short-set at Live Aid in 1985 and their own Magic Tour show at Wembley the year after are unarguably and unequivocally two of the greatest ever performances in rock.

And their headlining nights at the first ever Rock in Rio festival in January 1985 – in front of over 300,000 each night – weren’t too shabby, either.

As I close this Mercury memory, I can't help but wonder what camp crooning the ultimate showman and gifted vocalist would be up to if he was still around today, because although he would be 65 I doubt very much if he would have retired.

And the reason I’m reflecting on Freddie Mercury is because of the date I wrote this article – the 24th of November, 2011. Exactly 20 years on from his death.

And, for the 20 years before that, from the early 70’s to his last hurrah with Queen, Freddie Mercury had the days of his life.

Thanks for the memories, Freddie.
Ross Muir
November 2011


Audio track presented to accompany this article and in tribute to the memory of Freddie Mercury.
No infringement of copyright is intended.