I’m not the only music reviewer putting keyboard to electronic paper in the month of January in the year of 2011, not by a long way, and for a specific reason.

January 4th 2011 marked the twenty-fifth anniversary of the death of one of the most charismatic musicians and vocalists ever to step on to a stage.
And one of rock music’s true greats.
Hence this Remembering.

But why 'Part 3?'
Well, primarily because Parts 1 & 2 have already been written.
Forty years ago…

Remembering Part 2 - Thin Lizzy (1971)
Philip Parris Lynott was only 36 when he died, but for some fourteen years he was a pivotal and creative part of Thin Lizzy, the famous group he co-founded and fronted until their 1983 split.
Their classic back catalogue and musical legacy was always destined to last beyond his life, has been embraced by a new generation of listeners and continues to be championed by countless fans around the world.
Thin Lizzy’s music is still performed by a number of solid tribute acts and, since 1996, by the touring band carrying the name.

Lynott’s musical career began in and around the Dublin area in the mid-‘60s, when he became singer with the Black Eagles. Drummer Brian Downey, previously of the Liffey Beats, joined the band but they broke up after only a short time together.
Lynott then joined Kama Sutra before singing, albeit briefly, in Skid Row, a band led by Brush Shiels. Skid Row would go on to feature a young guitarist by the name of Gary Moore and released a couple of albums on CBS after Lynott’s departure, with Shiels taking lead vocals.

Interestingly, it was Shiels who taught Lynott how to play bass and Lynott would develop into an accomplished but under-rated four-stringer, with a distinct punchy, driven style that would define so much of his later material.
Lynott then hooked up for a second time with Brian Downey when they formed a new band, Orphanage.

In 1969 Lynott and Downey’s career took what would become an upward and hugely successful turn, although that success was still a few years away.
Downey and Lynott quit Orphanage to form Thin Lizzy with guitarist Eric Bell and keyboard player Eric Wrixon.
An interesting aside is in 1964 Wrixon had been a founder member of Them, featuring Van Morrison, and Bell played in what became the last incarnation of the band to feature Morrison in 1966.

In 1970 Wrixon departed shortly before Thin Lizzy’s first single was released (a resounding flop). The band continued as a trio and relocated to London.
They released three albums that met with little commercial success but got them noticed. The albums, for the most part, featured interesting and eclectic material that included rock, Celtic-folk and the occasional spoken word narrative.

Early in 1973 chart success finally came along in the form of a non-album track.
Their cover of the traditional Irish ballad ‘Whiskey in the Jar’ was a hit in the UK, Ireland and parts of Europe.
But in terms of making their musical mark in rock history the seeds weren’t sown until the classic Lizzy line-up was put together over a year later with the arrival of two virtually unknown guitarists...

When Bell quit Thin Lizzy at the end of 1973 Gary Moore worked with the band for  four months, but it wasn't until a young Scot by the name of Brian Robertson and a Californian called Scott Gorham joined in 1974 that Lizzy’s place in rock history was secured.
Lizzy's famous four-piece were hardly an overnight success – their first album together was a lightweight affair that failed to chart.
But by 1975, and until 1979 (with Gary Moore replacing Robertson in 1978), Lizzy could do no wrong.
Blistering support slots followed by hot-ticket headlining tours on both sides of the pond. A string of successful and critically acclaimed albums including Johnny the Fox and Live and Dangerous. Hit single after hit single. Thin Lizzy developed into one of the tightest, high-energy and best-ever live acts rock music ever saw or heard.

Lynott revelled in the success and, after the struggles and disappointments of the early musical years, he certainly deserved it.
He enjoyed the fame, and it was clear he enjoyed the fame, living the rock and roll lifestyle to the full. But living that life wasn’t the only habit he adopted and then became addicted to. Those other habits would be the cause of his sad and tragic, yet self-inflicted, demise.

Before those darker days however Phil Lynott had established himself as one of the greatest front men in rock with his audience rapport, trademark menacing-but-melodic vocal (with that Irish brogue accent infused into the delivery) and those driving bass runs.
The thin black-clad charmer, with a gleam in one eye and a girl in the other. 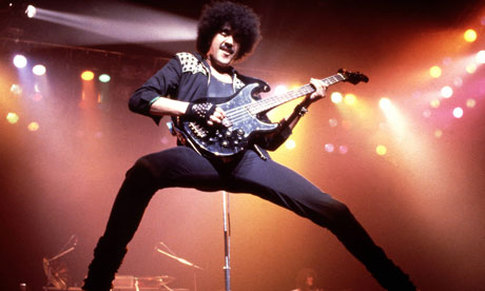 When Gary Moore left Thin Lizzy in 1979 he was replaced by Snowy White and the band continued to be a top draw for another three years, releasing two albums with White. But by 1983 Thin Lizzy had run its course.
That year’s tour (with John Sykes now the six-string partner to Gorham) was billed as their farewell tour, but it wasn’t as if Lynott had no musical life outside of Lizzy…

Prior to Lizzy’s split Lynott had released his first solo album, Solo on Soho, in 1980. It was a chart success in the UK and produced two hit singles.
But it was a case of diminishing returns by the time of his follow up, The Phil Lynott Album, released in 1982. It was a musical and commercial flop.
It did however spawn a surprising hit in ‘Yellow Pearl,’ which also became the theme for the long-running BBC music show Top of the Pops.

Those releases weren’t his first musical forays outside of Lizzy.
Other projects included an appearance as a featured character and vocalist on Jeff Wayne’s acclaimed musical adaptation of H. G. Wells’ War of the Worlds in 1978, where he took on the role of The Parson.
The following year he was part of The Greedies (a band featuring other Lizzy members and Steve Jones and Paul Cook of The Sex Pistols) who released the Christmas single ‘A Merry Jingle.’
1979 also saw the release of Gary Moore’s Back on the Streets album, a mix of fusion and hard rock tracks, with Lynott featured on a number of the songs including lead vocals on ‘Parisienne Walkways’ (released as a single the year before).

Post-Lizzy, Lynott formed Grand Slam, but contrary to what many hard-core Lynott or Lizzy fans may say or remember, the band were not as grand as their name suggested.
They toured throughout 1984, predominately featuring new Lynott/ Grand Slam songs, with only a smattering of his solo material performed.
The band also purposely stayed away from the Lizzy classics as they tried to establish their own identity and only three Lizzy songs were ever performed.

Grand Slam featured some excellent musicians including Magnum’s keyboard player Mark Stanway and the talented young guitarist Laurence Archer, previously of Stampede (another band lost to the early ‘80s melodic hard rock shuffle).
But the problem for Grand Slam was they were always going to be compared to Thin Lizzy and had to follow what Phil Lynott and the Lizzies had achieved.
They simply couldn’t.

Finding it hard to capture a large enough audience or any real interest from record labels, Grand Slam split in 1985.
The band did have some strong material of its own however such as ‘Sisters of Mercy’ and ‘Military Man.’ The latter found a home when Gary Moore recorded it in 1985, appearing on his Run for Cover album, with Lynott providing lead vocals and bass guitar.
Also contrary to the usual belief or fan-memory, Grand Slam weren’t always on top form live – but that was more to do with Lynott than the rest of the band...

As mentioned earlier, Phil Lynott bought into the whole rock star persona.
Trouble was, he also bought just about everything the dealers were selling.
He wasn’t the only one – nearly all the major players in Lizzy’s glory days had their own demons, but none more than Lynott. His drug use and alcohol dependency was an issue in the late '70s, but by the mid '80s it was a serious health concern.

I never saw a bad Lizzy performance.
No matter what state Lynott may have been in when he hit the stage he was always in control of the audience, and himself.
But by the time of Grand Slam his health was failing, certainly as regards stamina, and bootlegs that exist clearly present a musician running out of steam as the sets drew to a conclusion.
I saw Grand Slam perform and although they performed well, they were always in the shadow of Thin Lizzy. And Lynott was a shadow of his former self.
He was still charismatic, still very much the front man, but there was a noticeable drop in performance.

Performances in the studio were usually top-notch, however.
After Grand Slam disbanded Lynott continued to work on solo material and collaborated with other musicians.
He dueted on vocals with Gary Moore on the guitarist’s hit ‘Out in the Fields’ and late in the year issued what became his last ever release, the single ‘Nineteen.’
By December he was talking about further collaborations with Gary Moore and the possibility of a Thin Lizzy reformation.

However on the 25th December 1985 he collapsed at home and once taken to hospital was found to be suffering from a liver and kidney infection.
He died of heart failure and pneumonia ten days later.

Remembering Part 1 - Thin Lizzy (1971)
But that's not quite the end of this Remembering...

Lynott’s lyrical ability didn’t just start and end with his songs, he also wrote poetry.
Most of his published poetic works were Thin Lizzy lyrics – his first book of poems was published in 1974 and a second in 1977. A single volume edition was made available in 1997.

On what would have been his 56th birthday, August 20th 2005, the ultimate tribute was paid to Phil Lynott.
In a ceremony attended by his mother and former Lizzies Eric Bell, Brian Downey, Gary Moore, Brian Robertson, Scott Gorham and Darren Wharton (the band’s keyboard player in the '80s), a life-size bronze statue of the musician was unveiled on Harry Street in Dublin.

That night, at the Point Theatre in Dublin, Gary Moore hosted what was, and remains, the definitive live tribute to Lynott’s music.
Moore, backed by Downey and bass player Jonathan Noyce, performed a set of predominately classic Lizzy material with guitarists Robertson, Gorham and Bell guesting on specific songs.
The show was released on DVD in 2007 and Blu-ray in 2009, titled One Night in Dublin: A Tribute to Phil Lynott.

Over five years on from that tribute, and twenty-five years on from his death, many
are Remembering the part played in the history of rock music by the rock and roll poet with the roguish charm.
Ross Muir
January 2011


The audio tracks are presented to accompany the above article and in tribute to the memory of Phil Lynott. No infringement of copyright is intended.