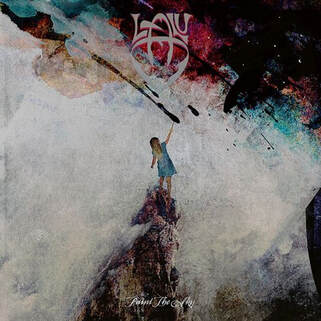 While the perfectly titled Oniric Metal (2005) and the far more intense Atomik Ark (2013) were interesting releases with some notable highlights, Paint the Sky is a classic case of the third time is the melodically sculpted, compositional charm.

And that's because Paint the Sky drops the sharp-edged metal intensity to accentuate the progressive, here embellished by interesting rhythmic structures, highly melodic arrangements (with solid riffage) and the voice of Damian Wilson (Arena, Headspace, Threshold).

It’s also worth noting that, even on first play-through, it's obvious Vivien Lalu couldn’t have made a better vocal choice (Wilson’s delivery, style and interpretation throughout is right on the melodic & lyrical mark).

Add the talents of guitarist/ bassist Joop Wolters (who featured on the Atomik Ark live shows) and drummer Jelly Cardarelli to the compositional & keyboard abilities of Vivien Lalu, plus a number of guest contributors (including Steve Walsh, Tony Franklin, Jordan Rudess and Simon Phillips), and you have more than enough to paint the sky in multi-coloured textures of melodic prog rock.

The album also carries AOR-prog accessibility in places, much like melodic proggers Starcastle and SAGA delivered so well in their more commercial phases.
Indeed opening number 'Reset to Preset' is the perfect hybrid of those two acts; a shimmering, vibrant, up-tempo and highly melodic six-and-a-half minutes with a deceptively funky rhythm, well-placed riffage and great harmony guitar lines from Joop Wolters.

Keyboardist Jens Johansson (Stratovarius), who also contributed to Atomik Ark, makes his first of three appearances on the lengthily titled 'Won’t Rest Until the Heat of the Earth Burns the Soles of Our Feet Down to the Bone,' a mid-paced riff-rocker with a slower and poppier middle 8.

The quirkier rhythm of the downtempo (but still riff-edged) 'Emotionalised' has a little Howard Jones about it (no bad thing) while the eight-minute title track, featuring, among others, Steve Walsh on additional vocals and bassist extraordinaire Tony Franklin, rocks like the prog-verbial.
A feisty and at times frantic (but controlled) array of keyboard lines and rapid-fire drum work from Jelly Cardarelli, 'Paint the Sky' conjures sonic images of not just the aforementioned Starcastle and SAGA but The Flower Kings and even a touch of Toto.

'Witness to the World' drops the pace to allow Damian Wilson to shine (like a lower register Jon Anderson) over a simple arrangement and interesting drum pattern; following number, the decidedly SAGA-esque 'Lost In Conversation,' retains the rhythmic tone but raises the melodically charged atmosphere.

The opening and closing vocal sections of 'Standing at The Gates Of Hell' bookend a fully instrumental prog-jazz sequence that, depending on your tastes, mean it will either be heard as one of the most interesting tracks on the album or the one song destined to be bypassed.

By melodic contrast 'The Chosen Ones', featuring a Jordan Rudess synth solo and Simone Mularoni on lead guitar, is seven-and-a-half minutes of uplifting, progressive balladeering with a soaring Damian Wilson vocal.
The short 'Sweet Asylum' acts as an equally sweet acoustic guitar interlude; it also doubles as the perfect precursor to the acoustic opening of 'We Are Strong,' which picks up the mid-tempo pace to shape itself as seven-and-a-half minutes of melodic prog that Jon Anderson would be more than happy to call his own.
(The closing "If you ever find yourself alone (we are strong)" lines are spookily Anderson-esque).

The atmospheric keyboards and vocal of vignette piece 'All of the Lights' complete the painted sky picture but not the album – that honour goes to an instrumental version of the title track, here featuring the none-too-shabby rhythm section of Tony Franklin and the exemplary drum skills of Simon Phillips.

Paint the Sky and colour the prog with bright shades of melody.
​Bravo monsieur Lalu.