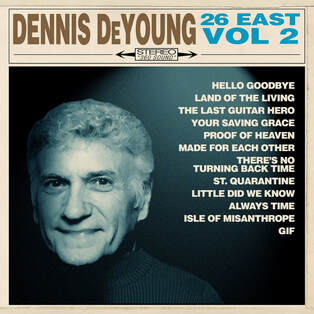 There was more than a touch of poignancy and autobiographical reflection on Dennis DeYoung’s previous album 26 East Vol 1, bolstered by some fine song writing and collaboration between DeYoung and his Chicago neighbour Jim Peterik, who encouraged DeYoung to get back in the studio for one more solo work hurrah.

Indeed such was their collaborative dovetailing the pair  completed a song Peterik brought to DeYoung's table before rattling off another eight songs together, five of which appeared on Vol 1.
With the creative juices flowing again and a number of DeYoung-Peterik songs still unused, a companion album/ sequel became inevitable.

The second and final instalment of 26 East is equally poignant and even more reflective in nature, accompanied by an ensemble of around a dozen musicians and backing singers (although DeYoung’s vocal is prominent both fore and aft), each of whom contribute to what is seemingly the final studio album from the man who was once the directional heart (and for many the missing soul) of Styx.

If you think the opening bars of 'Hello Goodbye' has such a distinctly Beatles in the mid-60s sound that it must be a homage or pastiche you’d be spot on – that homage continues across the entire four-and-a-half minutes of the number as Dennis DeYoung musically & lyrically pulls out every Fab Four reference (and obligatory "yeah!" and "ooh!" or five) and song-title trick in the Beatles book.
In short, a fun song of thanks to "four lads" that made such an impacting and lasting impression on the US in 1964 and every budding and wannabee American musician, including a then 17 year old Dennis DeYoung.

'Land of the Living' encapsulates and presents that heavy pop-rockin' style that Dennis DeYoung does so well, here featuring a lyric of re-energised faith in oneself and, one suspects, in music.

The similarly weighted 'Last Guitar Hero' is, as the title suggests, about a dying musical breed in the face of 21st streaming technology and corporate greed, while featured guitarist Tom Morello delivers blistering solo lines that are intentionally over-treated and overplayed to make their six-string point...
It wouldn’t be a Dennis DeYoung album without a ballad or three (and that’s exactly how many you get).
First up to the plate is 'Your Saving Grace,' which features the Michael Manson Gospel Choir vocally enhancing a number that, musically, comes across as 'Babe' meets off-Broadway musical.

That music theatre style (a Dennis DeYoung love) is even more prominent on the lyrically questioning 'Proof Of Heaven,' which also manages to carry an element of Jon Anderson meets classic era Styx across its broader scoped five-and-a-half minutes.

'Made For Each Other' (featuring a guitar solo so Brian May in sound and style Mr May might well be checking his audio archives to see if it’s one of his) is the love song of the album (again, it wouldn’t be a Dennis DeYoung album without one).
Following number, 'There’s No Turning Back Time,' then slow builds to become a lyrically reflective, light-rock look to the past (while acknowledging the past is just that).

'St. Quarantine' brings us very much back to the present (pandemic) times via a cleverly constructed, two-songs-in-one number (pomp rock opening, funkier blues finish) before 'Little Did We Know' returns to the tried and tested Dennis DeYoung style of theatrical rock.

'Always Time' is gentle and quintessential Dennis DeYoung balladeering.
Some may find the song syrupy but it is, in truth, a slightly ethereal, delicate and deeply poignant waltz-styled number that lyrically reasons while it may seem as if we "always have time," that time is, by nature, always running out.

The Best of DeYoung Times is saved for last via anthemic six minute number 'Isle of Misanthrope' and the two minute Styx closer, 'Grand Finale.'

The former is a Suite Madame Blues for the planet, building from an opening that intentionally reflects that classic Styx number to a Grand Illusion of musical pomp and lyrical circumstance that predicts a not so bright outcome (a commentary, as Dennis DeYoung stated in pre-release press, on "the confounding nature of mankind under the guise of ancient times").
Yet the song carries a glimmer of song ending hope by way of a possible space-faring future, where we "sailed away" (nice touch Dennis) on a course set for better days.

The faithful revisit of The Grand Illusion’s 'Grand Finale' is a fitting ending to both 26 East Vol 2 and Dennis DeYoung’s recording career – made all the more poignant by DeYoung’s son Matthew DeYoung featuring on drums and signing off on the ride cymbal given to him by John Panozzo many years ago.

"And deep inside we’re all the same."
Amen to that Brother Dennis and thanks for the last 50 years; from those earliest Styx/ Wooden Nickel label recordings to your Grand studio Finale, it’s been a musical pleasure.