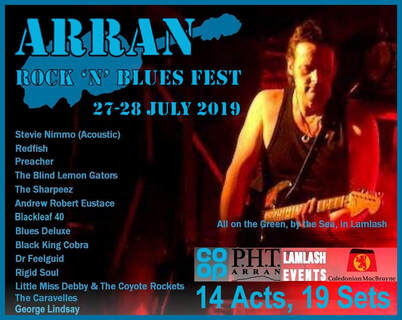 The 2019 Arran Rock 'N' Blues Fest started much as last year’s ended, or at least took its lead (vocal) from the headline culmination of the inaugural event.

Singer and two-band front man Andy Massie closed out the 2018 ARNBF in his guise as "Alex" of the Sensational Alex Harvey Experience, the top tribute to the late & great Alex Harvey’s 70s ensemble.
​
It was fitting therefore that in his persona of Andy Brilleaux, fronting Dr Feelguid, that top-notch tribute quartet kicked off the 2019 ARNBF with a collection of classic Dr Feelgood songs that would be familiar to the majority of the sold-out event crowd.
​
From 'Roxette' through to 'Back in the Night' and on, of course, to 'Milk & Alcohol,' they didn’t miss an R&B Pub Rock beat in a 45 minute set that was as highly effective as it was Feelgood fun.

It was important to the ARNBF 2019 organisers that there was an Ayrshire music presence this time around.
First up to represent Ayrshire were Rigid Soul, three young lads whose talents belie their age.
Fronted by Kyle Hood on guitar and vocals, their set of originals and covers was extremely well received as was their Sunday set at The Pierhead Tavern (known locally as the PHT).
The trio moved with ease between originals such as weighty, mid-tempo number 'Five Out of Four' to a bluesy, rocking out cover of Black Sabbath’s 'Wicked World.' 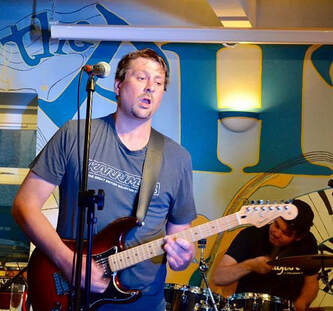 Eustace - pulling double-shift blues duty at ARNBF 2019
The Andrew Robert Eustace Band (known more simply as Eustace) went beyond the call of blues rocking duty, having played three sets at ButeFest the day before and two at ARNBF (their main stage set and later session at the PHT).

Fair to say Andrew Robert Eustace gave it everything.
The big voiced big man of the Glasgow blues rock scene and his band both belted it out ('Different Sides,' the feisty title track of the new album) and slowed it down ('Blues Kind') before finishing with the Celtic blues boogie of 'Crooked Old Dog.'

The Blind Lemon Gators, the delta/ roots blues band featuring vocalist Greig Taylor, were another pulling extra set duty at Arran, with not one or two but three excellent performances, each a showcase for forthcoming album, Gatorville.

While Grieg Taylor’s blues enthused voice and passion for roots blues is the vocal point of the band it’s not the only focal point of the band – Iain Donaldson’s slide work is as emotive (the band’s cover of 'Goodnight Irene') as it is tasty (the up-tempo 'Blues Man’s Shoes'); he’s also one of the most expressive exponents of slide guitar this side of the bluesy Atlantic.

​The reason The Sharpeez are sub-titled "Maximum Rhythm & Blues Band" was underlined emphatically with a primarily up-tempo set that was based around latest and excellent album, Wild One (the funkier R&B of 'Heartache Express,' the change-of-pace title track) and previous release, the equally impressive Mississippi Thrill (the southern affected 'Tower of Love,' the pedal down R&B of 'Trucking on the E15'). 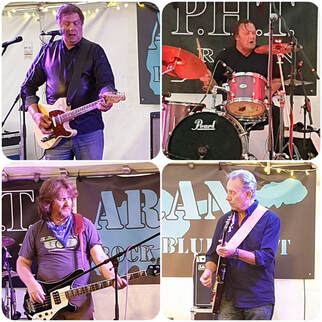 Well-known and well-loved on the circuit with the Stevie Nimmo Trio and as one half of the Nimmo Brothers (with younger sibling, King King’s Alan Nimmo), Stevie Nimmo also excels in the solo acoustic environment.
​
Nimmo's rich, bluesy voice resonated across the heavyweight 'Chains of Hope' from latest album Sky Won’t Fall (the first time he had played the song live in acoustic clothing), a vibrant take of Storyville’s 'Good Day for the Blues' (a version of which can be found on his acoustic based solo album Wynds of Life) and guaranteed sing-a-long cover 'Ain’t No Love in the Heart of the City.'

While the main stage blues of ARNBF was over for the evening, the music certainly wasn’t.
​
One of Glasgow’s best and most original up and coming bands, Black King Cobra, fronted by the engaging Callum Moran and animated guitarist Ross Clark, weren’t so much groove rock on the night as groove raucous (take a bow, 'Quake' and a busted bass drum skin).
The quartet also ramped it up with boisterous renditions of rhythm 'n' sway number 'Ball and Chain' and the groove-infectious 'Wrack 'N' Ruin.'

​Closing out the marquee main stage stage for the Saturday were Ayrshire founded band, Preacher, whose brand of melodic progressive rock, culled from their two studio albums Signals and Aftermath, was the perfect finish to a fine, eight band main day event.
​
Fronted by vocalist and rhythm guitarist Martin Murphy and featuring fluid melodic lead guitar from Murphy senior's son, Greg Murphy, Preacher’s’ Floyd-meets-Bowie soundscapes ('Aftermath,' 'Always') floated out of the marquee venue and across Lamlash Bay to lap at the shores of The Holy Isle (where one hopes the Buddhists' enjoyed the musical 'Signals' received).

The music continued at the PHT with a late night set from the Blind Lemon Gators, the live music bar having already hosted the sounds of Blues Deluxe, The Caravelles, George Lindsay, Little Miss Debby and a jam session hosted by Glasgow guitarist Pete Parisetti.

Sunday was always going to be about the event as much as the music; with Arran in Sunday Mode the adjoining tents, food and drink stalls and smaller marquees promoting and selling local wares were frequented as much as the main stage venue. 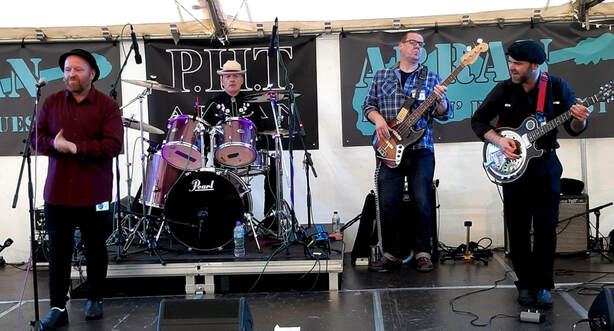 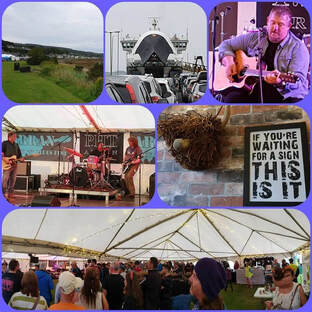 The Blind Lemon Gators opened the three band afternoon with another Gatorville showcase (this time in the company of Redfish bassist Rod Mackay; the ‘Gators play live as both a trio and quartet) before the appearance of the third Ayrshire act to be featured on the ARNBF bill, Blackleaf 40.

The band, fronted by dual vocalists Julie Merry and Chad Rae, put on a show that delighted the main stage audience; a short, sharp R&B and blues mix of originals (from debut album Artificial Bliss) and a select choice of covers.
Two new songs performed, 'Run & Hide' and 'What If,' bode well for the group’s forthcoming second album.

Closing out proceedings were the highly regarded R&B, soul & blues band Redfish, who had their Album Launch show (for excellent debut album, Souls) in Carlisle just two days previous.
Another band who can mix it up (performing a number of covers that complement their original material), Redfish focussed their set around Souls, with the musically contrasting '(Kick Up) Hell’s Delight,' 'Hallelujah Road' and the wonderfully titled 'Hate the Song but Love the Singer' being particular highlights.

While the talented quintet, fronted by Stumblin' Harris, all play their parts special mention must be given to guitarist Martin McDonald, arguably the most authentic sounding player on the UK blues rock circuit (B.B. King’s 'Sweet Little Angel,' nuff said) and the band’s secret weapon, highly animated can’t-take-you-eyes-off-him keyboardist Fraser Clark.
The fact Clark is also an outstanding player gives the band the best of both visual and musical worlds.

With the PHT also hosting Sunday music – Rigid Soul’s second set of the weekend (so impacting as to have Redfish make mention of it during their own set), Blues Deluxe doing their own second stint and a further jam session with Pete Parisetti, a great weekend of blues and rock came to a close on Lamlash Green.

That there was such a successful and sold-out 14 acts,
19 sets weekend of blues and rock on "Scotland in Miniature" (compered by Scotland’s "Godfather of Rock" Tom Russell), is down to the efforts and hard work of organisers Jane Howe of the PHT and Lamlash Events, assistance from North Ayrshire Council, sponsorship as provided by CalMac Ferries and the 'Big' Co-op and all of the festival's volunteers and helpers.
​
FabricationsHQ also had a promotional part to play but that was small support fish compared to the work Jane Howe had to put in to make this a reality.

But the fact so many were asking immediately after the event if there will be another next year... that's the true marker of the Arran Rock 'N' Blues Festival's success.