In 2005 Ross Muir completed and made available the eBook 65 Years of The Bat.
But the work wasn't just a chronological history of the Batman character and his place in popular culture.
65 Years of the Bat also looked at just what makes Batman such an enduring fictional character and tracked the author's association with the iconic super-hero through the decades as both a Bat-fan and a genuine enthusiast of the comic book medium.

Each of the one hundred pages was a 'Batchapter' dedicated to either information on the history of comic books themselves or a specific topic, era or highlight (or lowlight) within Bruce Wayne's own career.

In 2010 Muir started to revisit the eBook and completed a fully updated and expanded edition at the end of that year. It was made available in March 2011.
The new edition includes a 'Five Years On' update, which includes Muir's take on how he feels DC Comics have lost the comic book plot as regards this famous fictional character, with the modern-day Bat more authentically portrayed on the big screen and other mediums than he is in his comic book home.

The following is an excerpt from the Introduction of the Updated and Expanded edition...

"Batman. A name known to anyone familiar with the world of entertainment.
Even beyond that. Those not in the habit of picking up comic books, graphic novels, watching fictional escapism TV or going to the movies will almost certainly recognise the name.
When this eBook was originally completed, Batman had been part of the fictional lore of the civilised world for sixty-five years - retirement age in many countries - but it doesn’t look like he is retiring or hanging up the cape and cowl anytime soon.

There are many enduring fictional franchises that have survived through the decades: Superman, Sherlock Holmes, James Bond and Dracula, to name but four.
They all continue to reinvent themselves as and when necessary through the medium of the comic book, the written word, television or the movies. Or a combination of those mediums.
Yet many, myself included, have always been drawn to the creature of the night, battling petty criminals and world-threatening foes alike, while flitting from rooftop to rooftop with the assistance of a few gadgets and supreme physical and mental skills.

What this Bat-book will do is take you through the many eras of this comic book legend and hopefully - via my own thoughts and comments - give you a chance to get a gist of the history of Batman while at the same time bringing you up to speed with the world of the Bat in the early 21st Century."


65 Years of the Bat ©2005, 2011 Ross Muir. All rights reserved.
No portion may be reprinted without express permission of the copyright holder. 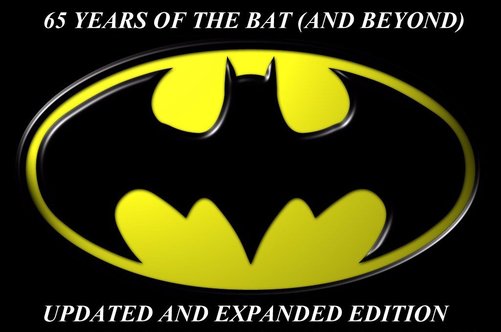