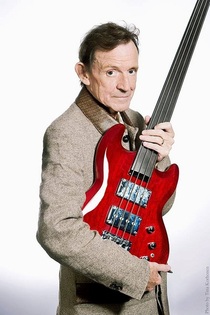 The inevitable facts of the matter are that rock and pop stars of the classic 60’s an 70’s era are now ‘of an age’ that invariably leads to short notices on their sad, unfortunate or even to-be-expected passing.

But there was certainly more than a passing thought given to musician, singer and songwriter Jack Bruce when he succumbed to liver disease on the 25th of October.

Jack Bruce, part of the legendary blues rock power-trio Cream alongside Eric Clapton and Ginger Baker, was in a state of declining health by the early millennium having been diagnosed with liver cancer.

A near fatal liver transplant in 2003 brought with it a long recovery period but by 2004 Bruce was well enough to begin performing again; in May 2005 he reunited with Clapton and Baker for the Cream reunion concerts at the Royal Albert Hall in London and the shows at New York's Madison Square Garden five months later.

John Symon Asher "Jack" Bruce, born in the Scottish town of Bishopbriggs in Lanarkshire, was a classically trained cellist and jazz-influenced bass player who would go on to become one of rock’s greatest ever bassists; Bruce also developed in to a powerful and very distinct vocalist.

In the early part of his career Jack Bruce played in a number of Big Band, jazz and blues based acts including Alexis Korner’s Blues Incorporated and the Graham Bond Organisation (the latter also featured Ginger Baker).
Brief appearances in John Mayall & The Bluesbreakers (with Eric Clapton) and Manfred Mann (performing on the No.1 UK hit single 'Pretty Flamingo') followed before Bruce became part of the studio supergroup Powerhouse featuring, amongst others, Eric Clapton, Steve Winwood and Paul Jones.

But it was the next supergroup that Jack Bruce was involved in that truly made a musical mark.

Cream’s musical legacy and four year, four studio album run is rightly regarded as some of the finest and most definitive blues rock ever produced but post-Cream Jack Bruce went on to release fourteen solo albums and was involved in many collaborative projects, a number of which also garnered deserved critical acclaim.

In the early 80’s Jack Bruce returned to the power-trio format when he teamed up with guitarist Robin Trower for the albums BLT and Truce (featuring drummers Bill Lordan and Reg Isodore respectively).
Twenty-five years later Bruce and Trower reunited for their third album Seven Moons, featuring Gary Husband on drums. 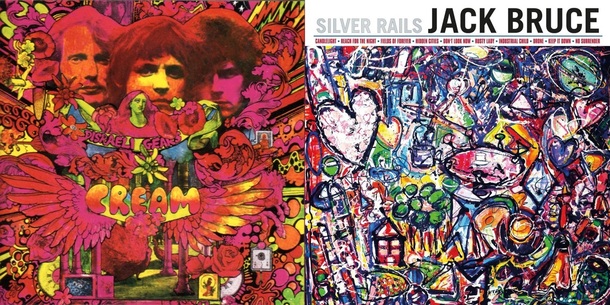 With albums such as Disraeli Gears, Cream forged a relatively short-lived but massively successful                 and highly influential career. More than four and a half decades later Silver Rails, the eclectic and
final solo album from Jack Bruce, proved the legendary musician still had something to say.

Jack Bruce’s finest moment outside of Cream came in 1993 when he formed BBM with Gary Moore and Ginger Baker.
Their outstanding and critically acclaimed album Around the Next Dream was a Top 10 chart success in the UK but the subsequent tour was cut short due to arguments between Bruce and Baker (something that had been part of the pairs' working chemistry since their days in the Graham Bond Organisation).

Following the 2005 Cream reunion shows Jack Bruce, still recovering from his liver transplant two years prior, kept live work to a minimum but a notable 2006 appearance was performing Cream and solo numbers with the HR (Hessischer Rundfunk) Big Band, subsequently released on CD in Germany in 2007.

While performances increased as Jack Bruce’s strength improved bouts of ill-health would restrict the musician in later years (the April 2009 US dates scheduled for the Trower-Bruce-Husband Seven Moons tour were cancelled), but Bruce was still in the public eye – in January 2011 he received a Lifetime Achievement award at the International Bassist Awards, becoming only the third bassist to do so (previous winners being Jaco Pastorius and Nathan Watts).

In June 2011 Jack Bruce performed with his Big Blues Band at London’s Royal Festival Hall, which was celebrating its 60th anniversary; a number of Big Blues Band festival appearances followed.

The BBC Scotland documentary on Jack Bruce entitled The Man behind the Bass was broadcast in February 2012 and featured new versions of six career defining and career spanning songs from Bruce’s musical history – 'We're Going Wrong,' 'Sunshine of Your Love,' 'Weird of Hermiston,' 'Theme for an Imaginary Western,' 'Keep it Down' and 'Child Song.'

2012 saw the release of Spectrum Road, adventurous jazz-rock fusion from Jack Bruce, guitarist Vernon Reid, keyboard player John Medeski and drummer Cindy Blackman Santana.
Spectrum Road (taken from the title of a track on the 1969 Tony Williams Lifetime album Emergency; Bruce would later join Lifetime and appeared on two albums) captured the essence of the original Lifetime but went well beyond tribute to create a 21st century statement in jazz-rock.

Jack Bruce released his final studio album in March 2014.
Entitled Silver Rails and released on the Esoteric Antenna label, it was an eclectic mix of songs but with that distinct Jack Bruce stamp throughout.
Silver Rails featured contributions from many musicians including Robin Trower, Phil Manzanera, Uli Jon Roth and Bernie Marsden but it’s also a family affair – The Deluxe Edition of the album features a behind the scenes documentary directed by Jack Bruce's daughter Kyla Simone Bruce while his son Malcolm Bruce pre-produced the album and played guitar on a number of the songs.
His daughter Natascha Eleonoré (aka the recording artist Aruba Red) provides harmony backing vocal on the number 'Hidden Cities.'

On later recordings and performances Jack Bruce’s vocals were discernibly weaker and thinner; but they were still distinctly Jack Bruce.
By contrast there was very little tail-off in his versatile and melodic four-string talents.

At the peak of his powers Jack Bruce was part of the Cream of the power trio and blues rock crop.
Four and a half decades later, in his seventy-first year, there was still No Surrender to the cause, even in the face of declining health.

Ross Muir
October 2014
The audio track 'No Surrender' is presented to accompany this article and in tribute to the memory of Jack Bruce. No infringement of copyright is intended.