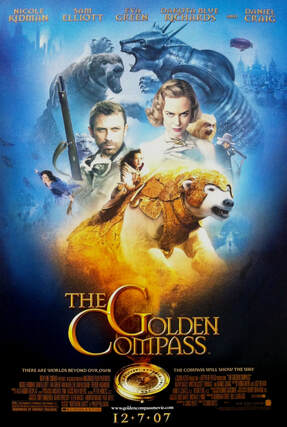 Letter to The Catholic League (re. The Golden Compass)

I'm not religious, which is hardly a revelation (sorry) to those that know me and should be of no consequence to others.
However, I do have a confession to make (sorry again) – if I ever had the power I would abolish all organised Religion and promote Faith, as there is a world of difference in my (good) book.

And talking of books (and their interpretations)...

The Golden Compass, the 2007 fantasy movie based on Northern Lights (the first book of His Dark Materials trilogy by Phillip Pullman) was, in my opinion, not just an excellent adaptation but a great movie.
And great family entertainment.

Unfortunately while the early Box Office returns were encouraging there is no question the huge downturn in ongoing interest was mechanised by The Catholic League, who campaigned for moviegoers to boycott the film on the grounds the movie may encourage children to read the books which the League claims promotes atheism.

The Catholic League for Religious and Civil Rights (to give them their full name) has its headquarters in New York and although not an official agency of the Catholic church, the power wielded by such bodies and the authority they carry is, for me, everything that is wrong with organised Religion.

I wrote to The Catholic League in 2008 regarding their successful campaign to have the film company and producers back down from considering any further sequels.
I have yet to receive a reply, but then it must be very time consuming gathering together and burning the collected works of Phillip Pullman. 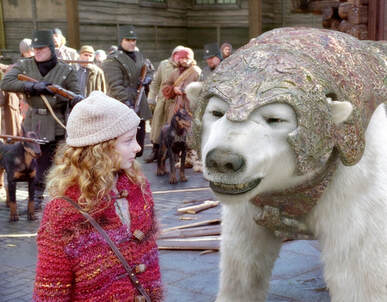 To Whom It May Concern (God, presumably)...

I recently read with interest and not a little sadness your (now successful) campaign against The Golden Compass movie/ His Dark Materials novels.
Although coming late to the table (room for a thirteenth?) with the damage already done, I feel the following should be addressed:

"...Philip Pullman's trilogy, His Dark Materials, would make a great Christmas gift. Not if we can help it!"

Really.
On whose authority do you have the power, position, moral high ground and right to decide such issues and create such campaigns?
God's? I doubt it. Can't see your one dimensional opinionated diatribes being worthy of any omnipotent being's time.

And if the aim of The Catholic League is to stop children reading these books, then why fight so hard to get the second and third films cancelled?
Most people who have seen and enjoyed The Golden Compass will now want to read the books because the furore you have caused has actually increased interest in the original trilogy.

I happened to be in a book shop just last weekend and one girl was asking if they had the books as she had seen the first movie and, knowing there would now be no sequels, wanted to pick up all three books.

Is it just me or does this all seem like insanity?

Those with Faith or individual belief will not have their Faith or belief swayed by books or movies which are clearly within the category of 'fantasy fiction.'
And Phillip Pullman's world is another world in another dimension.
Do you feel so threatened that you have to banish what you perceive as heresy in all such worlds?

You don't believe in such otherworldly nonsense, surely?

On the other side of the coin many will see a belief in God as far fetched as talking polar bears, witches and magic compasses, but that's just a fact of atheistic life.
Try accepting it, even if you don't agree with it. Each to their own.
Everyone has the right to believe what they want; turn the other cheek (isn't that the Christian thing to do?)

Phillip Pullman's books are no more suggestive than the Bible and he certainly doesn't mentally influence as many children as the Church does.
I was going to add "and physically damage" before "as many children" to the above but that would be unfair and unfounded.
Wouldn't it?

Get your own House of God in order before throwing your weight around at others.
And people who live in glass churches shouldn't interfere with anything. Or anybody.
Even my mother, a good Catholic girl (emphasis on good, if not girl), agrees with me and that doesn't happen very often, trust me.

"Each book becomes progressively more aggressive in its denigration of Christianity and promotion of atheism."
Could you point me to the specific passages please?

"Atheism for kids. That is what Philip Pullman sells."
Again, if you could show me the parts where he advocates this, or has been quoted as such, ta.

"...if unsuspecting Christian parents take their children to see the movie, they may very well find it engaging and then buy Pullman's books for Christmas. That's the problem."
That's the problem because...? Sorry, you've lost me.

Surely the "unsuspecting Christian parents" will, like you, immediately see the sin, heresy and horrors of this evil incarnate?
Either that or there is no sin, heresy or horror to begin with. Nothing to see here, folks, please move along.
Or are you saying Christians are so gullible that they will listen to, or believe, anything?

It worked though, so kudos to you and the ridiculous amount of power you seem to wield in the "Land of the Free" (ahem).
And first time I've seen 'goal' spelt a, g, e, n, d, a.

At the end of the day The Golden Compass and His Dark Materials trilogy are works of fiction... God knows you must have read at least one in your lifetime.

Ross Muir
Happily writing from the land of the talking Polar Bears.

p.s. How did Harry Potter slip the net then? Hogwarts School curriculum acceptable, is it?