Muirsical Exceptions (to the Rock and Roll Rule) #2

The Muirsical Exceptions covered in my original article were based on some of the most successful, well-known or influential bands and their albums from the classic eras of rock. Specifically, 70's and 80's heavy, progressive and melodic rock.
But, like many of the bands I mentioned, the exceptions continue to this 21st Century Muirsical day.

I find that a number of critically acclaimed and/ or commercially successful bands formed in the 1990s or later do nothing, or at least very little, for me.
Radiohead and Coldplay are two such examples, although there are of course exceptions to that rule too.

Later instances of exceptions are probably better described as a case of 'The Emperor’s New Clothes’ however, as I tend to have my hand up at the back of the crowd in "excuse me, but..." mode when some of the musical institutions that are seldom criticised display their latest wares...

In 2009 U2 and Bon Jovi released ‘No Line of the Horizon’ and ‘The Circle’ respectively, with critics generally fawning over the two albums and fans falling over one another in their rush to grab a copy of one or both.

They are certainly not bad albums and both were hugely successful, but the fact remains those bands are so big globally they could release any level of material from the sublime to the ridiculous and still be guaranteed huge sales and chart success.
Both albums have also been mentioned in despatches as being "one of the best" by the respective artists, and in some cases rated as their "best ever."
I can't agree.

For most people Bon Jovi are associated with classic melodic rock anthems such as ‘You Give Love a Bad Name’ and favoured when album releases such as ‘Slippery When Wet’ hit the shelves, but for me their most mature and accomplished album is ‘Keep The Faith.'

U2, since their return to musical form (as regards the favoured or classic U2 sound) with ‘All That You Can’t Leave Behind‘ and ‘How to Dismantle an Atomic Bomb’ can do no wrong. Hence the guaranteed success to 'No Line on the Horizon.'
Yet for me 'No Line' is no better or worse than either of those two albums and certainly not as exceptional as truly landmark or classic releases like ‘The Unforgettable Fire’ or ‘The Joshua Tree.'

However U2 are unarguably one of the biggest and most succesful rock bands on the planet, so such reactions to any releases or events by that band are to be expected.
As can be said of two other true giants of rock...

The 2007 Led Zeppelin reunion in connection with the benefit concert for the late Ahmet Ertegun and his associated Education Fund met with an unprecedented level of anticipation and fan reaction.
Millions applied for tickets, and thousands would have sold their mother for an opportunity to be at the O2 Arena during their performance.

I, on the other hand, wouldn’t have sold anyone’s mother let alone my own, but then I was never a huge fan of Led Zeppelin.
Before the cries of “sacrilege!” are heard Over the Hills and Far Away, I would point out that I fully acknowledge and appreciate their ‘previous’, truly understand the fan fervour and firmly believe that ‘IV’ and ‘Physical Graffiti’ are two albums that should be in every discerning rock fans home (and you can make an argument for most of the others).

As regards the show I have heard it (what Zep-head or curious rock fan hasn’t?) and as an event it is hard to beat, but as a Zeppelin performance those diehards and critics claiming it to be as good as they ever were are simply seeing those Emperor's New Clothes back on parade.

It was confident, competent and had some truly classic Zeppelin moments such as ‘Kashmir,' but with Robert Plant having a dramatically different register from those heady histrionic countertenor days it was never going to be a case of the song remaining the same. The noticeably and necessary detuned numbers in the set testified to that, and there were a few less than stellar moments.

Kudos to the band though for (thus far) refusing to have that show officially released and letting it remain an event, and therefore a poignant musical memory,as opposed to a musical memento via DVD or CD audio release.
However if they ever do release it I could help with the cover, which I trust would be received with the humour intended and hope that no-one takes (their own musical) exception... 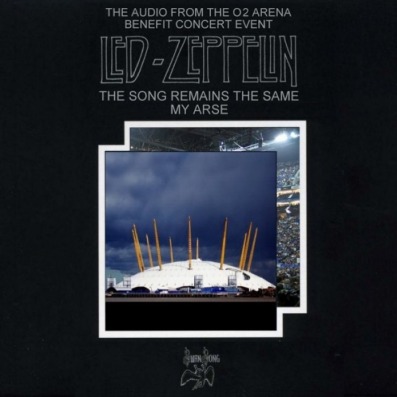 Not only do I respect the decision not to release this performance under what was (and probably still is) intense pressure and fan demand to do so, I also have the greatest of respect for Robert Plant and his decision to say no to any full reformation or tour on the back of its success (even though the other members were keen to do just that).

The singer has since hinted that further one-off shows should not be discounted, but it’s clear through his actions and comments he feels that having been there, done that and worn the tour T-shirt it would be a mistake to jump back on board the Zeppelin for further travels around the world.

Good for you Mr P, couldn’t agree more. More times than not you can’t go back.
But admitting or accepting that seems to be an issue for some artists and certainly for many fans.
And having had earlier short-set reunions (Live Aid 1985 and the Atlantic Records 40th Anniversary show in 1988) that didn’t exactly produce their finest moments, the 2007 performance is arguably as good as it was ever going to get in relation to flying the Zeppelin successfully again.

AC/DC are one of the finest practitioners of high energy riff-rock and roll in the business, but for me their finest 40 minutes is 1979’s classic ‘Highway to Hell’ even though their most successful period followed shortly after with ‘Back in Black.’ The latter was the first album to feature vocalist Brian Johnson after Bon Scott's untimely death in 1980.

In 2008 AC/DC released 'Black Ice,' their first studio album in eight years.
Such was the anticipation for this album that it made history by debuting at #1 in the album charts of twenty-nine countries. A year after release it had sold approximately 6.5 million copies. I don't have a copy of that one, either.

With the album so well received and the rumour that their next tour may be their last, the Black Ice world tour did monster business and was a massive success.
I was in the minority of rock fans that had no interest in grabbing a ticket.

The problem for me is AC/DC's trademark sound is based on repeating a highly successful formula and I only need 'Highway' plus a compilation featuring the best of their other tracks to satisfy my needs as regards this band and that style.
Both 'Back in Black' and 'Black Ice' do contain some classic riff-rock and roll tracks though, particularly the former.

There are many other examples I could provide, but to end the brace of articles on my Muirsical exceptions to the musical norm I would first leave you with a story, before finishing with the associated album cover...

The one time I saw AC/DC I didn’t actually see them.
The U.K. Monsters of Rock Festival at Donnington Park in 1981 featured AC/DC as head-liners, but I had already decided to go due to the confirmed appearances of Slade, Blue Oyster Cult and Whitesnake.
I also took a good book and a pocket torch…

Slade stole the show for me, while B.O.C. certainly did not (for a number of reasons, but having to follow Slade didn’t help).
As regards AC/DC?
By the time the sun went down and Brian Johnson had smacked the (Hells) Bell that came down from the lighting rig during the band's arrival to the stage I was on the move. By the time it had struck the sixth of its thirteen chimes I was back on the coach that brought us down from Scotland and comfy in the back seat.

However the buses and tour coaches couldn’t turn their lights on until concerts end when the punters were leaving and/or looking for their specific car, coach or route out. So I was in the dark.
Hence the pocket torch and good book. 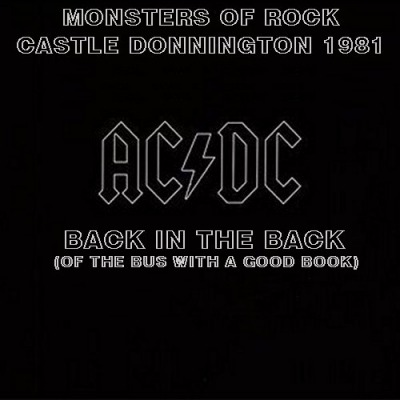 Could still hear the buggers, though.

AC/DC's 1981 Donnington set has never been released in audio or video form, but if you ever decide to add it to your official discography lads, and need help with the packaging, give me a call.